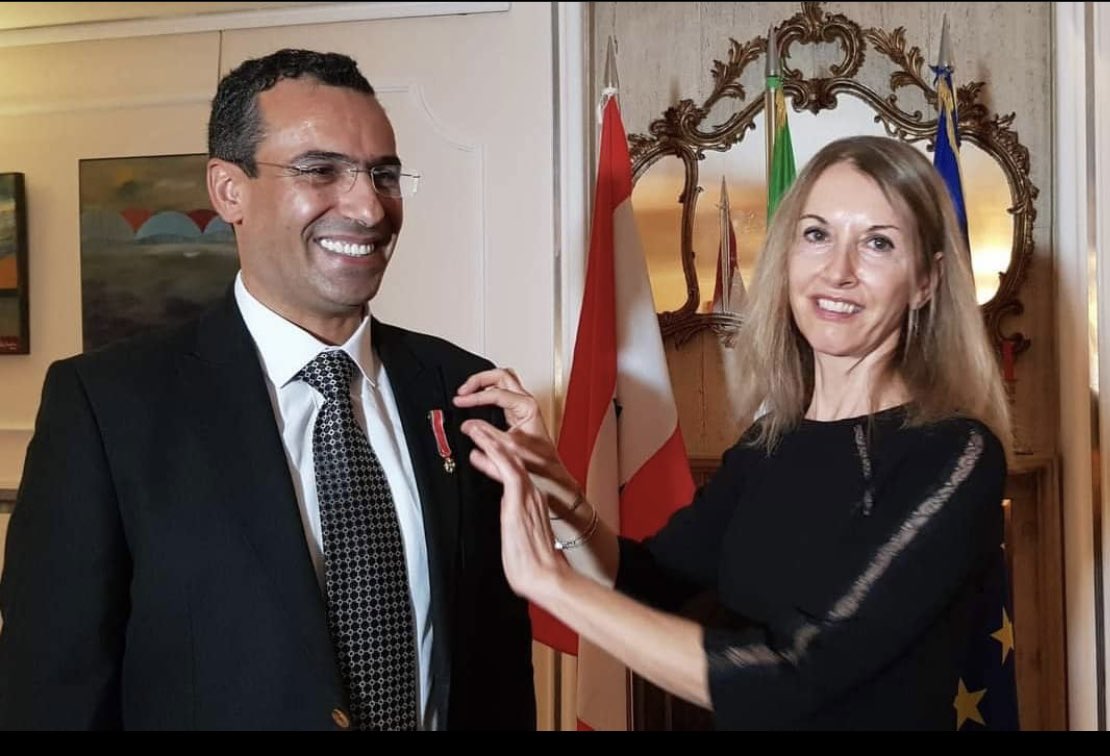 A Lebanese scientist who specializes in the preservation of his country’s environment has been honored with a knighthood by the Italian Republic.

Nizar Hani, the general manager of the Shouf Biosphere Reserve, the largest of Lebanon’s nature reserves, was awarded the Order of the Star of Italy by Italian Ambassador to Beirut Nicoletta Bombardiere during a ceremony at the ambassador’s residence in Naccache on Friday.

This distinction, Italy’s second-highest civilian honor, is given by order of the Italian president to Italians or foreigners who have acquired special merit in the promotion of friendly relations and cooperation between the republic and other countries.ad

The Shouf Biosphere Reserve, a UNESCO-recognized site that is blanketed with oak and juniper forests, stretches from Dahr Al-Baidar in the north to the mountains of Niha in the south. The reserve’s most famous attractions are its three magnificent cedar forests of Maasser Al-Shouf, Barouk and Ain Zhalta-Bmohary, which account for a quarter of the remaining cedar forests in Lebanon. Some of its trees are estimated to be 2,000 years old.

A popular destination for hiking and trekking, as well as bird-watching, mountain biking and snowshoeing, the reserve’s large size makes it a good location for the conservation of medium-sized mammals, such as the wolf and Lebanese jungle cat, as well as various species of plant.

“By decorating Nizar Hany, we decorate the Shouf Biosphere Reserve and all those who have contributed to this success story,” said Bombardiere.

“Today, the Shouf reserve is a living laboratory of integrated strategies that respond to the ultimate goal of protecting and promoting the territory, taking care of its fragility and exploiting at the same time its natural strengths and resilience, and engaging the local communities, whose involvement is critical for any lasting achievement.ad

“With this decoration, Italy intends to encourage political leaders and civil society in Lebanon to raise their engagement in the environmental issues in the country as a matter of priority and to increase their joint efforts to reduce the environmental impact, in fields like solid waste, water treatment, air quality and energy production,” she added.

The Italian envoy encouraged “everyone to bear in mind that, if the environment in Lebanon is doomed, there is not a spare Lebanon. There is just one Lebanon and it must be saved. As well as there is only one Mediterranean, to which Italy and Lebanon belong, that must be preserved.”

Hani thanked Italy and all those who have supported the reserve, including the Italian government’s Agency for International Development Cooperation. In addition, he expressed gratitude to UN institutions and other donors, as well as the Lebanese Ministry of Environment, which runs all the country’s nature reserves.

“All these efforts made the Shouf Biosphere Reserve a Mediterranean success story for nature protection, conservation and mitigation of climate change,” he said, while stressing the importance of the support Italy has provided to the reserve and to many other environmental protection activities, “especially those that support the local communities.”

Tags:
the largest of Lebanon’s nature reserves, the Shouf Biosphere Reserve, was awarded the Order of the Star of Italy by Italian Ambassador to Beirut Nicoletta Bombardiere