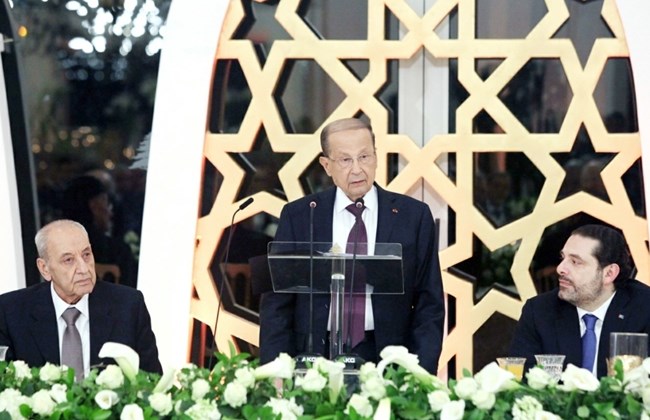 Beirut: The Lebanese Leaders had agreed Thursday on the essential elements of a new electoral law, including the adoption of a proportional voting system.

President Michel Aoun then signed a decree allowing Parliament to convene for an extraordinary session to vote on the law later this month.

Aoun, Prime Minister Saad Hariri and Speaker Nabih Berri all indicated that talks have been positive, as they expect a new electoral law to be announced within days.

“Reaching an electoral law in the coming days will be the start for restoring confidence,” Aoun said during a speech at an iftar at the presidential palace in Baabda. “It will show that there is a will to improve popular representation ... and balance it horizontally among the [different] constituents of all Lebanese people and vertically within each constituency [itself].

Hariri confirmed that an electoral law adopting a proportional system across 15 districts would be applied, adding that the final touches will be in place before the conclusion of Parliament’s mandate on June 20.

“We have agreed on the framework for the electoral law and there is a committee that will handle the details and the final issues,” Hariri said. “The atmosphere between ... Berri and Aoun was positive.”

The speaker also appeared optimistic as he left Baabda Palace.

“Everything is fine,” he told reporters. “The main points have been agreed and I had suggested that a small Cabinet committee be formed to assess the technical details.”

Aoun, in a rare tweet, announced the news that he had signed the decree calling for Parliament to convene for an extraordinary session that would last from June 7 until June 20.

“The schedule of this meeting will be exclusively limited to the endorsement of a new law to elect members of Parliament,” the decree shared by Aoun read. It came shortly before the iftar dinner hosted at the Baabda Palace by the president, which effectively included all of Lebanon’s politicians and senior officials.

By signing the decree, Aoun averted a potential constitutional crisis with Berri. Earlier this week the speaker said Parliament would press on with regular sessions beyond the end of the legislative period.

Citing jurisprudence by French constitutional experts, Berri claimed that since Aoun had used his prerogative under Article 59 of the constitution in April and delayed Parliament’s session for a month, the current legislative period would still be in effect.

Aoun has in effect allowed Parliament to legislate until June 20, meaning lawmakers have until June 19 to pass an electoral law to govern upcoming parliamentary elections.

Following the dinner, Aoun met with senior members of the Free Patriotic Movement who act as his advisers. Aoun listened to consultations by FPM President Gebran Bassil, MP Alain Aoun, MP Ibrahim Kanaan and former Ambassador Abdullah Bou Habib who briefed him on their position on the electoral law, especially in relation to vote tallying procedures and the preferential vote.

A political source told The Daily Star that they will also be discussing the threshold for candidates to win electoral seats in any district, adding that candidates would need to win at least 10 percent of a district’s vote in order to have the right to claim one of its parliamentary seats.

The results of the meeting will be relayed to the other political parties for their feedback.

Progressive Socialist Party head MP Walid Jumblatt held a closed-door meeting with Aoun after the iftar. “The atmosphere is positive and we are on the verge of a new electoral law. There will be no extension [of Parliament’s term] and we will not go back to the 1960 [electoral law],” he said after the consultation. “The atmosphere is positive and this evening was blessed, thanks be to God.”

Lebanese Forces head Samir Geagea also described the developments as “positive.” “We are working on the remaining details,” he said. “I expect that we will reach, in the coming days, a new electoral law.”

Prior to entering the dinner, Geagea described the law, which was proposed by Lebanese Forces deputy chief MP George Adwan, as “one of the best laws we can reach.”

Foreign Minister Gebran Bassil Friday said that there were shortcomings in the new electoral law, following a meeting with Maronite Patriarch Beshara Rai in Bkirki.

"I admitted [to the Maronite Patriarch] that we could have done better," Bassil said in a press conference. "But we have to do the best we can in any situation."

"The proportionality law is not the 1960 [majoritarian] law; it's far better," he added. "Everything we're doing in the electoral law discussions is to maintain coexistence."

Bassil said that despite recent developments, the struggle for "granting rights and improving representation is ongoing."

"Many Lebanese still don't feel like they're fairly represented, even with this law," he said.

Despite the positive developments, a delay in elections is inevitable. A so-called “technical” extension has previously been pre-empted by Interior Minister Nouhad Machnouk, a position he reaffirmed Thursday during a meeting with Aoun.

The consultation was intended for Machnouk to hand over a detailed report indicating the time that would be needed to set the groundwork for elections to be held under a proportional voting system.“It is obvious that the atmosphere is positive and there is a possibility to reach an electoral law within a few days,” Machnouk said following his meeting with Aoun, adding that elections would not likely take place before November. “This is a detail that would be agreed upon after the law is endorsed,” he said.

“What is important now is endorsing the electoral law. The rest would be a technical extension based on the period we need to train those involved on what is referred to as electronic sorting,” Machnouk added, noting that a copy of the report would be sent to Berri and Hariri.