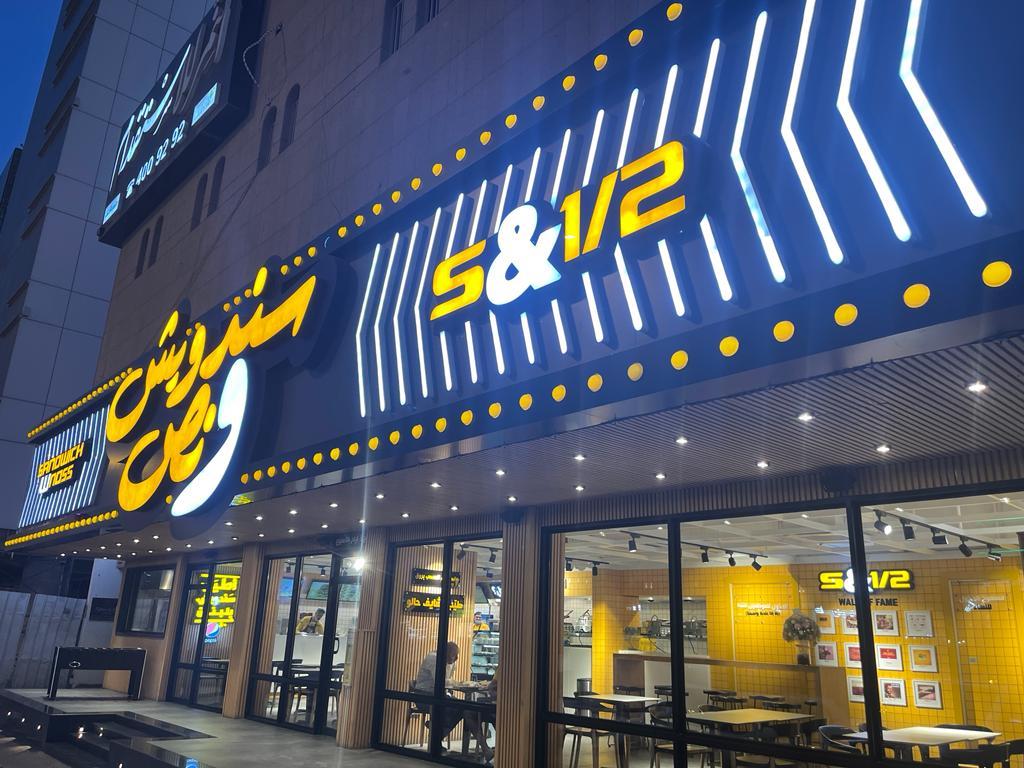 The scale and scope of Lebanon’s - economic - depression are leading to a collapse of the most basic public services. Prolonged inaction by the authorities has worsened economic conditions and deepened the financial crisis. It’s a struggle for both civilians and entrepreneurs. The latter are re-inventing themselves and taking their business successfully abroad. One is Rony Abou Saab (45), the creative mind behind Sandwich w Noss, who just opened his first branch in Riyadh.

By Arthur Blok
Sandwich w Noss (Arabic for ‘sandwich and a half’) was a success from day one. In less than five years, Abou Saab opened seven restaurants in Lebanon, employing over 150. The idea behind ‘sandwich and a half’ is that one sandwich is never enough, and two is too much. “One and a half is just enough to feel satisfied,” said Abou Saab a few days after opening the first foreign affiliate in Saudi Arabia.

In the past years, Abou Saab received many requests from potential franchisees. He explained that selecting a foreign partner is not as easy as it might look. “It is a pretty complex process. You have to look at things such as the quality and expertise of the operator before even considering putting our forces together.”

Parties in Saudi Arabia were the most favorable for the time being. In the past year, they prepared an ambitious plan for a Lebanese international fast food chain in the Kingdom. “We will be starting with three locations over the next four months with two more to roll by the end of next year,” said Abou Saab.

Why start in Saudi Arabia and not in other lucrative markets like the UAE or Qatar? “Saudi is a very strategic market. In addition, there is much appetite for what we have to offer. At the same time, I believe we can establish the brand smoothly and efficiently. But more countries will be added to the list in the future.”

His formula is so attractive that in the past years suddenly came up with similar names. In the UAE, various restaurants added ‘W Noss’ to their names can be found. That is something Abou Saab worries about.

Abou Saab: “And you will see more of them in the future as we expand in other markets. I never worry about imitators; I focus more on authentic competitors. It is something that happens commonly with successful brands. Usually, such actions do not transform into big brands. I have my energy focus on things such as quality, service, and marketing of the brand.”

“I believe customers are smart enough to know which one is the authentic one. I never start a brand with the mentality to beat a competitor; I focus more on improving my brand and making it even better. At least that is time well spent.”

Lebanese street food restaurants have been franchised all over the GCC and are now taking over the region. Zaatar w Zeit, over 70 branches abroad, Malak al Tawouk has been expanding rapidly since its first foreign adventure in Jordan. A local set-up formula called ‘Allo Beirut’ is also growing fast. While another famous local Lebanese brand, Roadster, just opened the doors of its third branch opened its doors in the UAE.

Abou Saab: “We have conducted a massive upgrade for the brand on all levels in Saudi, starting with the launch of a new menu, architecture upgrade, branding, and communication. The new Sandwich w Noss formula is now an even stronger and well-established Lebanese brand. Ready for expansion in terms of model and structure.”

Selling Lebanese food is a very lucrative business Abou Saab admits. Is the UAE next on his list? “The UAE has loads of international exposure and is a very sophisticated market; we are negotiating with potential leads. Things are looking promising. Hopefully, I can soon share more when the deal is locked.”