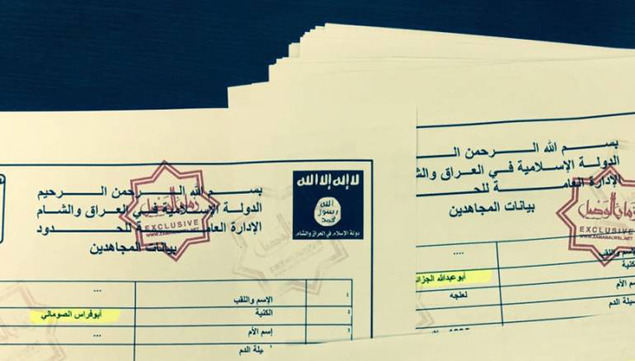 THE LEVANT NEWS — What’s your first and last name? Your education and work experience? Do you have recommendations?

And are you willing to be a suicide attacker, or would you prefer to be a fighter for ISIS?

Those were among the questions allegedly posed to would-be jihadis on what appears to be a kind of job application for the terror group. They were obtained, in a batch of leaked ISIS documents, by Germany’s intelligence agency, a Syrian newspaper and other news organizations, including Britain’s Sky News.

While some responses are mundane, others make it obvious this isn’t just any application profile or data base.

Take, for instance, one applicant’s request to be a suicide attacker. His reason, as spelled out in a document: He suffers from headaches from shrapnel and wants to be dispatched as soon as possible.

There’s also an Australian who is also willing to go on a suicide mission. But he worries his short-sightedness might be a hurdle. Plus, he doesn’t know how to drive manual transmission vehicles.

Questions include ‘level of obedience’

The forms are tied to one of the world’s most reviled, barbaric, ruthless terrorist organizations. But they’re also a function of bureaucracy.

Zaman Al-Wasl, a newspaper supportive of forces fighting against both Syrian President Bashar al-Assad’s troops and terror groups like ISIS, published 122 pages of documents it claimed to get from an ISIS defector. These 122 documents, out of about 1,700 overall reportedly obtained by the same publication, only pertain to self-identifying suicide attackers from Arab countries.

German intelligence officials said they, too, have similar if not identical documents, though they didn’t detail how they got them.

While they include lines to be filled out later — like the site and time of a person’s death — the content mostly consists of questions and answers posed at a border crossing into territory controlled by the so-called Islamic State, according to Zaman Al-Wasl.

A black ISIS flag is neatly stamped on the right corner. At the top left corner is the terror group’s version of a border entry stamp. The Arabic script is typed up, neatly arranged in rows and columns, with “private” stamped at the bottom.

Others are slightly more specific and speak to the organization they want to join — like the person’s religiosity (or “Sharia level”), jihad experience and their “level of obedience.”

The dates of the border entry stamps suggest the documents published by Zaman Al-Wasl date back to no earlier than 2013.

That means that the people questioned could have gone into ISIS-controlled territory, have been turned away or perhaps fought for their terror group in Syria and Iraq and then perhaps left. If they aren’t in the war zone, one fear is that they could have brought their ISIS approach, tactics and mindset elsewhere — perhaps proving a grave threat to other countries worldwide.

The documents suggest the recruits came from many places including Tunisia, Libya, France and Germany, as well as Syria and Iraq.

Markus Koths, a spokesman for the German federal criminal police, said they appear to be authentic.

“We believe that it is very likely these are genuine documents,” Koths said. “We are taking these into consideration of our law enforcement measures and security. “

British Home Secretary Theresa May also addressed the documents, and said the “severe threat” posed by ISIS underscores the importance of countries sharing information and taking other steps against the group.

“We have seen the attacks perpetrated on mainland Europe over the past year,” May said, referring to terrorism in Paris and elsewhere. “That is why it is so important for us to work together to counter this threat.”

The form featuring 23 questions and other items is short and to the point, delving into the recruits’ background and way of life. Here’s the information asked of each applicant:

— Address and place of birth

— Personal properties you leaving behind

— The level of obedience

— Date of death and place