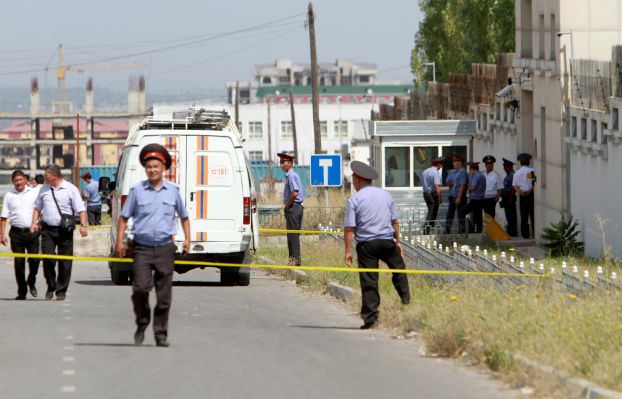 By Olga Dzyubenko for Reuters - A suicide bomb attack on the Chinese embassy in the Kyrgyz capital last week was ordered by Uighur militants active in Syria and carried out by a member of the East Turkestan Islamic movement, Kyrgyzstan's state security service said on Tuesday.

The suicide bomber, whose car rammed the gates of the embassy on Aug. 30, was an ethnic Uighur who held a Tajik passport in the name of Zoir Khalilov, the GKNB security service said in a statement.

Three embassy staff suffered minor injuries in the attack and were taken to hospital. China condemned the attack and urged Kyrgyz authorities to quickly investigate.

Listed as a terrorist organisation by the United States and Russia, the Nusra Front has renamed itself Jabhat Fatah al-Sham and said in July it had ended its relationship with al Qaeda.

The attack on the Chinese embassy was coordinated through a native of Kyrgyzstan living in Turkey, the Kyrgyz secret service said.

It said an arrest warrant had been issued for another native of southern Kyrgyzstan, an explosives specialist trained in Syria and holder of a Tajik passport, who helped to prepare the attack but flew to Istanbul several hours before the explosion.

Five Kyrgyz citizens suspected of complicity in the bomb attack have been detained, the GKNB said. An international arrest warrant has been issued for two other Kyrgyz citizens living in Turkey, it said.

Apart from the ethnic Uighur suspected of having carried out the attack, all the others accused of ordering, financing and preparing it come from two southern Kyrgyz regions in the Ferghana Valley.

The fertile but overpopulated and largely impoverished valley, which Kyrgyzstan shares with Uzbekistan and Tajikistan has become a source of radical Islamists in Central Asia, from where hundreds of young people have gone to fight for Islamic State and its allies in Syria.