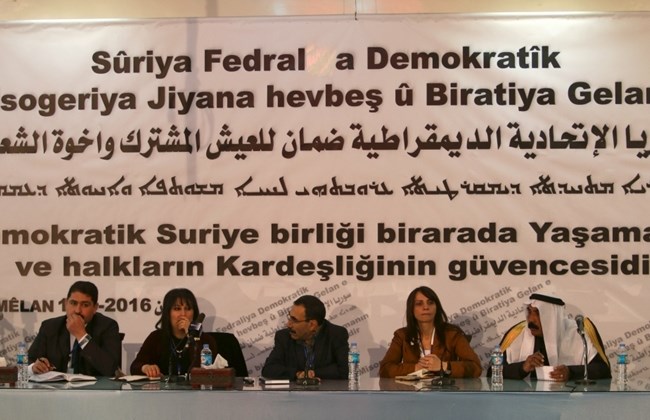 More than 150 delegates from Kurdish, Arab, Assyrian and other parties meeting in the Syrian town of Rmeilan agreed to create a “federal system” unifying territory run by Kurds across several Syrian provinces.

Both the Syrian government and the main opposition immediately rejected the move, which was expected to create more obstacles at already thorny peace talks underway in Switzerland, from which the Kurdish parties have so far been excluded.

The regime charged the move would “encroach on Syria’s territorial unity,” while the High Negotiations Committee (HNC) opposition coalition slammed it as “a misadventure (that) is detrimental to the Kurdish cause and the Syrian cause in general.”

Speaking ahead of the Kurdish declaration, the U.N.’s mediator in the talks Staffan de Mistura branded the federalism push as possibly “dangerous,” according to the Swiss news agency ATS.

The Kurds control more than 10 percent of Syria’s territory and three-quarters of its border with Turkey, and the Kurdish People’s Protection Units (YPG) are considered one of the most effective forces fighting ISIS.

Yet so far they have been blocked from joining the peace talks due to harsh opposition from Turkey, which considers the YPG a Syrian affiliate of the Kurdistan Workers’ Party (PKK), an outlawed group that has waged a decades-long insurgency against Ankara.

Washington-based analyst Mutlu Civiroglu said the Kurdish announcement was a political message “to the United Nations, the U.S., Russia, and especially to Geneva, that if you ignore us, we are going to determine our future by ourselves.”

The latest round of U.N.-mediated talks aimed at ending Syria’s tangled war, which has killed more than 270,000 people, have been taking place since Monday.

Observers agree the atmosphere this time around has been more constructive than during multiple previous failed peace efforts, largely thanks to a partial ceasefire introduced on Feb. 27 that remains broadly in place.

But the talks were muddied Wednesday when de Mistura met for the first time with a second opposition coalition, which includes the so-called Moscow Group and is demanding an equal seat at the negotiating table.

That would not sit well with the HNC, which insists it must remain the sole opposition representative in the talks.

The HNC is expected to stress that position when it has a second official meeting with de Mistura on Thursday afternoon.

The entry into the talks of the Moscow Group, along with the so-called Cairo and Istana groups, followed Russia’s surprise decision this week to withdraw most of its forces from Syria, where they had been fighting in support of President Bashar Assad.

Western governments had voiced hopes the pullout, expected to be completed by the end of the week, could boost the talks by pressuring Assad.

But Russian President Vladimir Putin said Thursday his country could ramp up its presence again if needed “within several hours.”

Moscow is set to maintain its air base and a naval facility in Syria and Putin indicated that Russia’s drawdown would not significantly change the balance of forces in Syria.

In Geneva, it was not immediately clear what impact the inclusion of the pro-Moscow group would have on the talks, or whether it was a gesture from de Mistura to Russia following the pullout.

The U.N. has not yet clarified what role the Moscow Group would play, but its co-president Randa Kassis told reporters Wednesday her camp was in Geneva “as a negotiating delegation.”

The Moscow Group is tolerated by Damascus and has not insisted on Assad’s departure as a condition for creating a transitional government, which is an unequivocal HNC demand.

The group’s inclusion could be good news for the Kurds: it insisted Wednesday on the need to “lift the embargo” against bringing in Kurdish delegates.

A member of the Syrian government delegation meanwhile told AFP the Kurds would be “invited to the talks in the next stage.”