Kurds call on Syrian regime to intervene in Afrin battle

Kurdish militias fighting against Turkey in the Syrian enclave of Afrin have called on the government of Bashar al-Assad to intervene and protect the area’s borders.

The latest development, nearly a week into Turkey’s military offensive, could undermine Kurdish aspirations for self-governance and, if heeded, could set the stage for a direct military confrontation between Ankara and Damascus.

It could also create an open alliance between the US-backed Kurdish forces and a government that Washington had sought to unseat for years.

“While we insist that we will continue to defend Afrin against rabid external attacks and will confront the Turkish attempts at occupying Afrin, we invite the Syrian state to carry out its sovereign duties towards Afrin and to protect its borders with Turkey from attack,” the autonomous authority governing Afrin said in a statement on Thursday.

Ankara launched a military offensive into Afrin spearheaded by its Syrian rebel allies on Saturday in order to oust the People’s Protection Units (YPG) from the Kurdish enclave, which borders Turkey.

The government of Recep Tayyip Erdoğan has seethed over the support of the US-led coalition against Isis for the YPG, which led the ground campaign to drive Islamic State from northern Syria.

Turkey considers the YPG and its affiliates as the Syrian wing of the Kurdistan Workers party (PKK), a designated terrorist group that has fought a decades-long insurgency against the Turkish state.

The Afrin offensive was launched after the US announced it wanted to build a 30,000 strong border guard to patrol Syria’s frontiers that would include members of the YPG, a prospect that Turkey considers a major national security threat.

A Turkish foreign ministry official declined to comment on the YPG announcement – or on whether Turkey would fight Syrian government forces if they intervened in Afrin. The Syrian government did not comment, but has condemned Turkey’s intervention as a violation of sovereignty.

The Afrin statement is another twist to the Syrian crisis. The YPG and its political arm have long sought to establish an autonomous, self-governing canton in northern Syria, so its calls for a direct intervention by Assad’s government is a setback for those aspirations.

The YPG had often publicly positioned itself as anti-Assad, pointing to the rampant discrimination and abuses against the Syrian Kurds by the state, which had long denied them identity papers and other rights. But the militia and its political arms have been accused of cooperating closely with the regime.

The call is also an indication of the Kurdish militias’ anger that the US and Russia have been unable to deter Turkey. 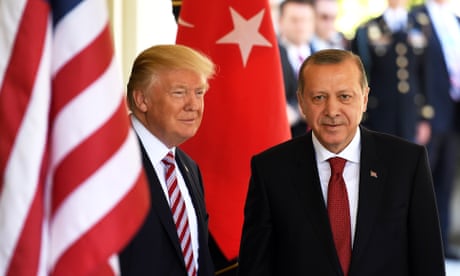 The US, which has directly armed the YPG and provided the air cover for the ground operations in Raqqa, has done little apart from urging Turkey to exercise self-restraint in an effort to repair damaged relations with Ankara.

Moscow, which has occasionally cooperated with the Kurds and often insists that they should have a seat at the table in peace negotiations, allowed Ankara to use the airspace above Afrin to conduct the campaign.

It is unclear if the Syrian government will answer Kurdish calls for an intervention, and whether Turkey would halt its operation if that happened or engage in direct hostilities with the regime.

However, such a development could lead to a broader crisis that would endanger peace talks and draw in Assad’s allies, Russia and Iran.

Betrayed Macron won’t give up on roadmap, targets Hezbollah