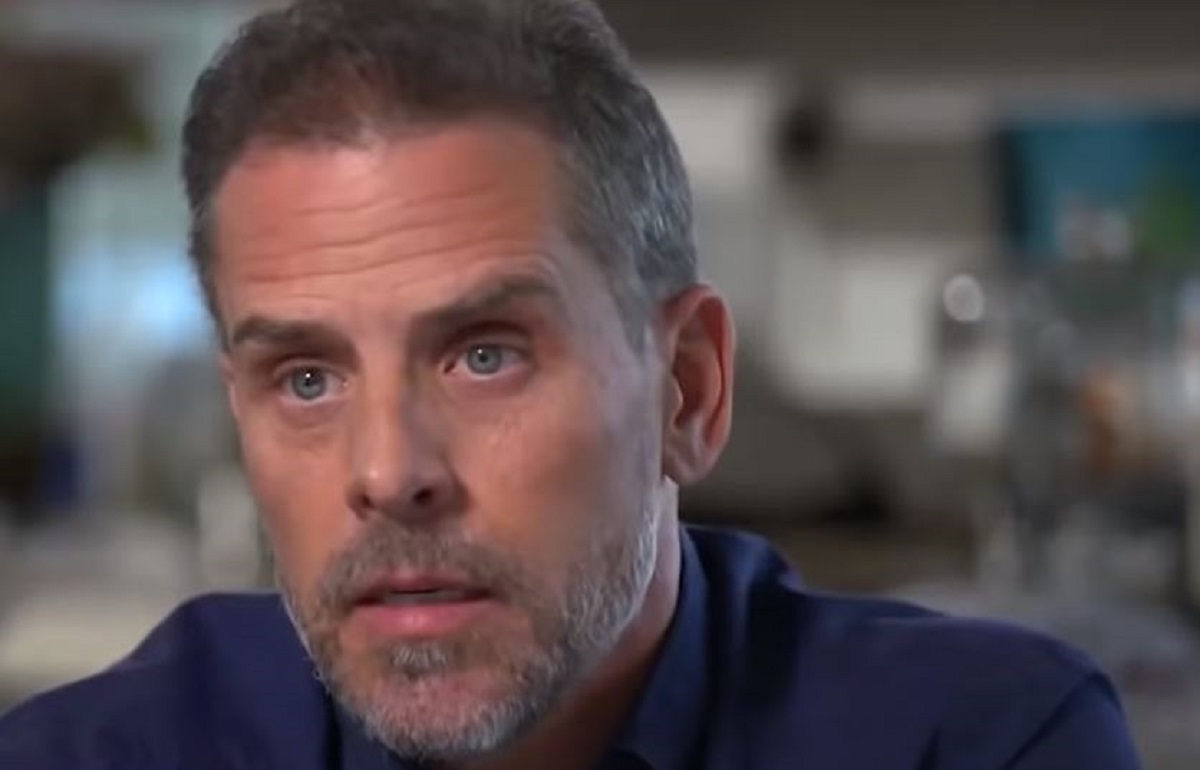 When US President Joe Biden accused his Russian counterpart Vladimir Putin on Monday of preparing to use chemical or biological weapons in Ukraine, he inadvertently lifted the lid on a long-simmering scandal involving his son, Hunter Biden.

At a White House briefing on March 21, President Biden said Putin’s “back is against the wall” in Ukraine and that he may orchestrate a “false flag” operation to justify the use of outlawed weapons against civilian and military targets.

“We’ve seen it before,” said President Biden. “He’s run a lot of false-flag operations. Whenever he starts talking about something he thinks NATO, Ukraine, or the United States is about to do, it means he’s getting ready to do it.”

The Kremlin responded to Joe Biden’s statements by accusing his son of helping to facilitate a biological weapons program in Ukraine, thus putting Hunter Biden’s scandalous business dealings when his father was the US vice president back in the public limelight. But more on that, later.

Conservative critics allege the president’s second son partnered with his uncle James Biden to exploit Joe Biden’s political influence, first as a long-serving Delaware senator and later as a two-term vice president to Barack Obama, to gain lucrative contracts in Ukraine — allegations that both deny.

Few in the mainstream media ran the story when it first emerged. Social media giants like Facebook and Twitter even blocked posts referencing the allegations, including stories by the conservative-leaning New York Post, prior to the 2020 election.

The controversy first went public after Hunter Biden took his personal laptop to a Delaware computer repair store in April 2019 — the same month his father officially launched his bid for the presidency — but forgot to pick it up.

Legally, the laptop became the property of the store’s owner, who took its contents, including thousands of Hunter Biden’s personal emails, and turned them over to Republican activists.

Those emails, according to several published accounts, include lurid details of a decadent lifestyle, as well as information pertaining to Hunter Biden’s multi-million-dollar foreign contracts with China and Ukraine.

In 2014, Hunter Biden joined Ukraine’s state-owned natural gas company Burisma as a $1 million-per-year consultant. Less than a month after his then-vice president father visited Ukraine and met Burisma executives in April that year, the lucrative contracts began rolling in.

Burisma itself has been plagued by allegations of corruption. Furthermore, critics claim Hunter Biden lacked the necessary qualifications to consult for the firm — except for the fact that his father was vice president and involved in developing Ukraine policy.

A top US diplomat, stationed in Kiev in a classified email sent to the State Department in 2016, warned that Hunter Biden's business dealings in Ukraine while his father was still vice president “undercut” anti-corruption efforts in the country.

The email, dated Nov. 22, 2016, was written by George Kent, who was at the time the deputy chief of mission at the US Embassy in Ukraine.

He detailed a discussion about a “saga” surrounding the case against Mykola Zlochevsky, a former Ukrainian natural resources minister and founder of Burisma Holdings, according to the email.

A New York Post report of Oct. 4, 2020, quoting Hunter Biden’s laptop emails, claimed Zlochevsky “introduced Vice President Joe Biden to a top executive at Burisma less than a year before the elder Biden pressured government officials in Ukraine into firing a prosecutor who was investigating the company.”https://29966556afb74cc63a1c30cf62b051c4.safeframe.googlesyndication.com/safeframe/1-0-38/html/container.htmlAds by optAd360

The meeting is mentioned in a message of appreciation that Vadym Pozharskyi, an adviser to the board of Burisma, allegedly sent Hunter Biden on April 17, 2015, about a year after Hunter joined the Burisma board.

In 2017, Hunter also joined the board of the China-based private equity fund Bohai Harvest RST of Shanghai Equity Investment Fund Management Co. with a 10 percent stake.

BHR was founded in 2013 by Bohai Industrial Investment Fund Management Co., which is controlled by the Bank of China. Its founders included Hunter Biden’s investment firm, Rosemont Seneca Partners.

It is not unusual for the children of powerful US politicians to end up in top jobs or to be accused of profiting from their parents’ political clout.

President Donald Trump’s sons and daughter were constantly in the news for what opponents called “influence peddling” while he was in office and since.

Several investigations are ongoing into the dealings of Trump’s children, Ivanka and Donald Trump Jr., including one launched this January by the New York attorney general.

In their turn, Republicans in Congress introduced a resolution on Oct. 15, 2019, that provided specific details culled from the laptop and demanded an investigation into Hunter Biden’s Ukraine dealings.

In the final weeks before the November 2020 presidential election, President Biden dismissed the allegations against his son, branding them nothing more than “Russian disinformation” and “a last-ditch effort to smear me and my family.”

However, Republican Congressman Darrell Issa of California’s 50th District, who has led the charge to expose Hunter Biden’s role in Ukraine and China, told Arab News there was more than enough evidence to warrant a Congressional probe.

“What I can’t live with is the fact that Facebook and Twitter and the most major media players shut down the truth with the help of more than 50 of the most informed people in the intelligence world all saying they concluded this was false information.

“That is a conspiracy of monumental size. This is the most consequential political scandal since Watergate, and it deserves an investigation in Congress no less robust and no less bipartisan than that one.”

When Joe Biden accused Moscow this week of preparing to use biological or chemical weapons, the Russians entered the Hunter Biden fray, leveraging the corruption allegations to accuse the US president’s son of funding the production of biological weapons in Ukraine.

Igor Kirillov, head of radiation, chemical and biological defenses at the Russian defense ministry, said on Thursday that Hunter Biden was directly involved in US plans to deploy weapons of mass destruction in Ukraine.

Kirillov accused him of bankrolling “the Pentagon’s biological weapons program in Ukraine” through an investment fund, the Kremlin-backed Sputnik International news agency reported.https://29966556afb74cc63a1c30cf62b051c4.safeframe.googlesyndication.com/safeframe/1-0-38/html/container.htmlAds by optAd360

“Incoming materials have allowed us to trace the scheme of interaction between US government bodies and Ukraine’s biolabs,” Kirillov told a media briefing.

“The involvement in the financing of these activities by structures close to the current US leadership, in particular the Rosemont Seneca investment fund managed by Hunter Biden, draws attention to itself. The scale of the program is impressive.”

Citing a common conspiracy theory deployed by Russian state-backed media outlets, Kirillov reportedly said USAID and the CDC, with the backing of liberal philanthropist George Soros, were responsible for the establishment of 31 laboratories at 14 locations across Ukraine.

There is no credible evidence to justify the claim.

Liberal media quickly came to President Biden’s defense following the Russian allegation. Julia Davis, a columnist for the Daily Beast, tweeted: “If you thought Russian propaganda was ever ‘sophisticated,’ I hate to break it to you: it was always quite stupid. Still is. Here is their latest gem: Hunter Biden funded bio-labs in Ukraine. Handcrafted for Fox News.”

The allegations have also renewed Republican resolve to push for an investigation, which is likely to cost the Democrats in November’s midterm elections.

“Big Tech, the mainstream media and the Democrats’ deep state intelligence community want to either rewrite the history of their collusion — or erase it entirely,” Issa told Arab News.

“We’re not going to let them do that. These letters are putting everyone on notice: Real accountability is going to happen. And we won’t rest until the full truth is known.

“We already know for a fact that Big Tech colluded with some of the nation’s most powerful media and most influential Democrat partisan in the intelligence community to suppress the truth, stop the public access to fact-based journalism, and cover up Biden family scandals.”

The White House did not respond to requests from Arab News for comment.