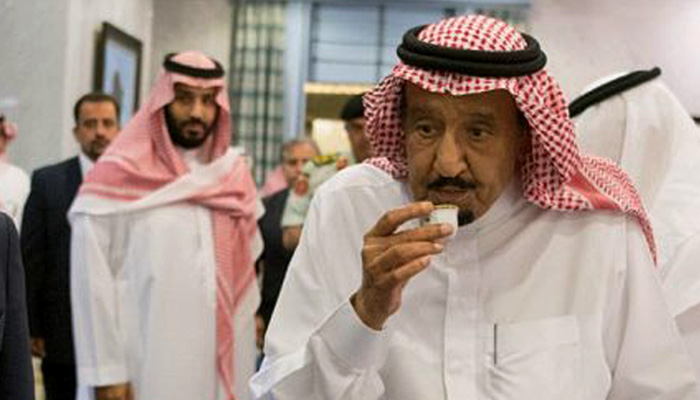 Image credits: King Salman and the heir to the throne

State television aired a video clip of the king leaving the hospital with his son Crown Prince Mohammed bin Salman close by.

The king will rest for several days according to his treatment plan.

King Salman, the Custodian of the Two Holy Mosques, became ruler of the Kingdom in 2015.

He underwent gallbladder surgery in 2020.

Gulf leaders sent cables of congratulations to the monarch on Wednesday.https://platform.twitter.com/embed/Tweet.html?creatorScreenName=Arab_News&creatorUserId=69172612&dnt=false&embedId=twitter-widget-13&features=eyJ0Zndfc2tlbGV0b25fbG9hZGluZ18xMzM5OCI6eyJidWNrZXQiOiJjdGEiLCJ2ZXJzaW9uIjpudWxsfSwidGZ3X3NwYWNlX2NhcmQiOnsiYnVja2V0Ijoib2ZmIiwidmVyc2lvbiI6bnVsbH0sInRmd19ob3Jpem9uX3R3ZWV0X2VtYmVkXzk1NTUiOnsiYnVja2V0IjoiaHRlIiwidmVyc2lvbiI6bnVsbH0sInRmd190b3BpY19waXZvdHNfZW1iZWRfMTM1NDUiOnsiYnVja2V0IjoiYWRkX2FjdGlvbl9idXR0b24iLCJ2ZXJzaW9uIjo0fSwidGZ3X2V4cGVyaW1lbnRzX2Nvb2tpZV9leHBpcmF0aW9uIjp7ImJ1Y2tldCI6MTIwOTYwMCwidmVyc2lvbiI6bnVsbH19&frame=false&hideCard=false&hideThread=false&id=1504037546417926144&lang=en&origin=https%3A%2F%2Fwww.arabnews.com%2Fnode%2F2043656%2Fsaudi-arabia&sessionId=27c27a94db57dd2a662d70a9c730335b1c18d149&siteScreenName=Arab_News&siteUserId=69172612&theme=light&widgetsVersion=2582c61%3A1645036219416&width=550px

Crown prince Mohammed bin Salman received a phone call on Wednesday from Egyptian president Abdel Fattah El-Sis, during which he was reassured about the health of King Salman.