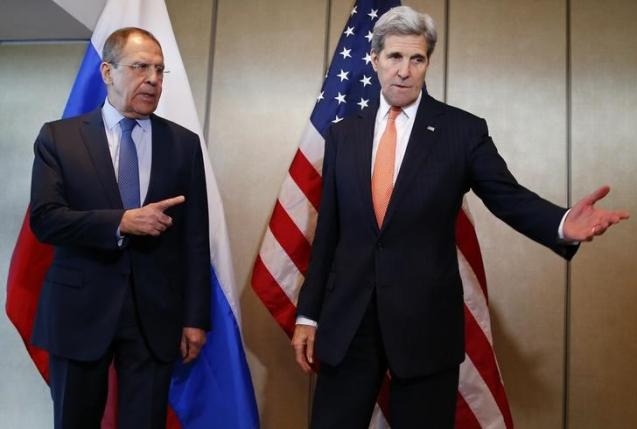 Kerry wants ‘all or nothing’ truce at Syria talks

MUNICH/BEIRUT | BY JOHN IRISH AND SULEIMAN AL-KHALIDI for Reuters —

Major powers were beginning a new round of Syria peace talks on Thursday focusing on calls for a ceasefire and access for humanitarian aid.

But with the Syrian opposition saying it cannot accept a truce in the current climate because it does not trust the Russians, diplomats saw little chance of progress at discussions in the German city of Munich.

A Western diplomat told Reuters that U.S. Secretary of State John Kerry wanted an immediate ceasefire in Syria — “All or nothing” — although the Russians have proposed a truce from the beginning of next month.

Russia’s intervention on the battlefield on behalf of President Bashar al-Assad has swung the momentum of the fighting, allowing government forces to push the rebels on to the back foot and underlining Moscow’s influence over the future of the five-year-old war.

The Syrian opposition and France have insisted that the United States should adopt a more committed approach to resolving the situation in Syria and put pressure on Russia to stop bombing rebel positions in support of the Syrian army.

As he met Kerry in Munich, Russian Foreign Minister Sergei Lavrov said Moscow had submitted proposals for implementing a ceasefire in Syria and was awaiting a reaction from international powers.

Kerry said he expected a “serious conversation” about all aspects of what was happening in Syria.

“Obviously, at some point in time, we want to make progress on the issues of humanitarian access and ceasefire,” Kerry said.

The Munich meeting follows efforts to involve all sides in peace talks in Geneva that failed after the Syrian government launched a major military offensive backed by Russian air power.

But with Russian warplanes intensifying their efforts and Assad’s forces closing in on the city of Aleppo, the Munich talks have become a defining moment as to whether the diplomatic process can continue in the short term.

But a senior Western diplomat was pessimistic about what might be achieved in Munich, saying: “This meeting risks being endless and I fear the results will be extremely small.”

At the same time, the United States was pressing allies to contribute more to the campaign against Islamic State that it says must be accelerated, regardless of the fate of diplomatic efforts to end Syria’s civil war.

As he prepared to meet allied defense ministers in Brussels, Defense Secretary Ash Carter said Islamic State would have to be defeated “whatever happens with the Syrian civil war”.

Further evidence of Russia’s influence on the fighting emerged on Thursday, when Kurdish fighters, backed by Russian air strikes, overran a military air base that had been in the hands of the rebels since 2013.

Rebel groups have been distracted by the offensive in the area by the Syrian army and its Russian allies, allowing the Kurds to capture the Menagh base near the Turkish border and expand their foothold in the north.

One rebel commander, Zekeriya Karsli from the Levant Front, said: “The fall of Menagh airport has made the situation on the ground pretty grim.”

The Russians are happy to help the Kurds in this instance as it means further problems for the Syrian rebels they are trying to destroy.

At the same time, a Syrian minister said Russian mediators were helping the government to broker deals with rebels who are seeking to lay down their weapons or to relocate to other insurgent strongholds.

National Reconciliation Minister Ali Haidar’s comments in an interview with Reuters reflect the dramatic shift in the Syrian war since Russia began air strikes in support of Assad on Sept. 30.

As the United States struggles to advance diplomacy toward securing a wider ceasefire, so-called local reconciliation agreements represe8nt the Syrian government’s preferred means of making peace on its terms from a position of strength, area by area.

“The truth is that since the presence of the Russians on Syrian land, they can play the role of mediator in some areas,” Haidar said at his offices in Damascus.

On the battlefield, Russian warplanes have been bombing around the northern city of Aleppo in support of the Syrian government offensive to recapture the city, sending tens of thousands of people fleeing to the Turkish border.

President Tayyip Erdogan said Turkey’s patience may run out over Syria. He called on the United Nations to prevent “ethnic cleansing” and warned Europe he could “open the gates” for refugees.

“There is a chance the new wave of refugees will reach 600,000 if air strikes continue,” Erdogan said in a speech in Ankara.

The United Nations and the European Union, which has agreed a 3-billion-euro fund to improve conditions for refugees in Turkey, have both urged Ankara to open the border.

“They struck Aleppo so we fled. First we escaped to another village. We’ve gone to every village. But they’re bombing everywhere so we came here,” said Musa Ibrahim Isa, one of the tens of thousands of people at Bab al Salama, on the Syrian side of the border.

“Our only wish from God is that these gates be opened.”