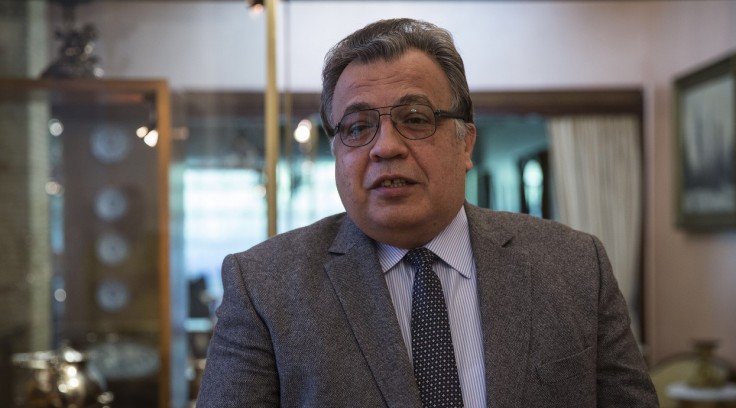 By Satuk Bugra Kutlugun — Russia’s Ambassador to Turkey Andrey Karlov, who was assassinated Monday, gave his final interview to Anadolu Agency.
The envoy assured Turkey of Russian cooperation “in every sense, at the bilateral or international level,” during the Nov. 30 sit-down.
Karlov was killed after being shot multiple times in Ankara as he delivered a speech at an opening ceremony of an art gallery when an armed assailant opened fire that targeted the envoy.
Below is a reproduction of that last interview.
Russia ‘not demanding’ Turkey quit EU for Shanghai pact
– Russia is ready to cooperate with Turkey in every sense,’ says Moscow’s ambassador to Ankara
Russia does not expect Turkey to cut its ties with the EU while conducting accession talks with the Shanghai Cooperation Organization (SCO), Russia’s ambassador to Ankara said Wednesday.
“It is all is up to Ankara,” Andrey Karlov said. “During the [SCO] membership process, we are not at all demanding from Turkey to refrain or halt its relations with the EU.”
In an interview with Anadolu Agency, Karlov assured Turkey of Russian cooperation “in every sense, at the bilateral or international level.”
President Recep Tayyip Erdogan had earlier indicated that Turkey was considering membership of trade blocs other than the EU, especially the SCO.
Karlov anticipated that a meeting between Foreign Minister Mevlut Cavusoglu and his Russian counterpart Sergey Lavrov in Turkey’s Antalya province on Thursday would be a symbol of a new phase in bilateral relations between the two countries.
“The latest issues in Ukraine and Syria will top the agenda,” he said. “This meeting will play a key role in cooperation.”
In addition, Prime Minister Binali Yildirim is due to visit Russia next week.
Karlov said Russia wants to see Turkey as a natural gas transit hub and supported the TurkStream natural gas project.
– Pipeline –
The signing of an intergovernmental agreement for the gas pipeline by Erdogan and Russian President Vladimir Putin last month ensured that work could start on the project, Karlov said.
TurkStream, announced by Putin during a December 2014 visit to Turkey, will carry gas from Russia under the Black Sea to Turkish Thrace. One line, with 15.75 billion cubic meters of capacity, is expected to supply the Turkish market, while a second line intends to carry gas to Europe.
“We expect the construction of the pipeline to start next year and the first gas to arrive in 2019,” Karlov said. He also underlined Moscow’s commitment to the Akkuyu nuclear power station in southern Turkey.
Karlov welcomed the passage of legislation to speed up the construction of the plant. He added: “The issue of workers who will be employed in the plant is also very important. Nearly 250 Turkish students are being educated in different Russian universities in the field of nuclear energy engineering.”
The agreement for the nuclear plant in Mersin province, which is to have 4,800 megawatts of capacity, was signed in 2010 and it should be operational by 2023.
Meanwhile, Foreign Ministry said Cavusoglu and Lavrov would to meet on the sidelines of the 5th Turkish-Russian Joint Strategic Planning Group.
According to a ministry statement, the two leaders will discuss regional and global issues, cooperation in the fight against terrorism and economic matters.
Relations between Russia and Turkey soured in November last year after the downing of a Russian warplane on the Syrian border but were resumed in June.

Previous Isis manufacturing military standard weapons on an ‘industrial scale’ in Iraq
Next Iranian FM, DM in Russia for Talks on Syria