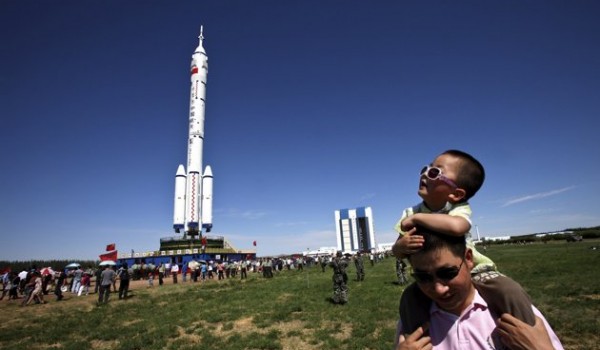 A Chinese manned spacecraft was launched into orbit with three astronauts on board as part of a 15-day mission to set up an experimental space lab. The launch is the latest step towards the development of a space station. Once in orbit, the Shenzhou 10 spacecraft will dock with the Tiangong (Heavenly Palace) 1, a trial space laboratory module, and astronauts — two men and one woman — will carry out experiments and test the module’s systems. China successfully carried out its first manned docking exercise with Tiangong 1 last June, a milestone in an effort to acquire the technological and logistical skills to run a full space station that can house people for long periods.

Other important events:
1895 - Charles A. Duryea is granted the first US patent for a gas-powered automobile.
1901 - New Zealand annexes the Cook Islands.
1903 - The unpopular King Alexander of Serbia and his wife are murdered in a palace coup.

1917 - Alexander I becomes King of Greece following his father Constantine I’s abdication.
1940 - Princess Juliana of The Netherlands arrives in Canada as an exile during Second World War.
1951 - Mozambique becomes an overseas province of Portugal.
1955 - 77 spectators are killed in car crash during Le Mans 24 hour race.
1963 - Greek Premier Constantine Caramanlis resigns in protest of King Paul’s state visit to Britain.
1967 - The UN brokers a ceasefire between Israel and Egypt, Syria and Jordan.
1969 - Soviet and Chinese troops clash on Sinkiang border.
1970 - Palestinian fighters and King Hussain’s army sign a truce in Jordan after a week of heavy clashes.
1981 - An earthquake in south-east Iran kills at least 1,500 people.
1989 - American teenager Michael Chang rewrites the record books and produces one of the biggest sporting upsets in years when he win the French Open title.
1990 - John Poindexter is sentenced to six months in prison for attempting to cover up the Iran-Contra scandal.
1992 - US President George H.W. Bush is forced to flee from gunfire and tear gas, disrupting his visit to Panama.
1995 - A bomb explodes at an outdoor music festival in Medellin, Colombia, spraying shrapnel that kills at least 28 people.
2004 - The US bids a final farewell to former US president Ronald Reagan in funeral rites.
2005 - G8 Ministers agree to write off $40 billion owed by 18 of the world’s poorest countries.
2010 - Kyryztan declares a state of emergency and implements curfews as ethnic clashes leave 37 dead and over 500 wounded.
2013 - A Chinese manned spacecraft with three astronauts on board embarks on a 15-day mission.
2016 - US Singer Christina Grimmie dies after being shot at a concert venue in Florida.
2017 - 11 die while more than 900 inmates escape in Congo jail attack.