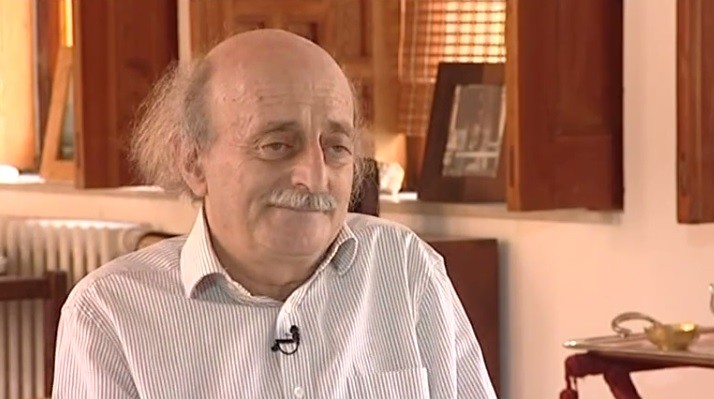 Jumblat says Syria, Iran conspiring against him in elections

Progressive Socialist Party leader Walid Jumblat has said that “the Syrian-Iranian axis and the Free Patriotic Movement” will be running in the parliamentary elections against “what’s left of an independent national decision in Mukhtara and in areas other than Mukhtara.”

“The entire Democratic Gathering is targeted and this is not Taymour Jumblat’s battle but rather the battle of the sovereign, independent national-Arab decision,” he added.

Commenting on the recent return of the Saudi and Kuwaiti ambassadors to Lebanon, Jumblat hoped the Gulf will seek “political and economic balance in Lebanon so that we do not remain a hostage and under the control of the Iranians and Syrians.”

As for Hizbullah, Jumblat said: “We haven’t given up the idea of disarming Hizbullah… but I won’t endorse the theory of some political parties, like Fares Soaid, that these weapons should be removed by force.”

“This is impossible and it would implicate us in a civil war that we’re better off without,” the PSP leader added.

Noting that there should be dialogue over weapons, Jumblat said “we must know that the existing weapons are Iranian weapons.”

“They are a party, group and regime who do not believe in dialogue, and we’ve seen this, from Rafik Hariri to Lokman Slim, but we must have a very calm approach and we must confront,” the PSP leader added.

As for his his good ties with Speaker Nabih Berri, Jumblat said: “We cannot forget that Berri is an essential and major representative of Shiites and that he does not always approve of Hizbullah’s policy, but remember the pressures that he is facing from Iran and Syria, and remember that he has not visited Syria since the beginning of the Syrian war.”

“When there are some decisions to be taken, he does not always agree with Hizbullah, but the confrontation against the Iranians and Syrians is not an easy thing,” the PSP leader went on to say.

“Hariri endorsed Franjieh and (Lebanese Forces chief Samir) Geagea reconciled with Aoun, which led to the election of the latter through votes,” the PSP leader pointed out.