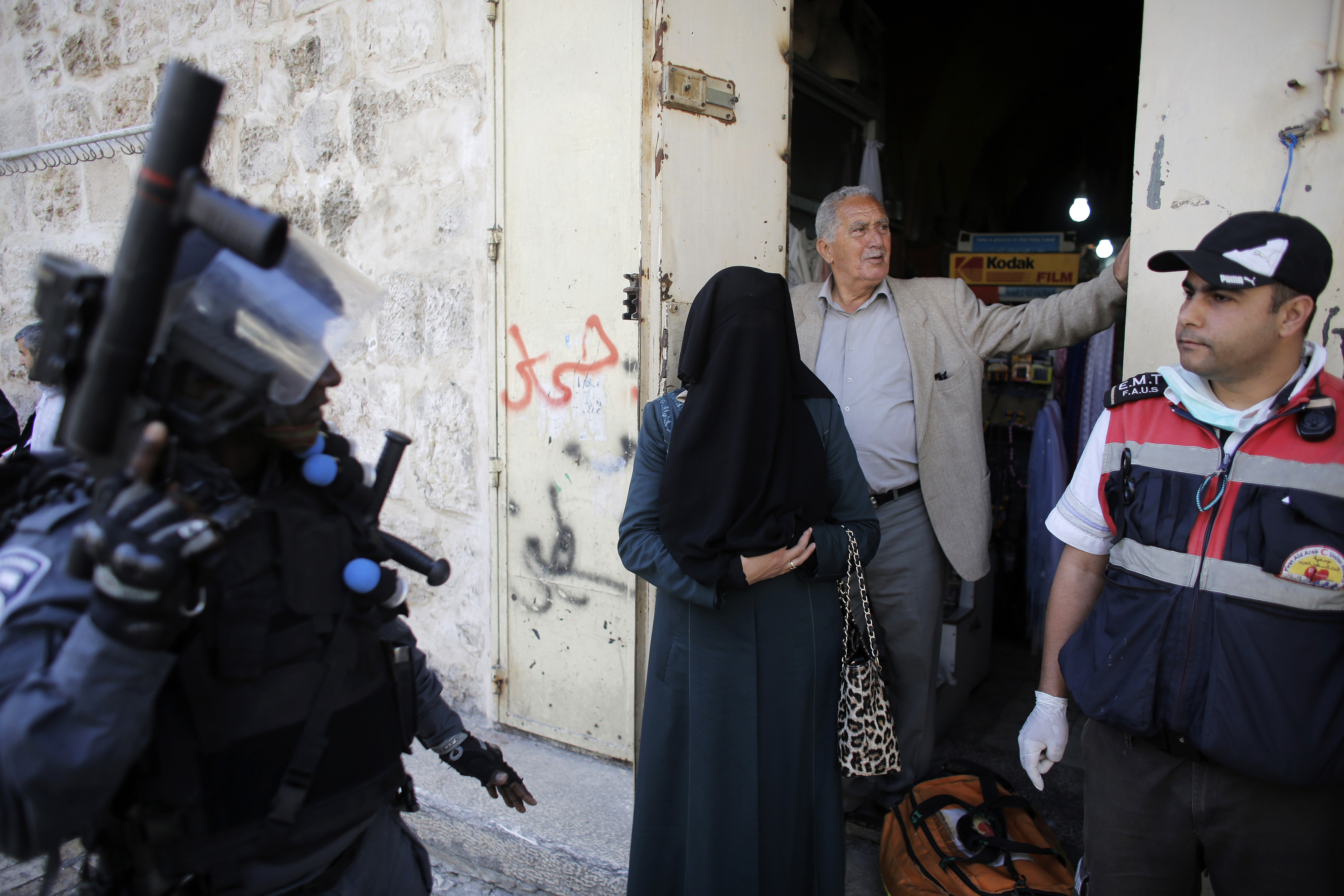 Image credits: A Palestinian woman stands next to an Israeli policeman (L) after police prevented people from entering the compound which houses al-Aqsa mosque and is known to Muslims as Noble Sanctuary and to Jews as Temple Mount, in Jerusalem's Old City April 16, 2014. Israeli riot police entered one of Jerusalem's most revered and politically sensitive religious compounds on Wednesday to disperse rock-throwing Palestinians opposed to any Jewish attempts to pray there. REUTERS/Ammar Awad (JERUSALEM - Tags: POLITICS CIVIL UNREST RELIGION) - RTR3LHIS

Jordanian officials have denounced the Israeli government’s decision to allow 230 radical Jews to break into Al-Aqsa Mosque on Sunday. The radicals were celebrating the Jewish festival of Purim and had called the day earlier to hold  “carnival”  festivities on this holiday, which is often celebrated with Jews wearing costumes and colorful outfits and masks. Others were filmed drunk and brandishing a wine bottle outside one of the mosque’s gates.

Daifallah Al-Fayez, a spokesman from the Jordanian Foreign Ministry, said that the Israeli police allowed hundreds of radicals to enter into Al-Aqsa Mosque without coordination with the Jordanian Waqf (endowment) officials.

The Jordanian spokesman called the Israeli action a “stark violation” of the historic and legal status quo as well as a violation of international law and commitments made by Israel.

Al-Fayez stressed that the Jerusalem Waqf department is the only legal party responsible for the management of the mosque, including deciding who can enter.

Al-Fayez said that Israel must respect the status quo and the authority of the Jerusalem-based waqf officials.

The Israeli action comes at a time when the country’s media has claimed that Israel’s Defense Minister General Benny Gantz held an unannounced meeting with the Jordanian monarch last Friday. Jordan has not commented on the issue and the Jordanian media has been relatively silent, except for some platforms republishing Israeli media reports.

Gantz, the leader of the Blue and White party, reportedly told his party members earlier that he was conducting secret meetings with top Jordanian officials. Gantz publicly criticized Israeli Prime Minister Benjamin Netanyahu for failing to improve relations with Jordan.

“I think our relationship with Jordan could be 1,000 times better. Unfortunately, Netanyahu is an unwanted figure in Jordan, and his presence harms the two countries’ relations,” Gantz said.

Jordan’s king has been unhappy with the way Israel is violating an understanding reached in Amman in 2014 in the presence of then-US Secretary of State John Kerry, Netanyahu and Jordan’s king, in which they had agreed that Al-Aqsa Mosque is for “Muslims to pray and for all others to visit.”