How Jihadists Slip Through Europe’s Dragnet and Into Syria

Along the southern frontier of the European Union, a small but growing number of aspiring jihadists are blazing trails by road and ferry to Syria’s battlefields, sidestepping heightened airport security and slipping through the holes in Europe’s intelligence dragnet.

Some fighters follow meandering bus routes through several countries en route to the more loosely guarded border of Bulgaria to Turkey. Others engage in what authorities call “broken travel,” using family visits or holiday destinations as an initial leg to mask their final destination.

That was how the wife of Paris terrorist Amedy Coulibaly slipped into Syria days before her husband killed four people at a kosher grocery last month. The woman, Hayat Boumeddiene, drove from France to Spain, then flew to Turkey before joining Islamic State in Syria. She later called for others to join her, in an interview with the militant group also known as ISIS or ISIL.

But the growing use of alternative routes magnifies a security challenge for EU policy makers: How to catch suspected militants without undermining the bloc’s commitment to free movement across a region where passport and customs checks at national borders have been effectively abolished.

U.S. intelligence agencies reported last week that despite greater Western efforts, foreign fighters are streaming into Syria and Iraq to join extremists. An estimated 20,000 foreign militants there include at least 3,400 Europeans. About 100 in Syria are believed to be from the U.S.

A series of high-level EU meetings in Brussels this month is seeking to revamp the EU’s counterterrorism strategy by bolstering information exchange. European officials say intelligence agencies have in recent months expanded the sharing of terror suspect names. On Thursday, EU leaders agreed to broaden use of the region’s law-enforcement databases—including passenger flight details—to block the exit of potential fighters.

Traditionally, European countries shied away from such regionwide intelligence sharing, largely because some countries are seen as having weaker law enforcement standards with the potential for leaks that could compromise ongoing operations and intelligence gathering.

Since the summer, Interpol and Europol have increased the number of names on their travel blacklists, but national intelligence agencies still continue to prefer working bilaterally, according to Alexander Evans, the head of the U.N.’s efforts to sanction al Qaeda and Islamic State.

Some nations also fear that sharing too much personal information about its citizens could violate privacy laws, said EU and United Nation diplomats.

Even as the EU tries to tighten security, would-be fighters target vulnerable exits. Databases shared among EU members and its allies work well at busy border crossings—Istanbul airport, for example—compared with places that have less technological infrastructure, European officials said. Weak points include Turkey’s 170-mile border with Bulgaria and the daily ferries that shuttle between Turkish-occupied northern Cyprus and mainland Turkey, they said. 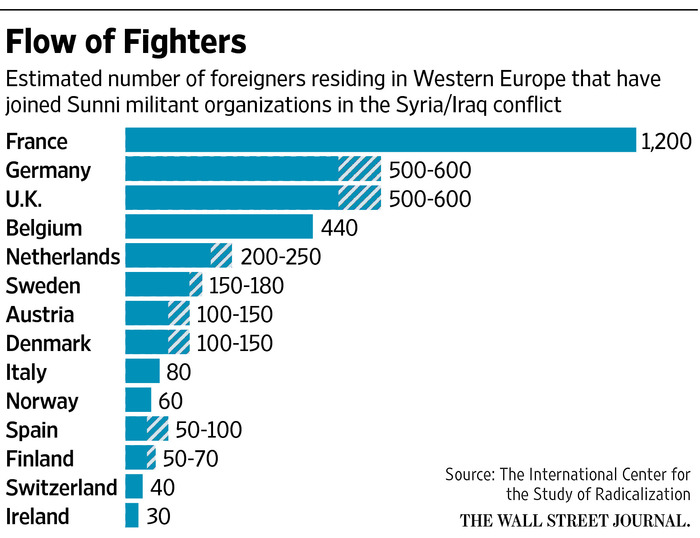 In the weeks since terror attacks in Paris and Copenhagen left 18 dead, Bulgaria has approved expansion of its border fence with Turkey and agreed to deploy military personnel on the Turkish border. The U.S. military last year began training Bulgarian border police.

“We are doing as much as any EU nation to boost security, but with the added surveillance of arrivals at Istanbul airport, more people are coming to Bulgaria,” a senior Bulgarian official said. The official added that determined people could still cross some areas of the Bulgaria-Turkey border, especially at night, which was one reason for expanding the fence. 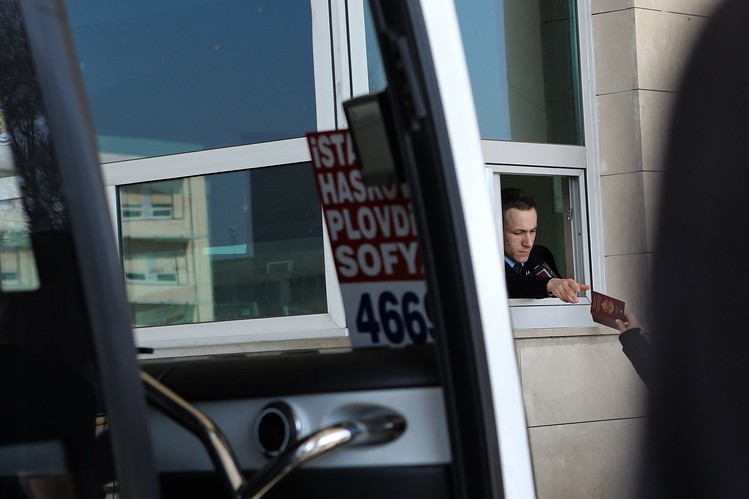 ENLARGE
A bus en route from Sofia to Istanbul goes through passport control on the Turkish side of the border at Kapikule. PHOTO: DANIELLA ZALCMAN FOR THE WALL STREET JOURNAL

Bulgarian authorities in January arrested Fritz-Joly Joachin, a self-confessed associate of the Charlie Hebdo attackers. Mr. Joachin, a convert to Islam of Haitian origin, was traveling on a bus near the border with Turkey, officials said. The warrant for his arrest was based on allegations by his wife that he had tried to kidnap their 3-year-old son.

Mr. Joachin was with three men who, officials said, continued traveling toward Syria. One of the men, Cheikou Diakhaby, had spent seven years in an Iraqi prison after his arrest in 2004 for fighting U.S. forces.

Six days later, after the Paris attacks, France issued a second warrant alleging Mr. Joachin belonged to a terrorist organization, prompting Bulgarian authorities to extradite him to Paris. He has denied the charge.

Police in Turkey later arrested Mr. Joachin’s traveling companions and extradited them to France. “The Bulgarians missed these people, and they shouldn’t have,” a senior Turkish foreign ministry official said. “It’s not the first time this has happened, and it’s a problem.”

In June, Imran Khawaja, a 27-year old Briton who spent six months fighting in Syria, crossed into Bulgaria from Turkey and was met by his brother. The men drove through Europe. Mr. Khawaja was put on a U.K. blacklist after posing for a photograph with a severed head in Syria.

Mr. Khawaja, who faked his own battlefield death on social media, was arrested trying to sneak into the U.K. He was sentenced last month to 12 years in prison.

“What happens the day after ISIL is finished?” asked one Cypriot security official, referring to Islamic State. “We have to be vigilant not just for Europeans trying to travel to Syria, but trying to come back.”

In Cyprus—a far less-traveled route for militants—authorities have beefed up checkpoints at the U.N. divide between the Cypriot Republic and the breakaway Turkish-occupied north. New screening equipment has been installed and names of European travelers are now run through security databases.

Officials in Nicosia are pushing for more data sharing but say it will be nearly impossible to stop every jihadist among the 2 million annual tourists.

“The major problem is the lone wolves,” said Elena Rafti, the chief security policy director for Cyprus’ Ministry of Foreign Affairs, speaking of individuals who take on militant beliefs on their own, with no connection to known groups.

A senior Cypriot security official said about a dozen known Western militants have flown into Larnaca and crossed into northern Cyprus. European intelligence agencies suspect more have used that route.

Northern Cyprus’ officials say they aren’t to blame. “The massacre in Paris is something that should force people to think rationally, not emotionally,” Erhan Ercin, Undersecretary of Northern Cyprus’ Foreign Ministry, said in an interview. “We are willing to cooperate with those who are willing to cooperate with us…if they have a blacklist, share it.”

Last summer, a Scandinavian man on a blacklist, disappeared after booking what appeared to be a vacation in Cyprus, a Western diplomat said.

After landing at the Larnaca airport, the suspected jihadist went to the island’s Turkish-occupied north and boarded a ferry to Turkey. Once there, he hopped on a bus and headed to the Syrian border to join Islamic State.

“This was a really bad guy,” the diplomat said, “someone we were watching.”

Write to Maria Abi-Habib at maria.habib@wsj.com and Joe Parkinson atjoe.parkinson@wsj.com

Tags:
How Jihadists Slip Through Europe’s Dragnet and Into Syria