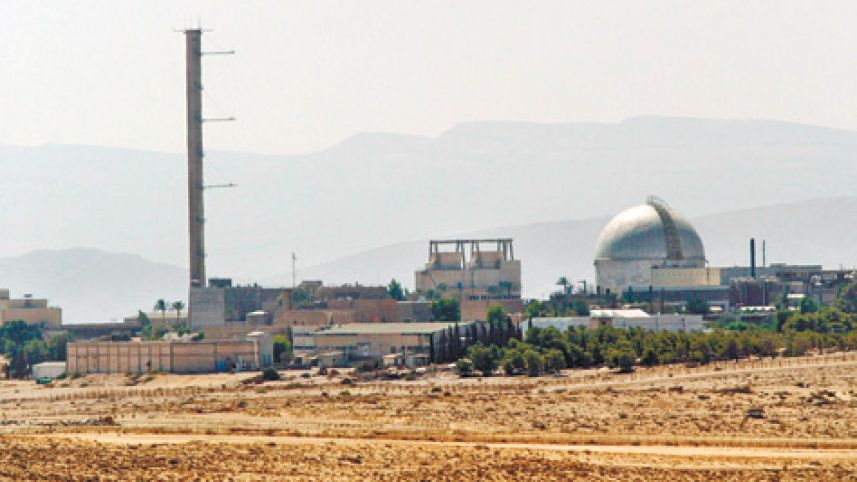 The nuclear reactor near Dimona.AFP

The Levant News — An innovative ultrasound examination has shown signs of 1,537 defects at the aging aluminum core of the Dimona nuclear reactor, according to study findings released at a scientific forum held in Tel Aviv this month.
Fears for the condition of the reactor were palpable at the conference.
Israel received its nuclear reactor from France at the end of the 1950s and it was put into operation for the first time at the end of 1963. Such reactors are intended to be operational for about 40 years, to ensure they remain in one piece.

The main problem with aging reactors is that the core is irreplaceable. The core, which houses the fuel rods where nuclear fission takes place, absorbs a great deal of heat and radiation. These damage it over the years, raising many questions as to its ability to continue to operate.
Israel is not a signatory to the Treaty on the Non-Proliferation of Nuclear Weapons, and is therefore not subject to the monitoring regime of the International Atomic Energy Agency. It has, however, voluntarily accepted to operate in accordance with the IAEA’s safety regulations.
The main safety monitor of the reactor is an independent commission directly subordinate to the prime minister. The commission revoked the operating license of a reactor for safety issues only once.

According to a telegram by the U.S. Embassy revealed as part of the U.S. State Department leaks, it turns out that in 2007 Prof. Eli Abramov, then deputy director general of the reactor, briefed senior Americans and told them the reactor’s systems, including its cooling towers, were being changed.
The main problem according to Abramov was the irreplaceable core, which is permanently monitored by a variety of means to ensure it is durable.
One of the innovative methods developed to monitor the reactor’s condition, the ultrasound waves, was revealed at the conference. A rod twisted into the reactor that has a number of ultrasound sensors manages to reveal defects, cracks and various distortions inside the aluminum core.
Each defect is numbered and checked and examined on a regular basis. The scientists who wrote the study said that these defects do not point to any problem with the reactor and that the reason for the examinations is due to a “strict approach.”
But the research and effort invested in the core show that there are fears about its condition of the core. Even if it’s fine for now, in the long run Israel has no solution for the issue. For political, scientific and economic reasons, Israel has no capability or desire to replace the core, an operation that would mean building a new reactor. Therefore, alongside innovative and strict examinations, the reactor is not operated as often as in the past and requires safety checks each time as well as various permits.
Most research presented at the conference by reactor scientists dealt with its safety, rather than its operations. The research presented dealt with the topics of employee protection, reinforcing the core to face an earthquake and defending cores against any missile threat.