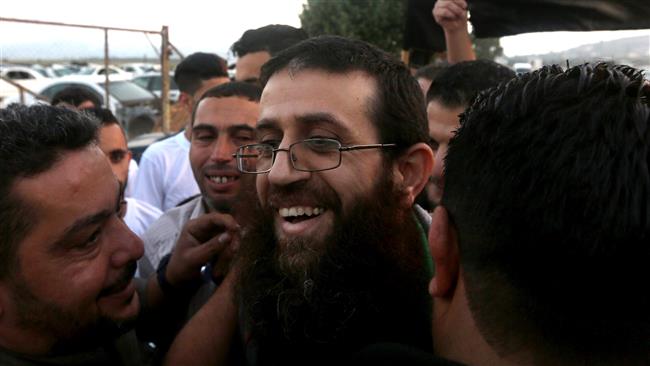 Palestinian hunger striker Khader Adnan (C) is being greeted by friends and relatives in the West Bank town of Arraba after his release on July 12, 2015. ©AFP

THE LEVANT NEWS — Israeli military forces have detained a former Palestinian prisoner, who went on a lengthy hunger strike last year in protest against his detention.

Witnesses said an Israeli military vehicle stopped Khader Adnan’s car on Monday afternoon as he was driving near the town of Silwad northeast of the occupied West Bank city of Ramallah.

Israeli soldiers then took the 37-year-old man to an unknown location, they said.

Tel Aviv released Adnan from jail on July 12, 2015, following a deal in which he agreed to end his 56-day hunger strike.

In 2012, Adnan, a father of six from the West Bank city of Jenin, staged another 66-day-long hunger strike before being released the same year. However, he was re-arrested in 2014.

In a separate development on Monday, Israeli forces destroyed the houses of two Palestinians, who were allegedly involved in two fatal attacks on settlers in East al-Quds (Jerusalem) last October.

Israeli military filled the home of Alaa Abu Jamal with concrete and sealed it off in the neighborhood of Jabel Mukaber. The forces also used jackhammers to destroy the walls of Bahaa Allyan’s home.

Tensions have been running high in the West Bank after Israel’s imposition in August of restrictions on the entry of Palestinian worshipers into the al-Aqsa Mosque compound in East al-Quds (Jerusalem). Al-Aqsa Mosque is the third holiest site in Islam.

The restrictions have enraged Palestinians, who are also angry at increasing violence by Israeli settlers frequently storming the al-Aqsa Mosque. They say the Tel Aviv regime seeks to change the status quo of the compound.

At least 145 Palestinians, including children and women, have lost their lives at the hands of Israeli forces since the beginning of last October.