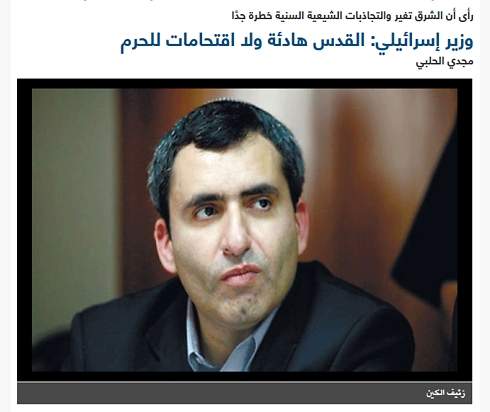 THE LEVANT NEWS — Israeli Minister Ze’ev Elkin talks with Saudi Arabian news website “Elaph” about the shared threat from Iran. When asked whether there would be negotiations between Israel and Arab countries, he replied: ‘Those countries will decide if they want relations.’

An Israeli minister gave a rare interview to a Saudi Arabian media outlet recently, in the wake of the shared threat the two countries face following the implementation of the Iran nuclear deal.

After Foreign Ministry Director Dore Gold’s interview with a Saudi website on Israel’s foiling of a weapons transfer to Hezbollah, and following MK Michael Oren’s interview with the same website, now Minister of Absorption Ze’ev Elkin has been featured on Saudi site “Elaph” for the first time.

Saudi Arabia, as most Arab countries, does not have diplomatic ties with Israel. The website presented Elkin as the Minister for Absorption, the Minister of Jerusalem Affairs, and a member of the cabinet.

The site also wrote that he is a senior member of the Likud party and is thought of as a close associate of Benjamin Netanyahu, as well as being close to Russian President Vladimir Putin.

The interview took place in Elkin’s office in Jerusalem. He was asked about possible cooperation between Israel and Arab states, and replied: “I’m a very realistic person, and in the current situation the ground is ready for cooperation around share interests.

“Nonetheless, dialogue around a joint alliance is still a long way off,” Elkin continued. “We will respect any alliance that is based on partnership and recognition of Israel as a nation-state.”

Elkin did not respond directly to the question of whether negotiations between Israel and Arab states were in the pipeline, only saying: “It’s up to those countries whether they want relations with us to be public or hidden.”

The ongoing tensions between Saudi Arabia and Iran also hung over the interview. Elkin claimed that “the Middle East will not go back to how it was, especially in the wake of Iran’s attempts to wrest control over it.

“At the same time, there is also rising Islamic extremism as can be seen with Islamic State. It’s deepening the rift between Sunnis and Shi’ites and just proves that Israel is not the root of the divisions in the Middle East.”

Elkin also had a message for Saudi readers, saying that the situation in Jerusalem was relatively calm. “The wave of incitement that intensified last year in Jerusalem has finished and moved into the Judea and Samaria areas.

“Whoever visits the Temple Mount will not feel that there is anything wrong. The accusations that Israel is changing the status quo in Jerusalem are incorrect,” Elkin continued.

“The situation on the Temple Mount has not changed, and the incitement against Israel is mistaken. I call on everyone to visit the site and see the proof.”

Previous Syrian opposition arrives in Geneva for peace talks
Next Jumblatt to Nasrallah: Criticizing Iran comes within the framework of freedom of expression