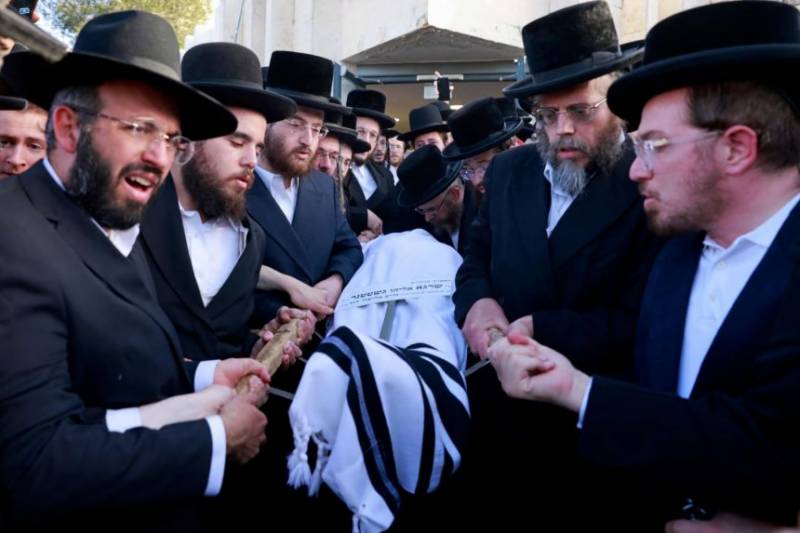 A leading Israeli journalist has launched a scathing attack on the Tel Aviv government for the manner in which police and soldiers brutalized civilians and journalists at the Al-Aqsa Mosque compound in the Haram Al-Sharif over the past week, and called for a probe into their actions.

Nir Hasson, who covers Jerusalem and the Palestinian community for the liberal English-language publication Haaretz, also said that he believes the violence would not lead to another Intifada.

The manner in which the conflict has been handled also reflected a change in the policies of the current government of Naftali Bennett from those of former Prime Minister Benjamin Netanyahu, he said.

Hasson, appearing on The Ray Hanania Radio Show on the US Arab Radio Network and sponsored by Arab News, said the violence began when a group of religious Israelis entered the Temple Mount “with political agendas” but did not reach the levels of violence seen in past years.

Hasson acknowledged that in many instances police overstepped their bounds by beating civilians and journalists, and mishandling their response to the protests.0 seconds of 1 minute, 17 secondsadVolume 90%

“Last year they did everything wrong. They did a collective punishment to all Palestinians in East Jerusalem day after day,” Hasson said.

“This year, they (police) tried to divide between the majority of the Palestinians who came to the Temple Mount or to Damascus Gate to pray or to celebrate the end of the Feast of Ramadan, and the minority who came to clash and throw stones (at) the police.

“However ... we saw again and again very hard videos of police using clubs hitting people, hitting journalists, women, hitting a man who (stood with) his son.

“It’s terrible. I cannot be more (critical) of the Jerusalem police about it. I think they have to give more answers and they have to open investigations against those officers, not only because it makes no sense to treat … civilians (this way), but also because it puts oil on the fire, on the flames.”

Hasson said some violence was expected during the confluence of the three religious celebrations, but it did not reach the level that it has in the past as it did when former Israeli General and Prime Minister Ariel Sharon led a battalion of soldiers and police to the Haram Al-Sharif provoking the first Intifada in September 2000.

“It’s not the first time we have seen those clashes and violence rising in Jerusalem. And we know for at least the last five or six years now that every Ramadan there is a lot of tensions, especially focusing on the Temple Mount and Al-Aqsa compound,” Hasson said.

Hasson said that part of the difference between last year’s violence which saw more fatalities and injuries and spread throughout the West Bank, Gaza and in Israel, was the result of politics when Netanyahu wanted to use the violence to bolster his re-election hopes.

Netanyahu lost the Israeli elections to Naftali Bennett who Hasson said has not exploited the tensions for political benefit.ad0 seconds of 1 minute, 32 secondsVolume 90%

“Netanyahu especially last year. If you remember last year, it was still the government, but it was after the election and Netanyahu needed to head a new coalition. And the common political understanding in Israel was Netanyahu had an interest to (intensify) the flame(s) and have like some more violence because it would help him to raise the numbers of the Knesset and to build his coalition.

“Now, I don’t know if Netanyahu really made anything not carefully enough, intentionally. But we saw the police acting brutally without (any) sense. If you remember they blocked the stairs in Damascus Gate not allowing people sitting there without (any) reason. It made no sense, but it made only violence there.”

“Part of the answer is of course, is the government of Naftali Bennett who have vital interests to keep things quiet as possible because whenever there is any violence, any terror attacks they got hit very strong from the rightwing and from the Likud and Netanyahu. They’re saying you cannot trust him (Bennett) they cannot keep Israel safe.”

Hasson said that there are some extremists on both sides who want the conflicts and will exploit any event or time to fuel clashes.ad

“There (are) some groups, political, religious, mostly NGOs, who are trying to push the Israeli government to change the status quo but they are not the mainstream and they are not in the government and all the security institutions in Israel, the IDF, the police, the Shin Bit, all of them agreed that Israel should be very careful doing any steps in the Temple Mount, Al-Aqsa,” Hasson said.

“Things are pretty much quiet. But we had today a flag march of the rightwings, the radical rightwings in Israel, and a member of the Knesset, Itamar Ben Gvir from the radical rightwing party and they wanted to protest against the violence of the Palestinians and they asked the police to march from West Jerusalem to East Jerusalem and to go through the Muslim Quarter of the Old City of Jerusalem and the police would not let them and they blocked them all the way,” Hasson said.

“It also raised the tension and violence in Jerusalem today. There were a few hours of some kinds of clashes between those protestors, those rightwing activists and the police in the middle of Jerusalem. They didn’t let them go into East Jerusalem. But for now, this evening seems to be very quiet.”

Hasson said that the last 10 days of Ramadan the Haram Al-Sharif should be closed for non-Muslims and tensions “should be lower.”

In the meantime, US Secretary of State Anthony Blinken urged both Palestinian President Mahmoud Abbas and Foreign Minister and Alternate Prime Minister Yair Lapid in separate telephone calls to refrain from “any actions and rhetoric that escalates tensions.”https://e7e6a921c50ed0594defdb980ef6d9e6.safeframe.googlesyndication.com/safeframe/1-0-38/html/container.htmlAds by optAd360

The Ray Hanania Radio Show, hosted by the US Arab Radio Network and sponsored by Arab News, is broadcast each week live on Wednesdays in Detroit, Washington D.C., Ontario and rebroadcast on Thursday in Chicago at 12 noon on WNWI AM 1080 radio.