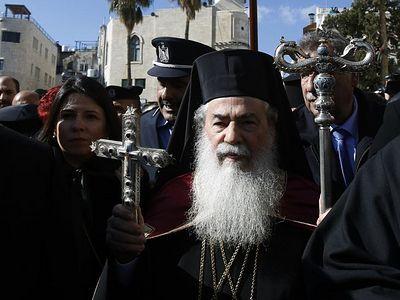 The Ateret Cohanim organization, which seeks to "Judaize" Israeli-annexed east Jerusalem, bought three buildings from the church in a controversial deal struck in secret in 2004.

The church brought charges against Ateret Cohanim, claiming the properties were acquired illegally and without its permission.

"We are deeply concerned about the situation regarding the Christian presence in Jerusalem," Russian foreign ministry spokeswoman Maria Zakharova said in a statement, a week after Israel's Supreme Court dismissed the church's appeal.

"Such a decision is predictably detrimental to interfaith peace and raises legitimate concerns about the position of the Christian community in the Holy Land," she added.

Tensions between Russia and Israel have heightened since the start of Moscow's military intervention in Ukraine, with Moscow accusing Israel of supporting the "neo-Nazi regime" in Kyiv.

In April, Russia asked Israel to hand over ownership of the contested Alexander Nevsky Church in Jerusalem after the transfer -- approved by the previous Israeli government -- was halted.

The Greek Orthodox Church is the largest and wealthiest church in Jerusalem with extensive land holdings there dating back centuries.

It has faced repeated accusations of corruption and facilitating Israeli settlement expansion on its properties.

Israel captured east Jerusalem in the 1967 Six Day War and later annexed it, in a move not recognized by most of the international community.