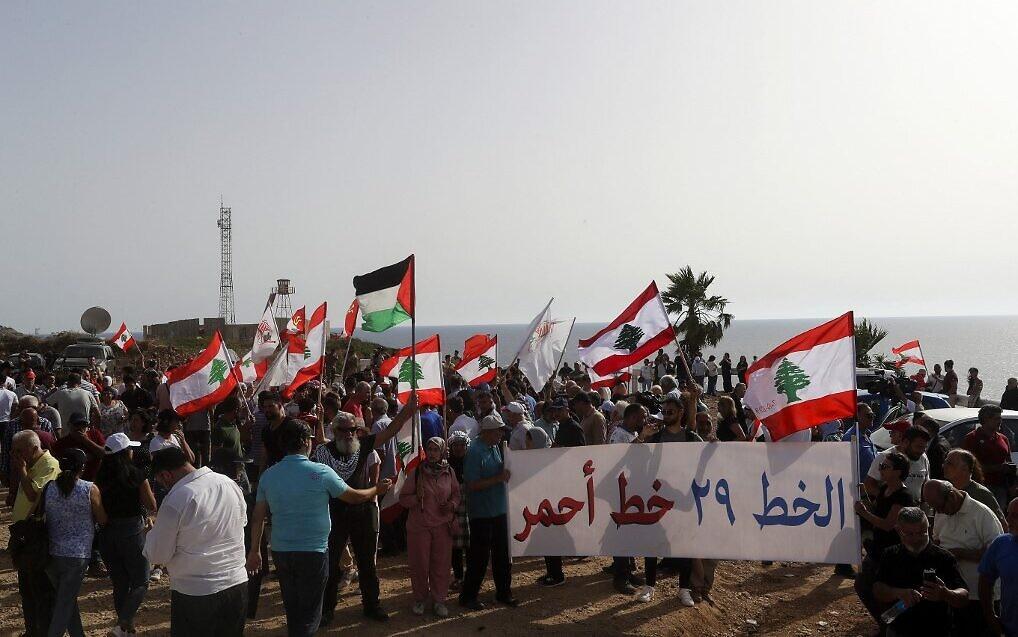 Image credits: Lebanese protesters take part in a demonstration at the Lebanese southernmost border area of Naqura, on June 11, 2022, days after Israel moved a gas production vessel into an offshore field, a part of which is claimed by Lebanon. - Israel urged Lebanon to speed up negotiations on its disputed maritime border ahead of an expected visit to Beirut by the US mediator in the contentious talks. (Photo by MAHMOUD ZAYYAT / AFP)

A conservative non-profit think tank has filed a petition to the Israeli High Court of Justice after the government said it would not submit a maritime border deal with Lebanon to a public vote.

The Times of Israel, an English-language online newspaper, said that "the Kohelet Policy Forum has filed the petition to prevent the cabinet from unilaterally approving an accord, claiming that the government would be in violation of Israel’s Basic Laws — which have special constitutional status — if it did not submit the question of ceding maritime territory to Lebanon as part of an agreement to a public vote."

"This is a dramatic decision from every perspective — security, economic, and policy. It is very problematic that the (caretaker) government without a Knesset would accept it in a period such as this contrary to the Basic Law: Referendum," Kohelet posted in a tweet.

In June, Israel moved a production vessel into a disputed gas field, parts of which are claimed by Lebanon. The move forced the Lebanese government to call for the resumption of U.S.-mediated negotiations, and U.S. mediator Amos Hochstein answered the request and visited Beirut, while Hezbollah threatened Israel against proceeding with extraction.

Lebanon is now waiting for a response from Israel after having relayed its maritime border position to Hochstein.