The Syrian Human Rights Organisation says the Israeli missiles were aimed at a shipment of weapons destined for Hezbollah.

Alleged footage on social media of the strike seems to show the missiles striking a target, but local reports say nothing was hit.

In response to the attack, the Syrian Air Defence attempted to down the Israeli missiles over eastern Damascus.

There is no confirmation about whether they were intercepted.

The local National Defence Forces (NDF) in the Al-Quneitra Governorate reported at least one powerful explosion occurred above the northern part of the province.

Some reports claim the explosion was a result of a Syrian air defence missile hitting an Israeli drone above the northern part of Al-Quneitra.

There are currently no reports of casualties. 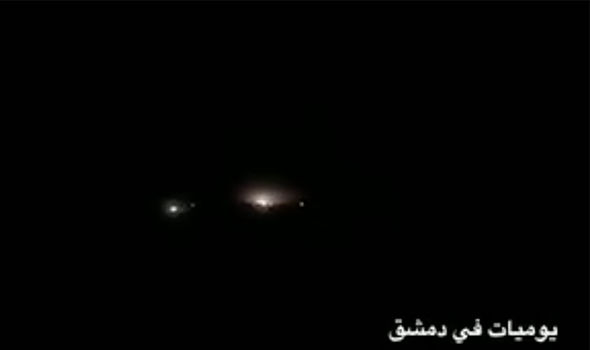 But a senior US official later told CNN the strike was carried out by Israel.

On Sunday a Patriot aerial-defence system missile was launched towards an unmanned aerial vehicle approaching the Israeli border from Syria.

Last month there was an airstrike south of the capital and Syrian media said Israeli planes fire missiles at Iranian targets near Damascus.

And in April a military base belonging to the Assad regime near the Syrian city of Homs was hit with missiles.

Both the Russia army as well as Syrian media claimed two Israeli planes carried out the attack.

Israeli said the strikes were a “retaliatory” measure amid reports of an alleged Iranian military buildup in Syria.