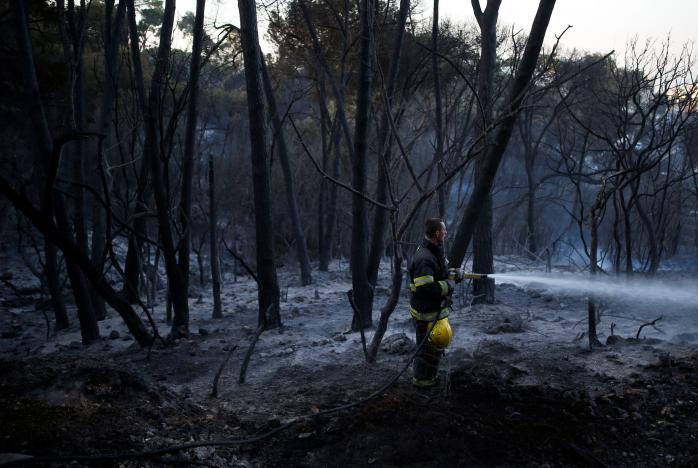 Image credits: A firefighter works as a wildfire burns in residential area of the northern city of Haifa, Israel November 25, 2016. REUTERS/Amir Cohen

Israel arrests 13 on suspicion of arson over mass wildfires

By Maayan Lubell for Reuters | Israeli police arrested 13 people on Friday on suspicion of arson, authorities said, after massive wildfires tore through central and northern Israel, a conflagration that Prime Minister Benjamin Netanyahu branded as "terrorism".

Firefighters kept battling the flames in wooded hills around Jerusalem and in northern areas on Friday, with support from Palestinian firemen and emergency teams from Greece, Cyprus, Croatia, Italy, Russia and Turkey.

Netanyahu said he had also accepted offers of help from Egypt and Jordan.

Unseasonably dry weather and easterly winds helped kindle the fires, which erupted on Tuesday and now stretch across half the country.

Arson appeared to be behind some of the blazes, Netanyahu said. "A price will be paid for this arson-terrorism," he told reporters on Friday. He said the arson was carried out by "elements with great hostility toward Israel."

"We cannot tell yet if this is organized, but we can see a number of cells operating," Netanyahu said.

Police spokesman Micky Rosenfeld said a dozen people had been detained either while attempting to set fires or fleeing the area, but he provided no further details. Internal Security Minister Gilad Erdan told reporters 13 people were arrested.

Erdan said those arrested were "minorities", an allusion to either Arab Israeli citizens or Palestinians. "The highest likelihood is that the motive is nationalistic," Erdan told Army Radio. Police, however, stopped short of declaring any motive.

The fires are the biggest in the country since 2010, when 44 people were killed in a killed in a massive blaze in the north. Investigators concluded that fire was caused by negligence.

Education Minister Naftali Bennett, leader of a far-right party, said on Thursday the fires could not have been started by Jews and on Friday blamed them on "nationalist terrorists", a reference in Israel to Palestinians.

"There is no coincidental 'wave of fires'," he wrote on Twitter. "There is a nationalist terrorist wave by fire terrorists meant to murder civilians and cause fright."

There has been no official response from Palestinian leaders. But Ayman Odeh, a leading Israeli Arab politician from Haifa, rejected the suggestion Arabs were responsible for arson attacks and accused the Israeli government of taking advantage of the situation to incite against the Arab minority.

Nearly a third of the residents of Haifa, a coastal city of around 250,000 people, including a large Arab population, spent the night in shelters and nearby towns and villages after being ordered to leave on Thursday in the face of walls of flame.

Smoke billowed over the city on Friday morning as firefighters worked to douse the remaining fires. City officials said the situation was under control but that at least 700 homes had been badly damaged or destroyed.

About 80,000 evacuees from Haifa were allowed to return to their homes on Friday as firefighters curbed the flames.

Israel's chief of police said on Thursday people may have decided to start fires after seeing the trouble they were causing. "We're in an area where if someone sees on the news there is an opportunity, he can take advantage of the opportunity," said Roni Alsheich.

An Israeli army spokeswoman said forces had arrested a Palestinian man caught trying to set a fire near the Israeli settlement of Kochav Yaakov in the occupied West Bank. Footage aired on Israeli television showed three people setting a fire in an open area near the West Bank settlement of Ariel.

Police said one man from the Bedouin village of Rahat in southern Israel had been arrested for incitement after he posted a message on his Facebook page calling on others to start fires.

Palestinians seek an independent state in territories including the West Bank that Israel took in a 1967 war. The last round of peace talks collapsed in 2014.