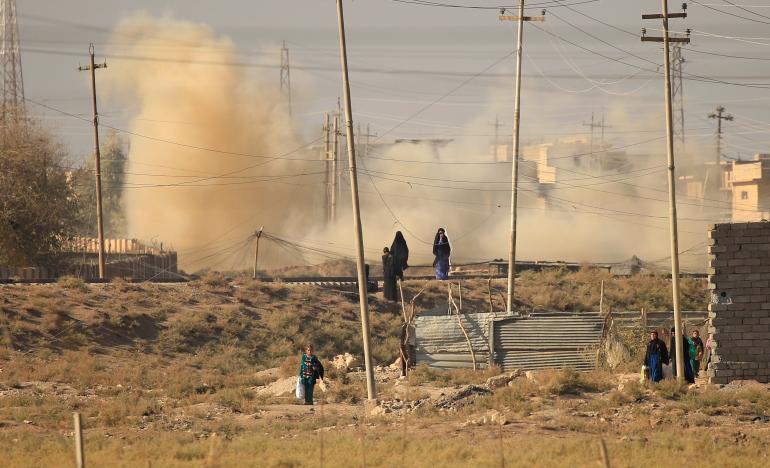 ISIS hits back in Mosul but faces new Raqqa front

By Ahmed Rasheed and Rodi Said | BAGHDAD/AIN ISSA, SYRIA – Reuters —ISIS fighters targeted Iraqi troops with car bombs and ambushes in Mosul, stalling an army advance in their north Iraq stronghold, but faced attack on a new front on Sunday when U.S.-backed rebels launched a campaign for the Syrian city of Raqqa.

The jihadists have lost control of seven eastern districts of Mosul to Iraqi special forces who broke through their lines last Monday. Officials say the militants are now sheltering among civilians in those neighborhoods and targeting soldiers in what one called the world’s “toughest urban warfare”.

Mosul, the largest ISIS-controlled city in either Iraq or Syria, has been held by the jihadist fighters since they drove the army out of northern Iraq in June 2014.

The three-week Mosul campaign has brought together a force of around 100,000 soldiers, security forces, Shi’ite militias and Kurdish fighters, backed by a U.S.-led coalition, to crush the Sunni jihadists.

Across the border, U.S.-backed Syrian fighters announced on Sunday the start of their own campaign, called Euphrates Anger, to recapture ISIS’ Syrian bastion of Raqqa.

The Syria Democratic Forces (SDF) is an alliance of Kurdish and Arab armed groups which has seized large swathes of territory along the Syria-Turkey border from Islamic State and pushed to within 30 km (20 miles) of Raqqa.

But the prominence within SDF ranks of the Kurdish People’s Protection Units, or YPG, has raised questions over its suitability as a force to capture the predominantly Arab city.

Turkey, which has battled Kurdish separatists for three decades, regards the YPG as anathema and Western officials have said the Raqqa operation should be fought mainly by Arab forces.

Washington says the battle for Raqqa will “overlap” with the assault on Mosul, in part because of concerns that any delay would allow Islamic State to use it as a base to launch attacks on targets abroad.

Twin offensives on Raqqa and Mosul could bring to an end the self-styled caliphate declared by Islamic State leader Abu Bakr al-Baghdadi from the pulpit of a Mosul mosque in 2014. 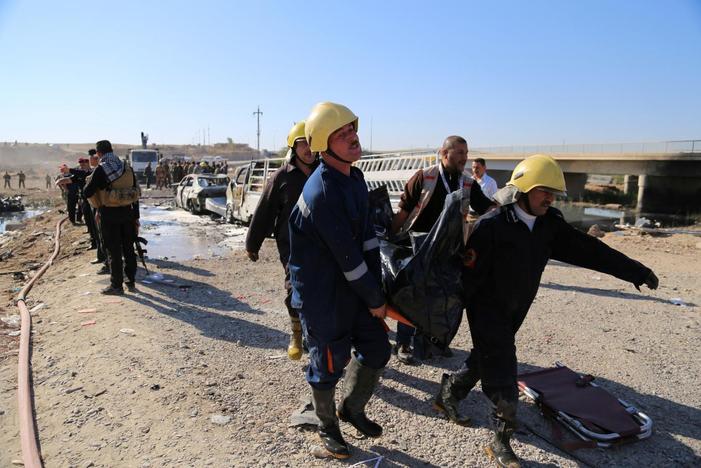 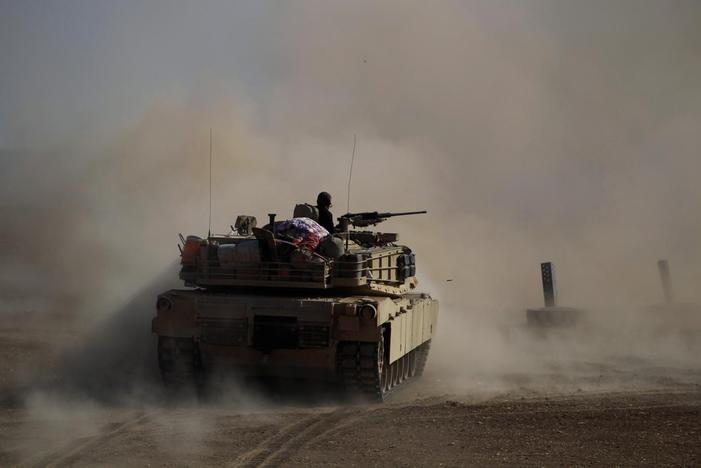 Dust is seen after an Iraqi soldier fired from a tank during fighting with Islamic State fighters, in the Shahrazad disrict of eastern Mosul, Iraq, November 6, 2016. REUTERS/Zohra Bensemra

Baghdadi, however, has told his followers there can be no retreat in a “total war” with their enemies, and the militants in Mosul have been waging a fierce and brutal defense.

They have deployed waves of suicide car bombs, as well as mortar attacks, roadside bombs and sniper fire against the advancing troops, and officers say they have also left behind fighters among residents of districts taken over by the army.

“That’s why we are carrying out the toughest urban warfare that any force in the world could undertake,” said Sabah al-Numani, spokesman for Iraq’s elite Counter Terrorism Service (CTS).

“Sometimes they climb to the rooftops of houses where civilians are still living and they hold them hostage and open fire on our forces, because they know we will not use air strikes against targets that have civilians.”

Major General Maan al-Sadi, a CTS commander, told state television Islamic State fighters had launched more than 100 car bombs against his forces in the east, which is just one of several fronts in the Mosul offensive.

It could resort to even more devastating weapons including a network of booby traps that can blow up whole neighborhoods, Masrour Barzani, head of the Kurdistan Regional Government’s Security Council, told Reuters.

Late on Friday, a CTS unit came under attack from the rear after advancing into east Mosul, said a colonel in the Ninth Armoured Division which is also taking part in operations there.

Islamic State militants emerged from houses behind them and isolated the convoy, preventing reinforcements from reaching them. Surrounded and low on ammunition, they had to shelter in houses before they finally got out on Saturday.

The Islamic State news agency Amaq released footage on Sunday of captured or destroyed military vehicles, including the burnt wreckage of a Humvee it said was taken in the eastern district of Aden. Fighters shouted “Allahu Akbar (God is Greatest)” and unloaded ammunition and communications equipment.

Amaq also said Islamic State was behind two bomb attacks on Sunday in Tikrit and Samarra, cities to the south of Mosul, which killed 21 people. Officials said the attacks, carried out by suicide bombers driving ambulances packed with explosives, targeted a checkpoint and a car park for Shi’ite pilgrims.

While the army and special forces have been pushing into Mosul from the east, Kurdish peshmerga fighters are holding territory to the northeast, and mainly Shi’ite militias have sought to seal off the desert routes to Syria to the west.

Security forces have also advanced from the south, entering the last town before Mosul on Saturday and reaching within 4 km (2.5 miles) of Mosul airport on the city’s southwest edge, a senior commander said.

The United Nations has warned of a possible exodus of hundreds of thousands of refugees from a city which is still home to up to 1.5 million people. So far 34,000 have been displaced, the International Organization for Migration said.

Many of those still in Mosul feel trapped, including those in districts which the army says it has entered.

“We still can’t go out of our houses…. mortars are falling continuously on the quarter,” a resident of the Quds neighborhood on the eastern edge of the city told Reuters by telephone.

Although there was no fighting in his own district, for the first time in five days, he said he could hear clashes in the two neighborhoods immediately to the north and south.

In the northern Malayeen district a witness said Islamic State fighters had set fire to a collection of mobile homes, once used by Iraqi security forces, apparently to create a smokescreen against air strikes.

“I can see flames rising up, near the main street,” he said. “Daesh (Islamic State) don’t let the fire engines get to the fire to extinguish it”.

Several witnesses, on both sides of the Tigris River which splits Mosul’s eastern and western halves, said they heard bursts of celebratory gunfire after the militants claimed falsely they had made sweeping counter-attacks against the army.

“We heard a voice from the mosque – outside prayer time – of a man shouting: ‘Allahu Akbar…brave soldiers of the caliphate have regained control of Bartella and Qayyara,” said one resident, referring to two forward bases used by Iraqi forces.

“We know they are lying,” he said. “The truth is hidden from no one.”