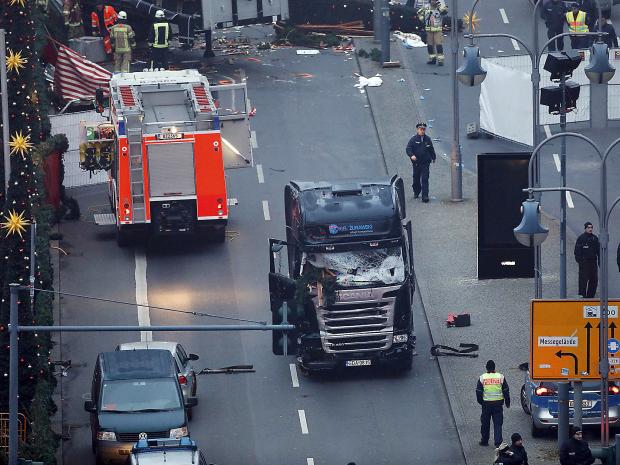 The Levant News — “The Islamic State” group (ISIS)claimed responsibility Tuesday for a truck attack at a Christmas market in Berlin that killed 12 people and injured 48 others. German police are still hunting for the driver of the truck.

“The executor of the operation … in Berlin is a soldier of the Islamic State [who] carried out the attack in response to calls to target nationals from the coalition countries,” the militant group said, referring to the member countries of the anti-IS coalition battling the jihadists in Syria and Iraq.

The militant group made the claim on its Amaq propaganda agency.

Germany is not actually involved in combat operations against the IS group. But it does have Tornado jets and a refueling plane stationed in Turkey to support the coalition in Syria, as well as a frigate protecting a French aircraft carrier in the Mediterranean.

Federal prosecutors said authorities had released a man who was detained late on Monday, a Pakistani citizen who came to Germany last year as an asylum-seeker, for lack of evidence. They noted that witnesses were able to follow the truck driver from the scene but then lost track of him. The man arrested matched witness descriptions of the truck driver but investigators were not able to prove his involvement.

Under German law, prosecutors have until the end of the calendar day following an arrest to seek a formal warrant keeping a suspect in custody. The detained man denied involvement in the attack.

“We may still have a dangerous criminal out there,” said Berlin Police Chief Klaus Kandt.

The German government said that Chancellor Angela Merkel had spoken with the leaders of France, Turkey, Italy, Greece, Poland, Sweden and Spain following the attack. The leaders expressed their sympathies in separate phone conversations on Tuesday.

Merkel and President Joachim Gauck attended a memorial service at Kaiser Wilhelm Memorial Church, which lies next to the Christmas market that was attacked on Monday night.

The nondenominational service came hours after Merkel and other German political leaders laid white roses outside the church, which serves as a symbol of the destructive effects of war. The 19th-century church was badly damaged in World War II and only the remains of its spire were left standing before an extension was added in 1961.

“Berlin lives with this wound, which was created by violence and war. This church is a memorial – it shows us what happens when people give free rein to their hatred, when they pursue the path of violence to the end,” said Markus Droege, Berlin’s Lutheran bishop.

An umbrella organisation for several German Muslim groups, the Muslim Coordination Council, condemned the attack in a statement on Tuesday. “We are deeply shocked and condemn the cowardly attack in the strongest terms,” it said, adding: terrorism “does not stop in the face of innocent people and what is sacred to people”.

French lawmakers and government officials observed a minute of silence to express their solidarity with Germany.

Prime Minister Bernard Cazeneuve, in a speech to the lower house of Parliament, vowed to fight terrorism “without truce or pause”.

The Berlin attack was reminiscent of a July 14 attack in Nice in which a truck mowed through a crowd that had gathered to watch the Bastille Day celebrations, killing 86 people.

Source: FRANCE 24 with AP and REUTERS

US Treasury Lebanese for Hezbollah links

The U.S. Department of the Treasury’s Office of Foreign Assets Control (OFAC) on Tuesday designated …