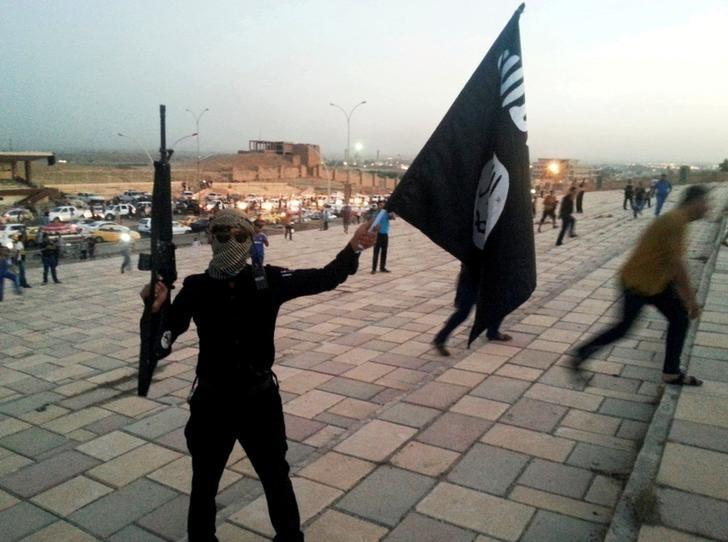 A fighter of the Islamic State of Iraq and the Levant (ISIL) holds an ISIL flag and a weapon on a street in the city of Mosul, Iraq June 23, 2014. REUTERS/Stringer/File Photo

IS executes dozens of prisoners near Mosul, officials say

By Stephen Kalin and Michael Georgy | ISIS militants have in recent days executed dozens of prisoners taken from villages the group has been forced to abandon by an Iraqi army advance on the city of Mosul, officials in the region said on Wednesday.

Most of those killed were former members of the Iraqi police and army who had lived in areas under ISIS control south of Mosul, Abdul Rahman al-Waggaa, a member of the Nineveh provincial council, told Reuters.

The militants forced them to leave their homes with their families, and took them to the town of Hammam Al-Alil, 15 km (9 miles) south of Mosul, where the executions took place, he said in Erbil, the capital of the Kurdish region, east of Mosul.

The men were shot dead, he said, quoting the testimony of remaining residents of the villages and people displaced from the area.

The executions were meant “to terrorize the others, those who are in Mosul in particular”, and also to get rid of the prisoners, he said.

“Daesh (Islamic State) was taking families from each village it left,” said Waggaa.

Separately, Hoshiyar Zebari, an influential Kurdish politician, told Reuters in Erbil that at least 65 people had been executed by Islamic State south of Mosul three days ago.

The militants started rounding up hostages in the villages of Al-Hudd and Al-Lazzaga, after a revolt broke out against them a week ago to aid the army’s advance, said Zebari, a former Iraqi finance minister and foreign minister.

More than 20 were put to death as punishment in two villages located just north of the town of Qayyara, he said.

Families of the executed hostages are being held in Hammam al-Alil or in Mosul, he said.