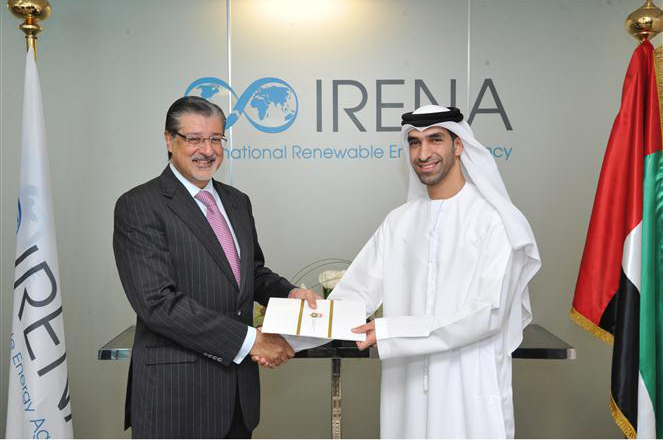 Irena to focus on untapped potential of renewables in transport, heating and cooling

As renewable energy contributed more than half of global capacity additions in the power sector in recent years, the Abu Dhabi-based International Renewable Energy Agency (Irena) wants to focus on untapped potential of renewable energy in end use sectors, a top official said here on Monday.

He was talking at the opening session of the 14th council of the Irena in Abu Dhabi, attended by more than 350 government representatives from 115 countries — including ministers and high-level officials. The council meets twice annually to facilitate cooperation among members, oversee implementation of the Irena work programme and complete preparations for the agency’s annual assembly in January.

Ameen highlighted the growing importance of the city headquartering Irena: “Abu Dhabi is a city… which is not only a key hub for global energy cooperation but also for cooperation and dialogue among cultures, the recent opening of the Louvre Abu Dhabi being a glaring example!” he said.

The director-general said rapid and disruptive change is leaving no economic sector untouched. In the energy sector, an energy transformation of a scale and reach, few would have envisaged just some years ago, is reshaping the way energy is produced, distributed and consumed, he said.

Irena is ready to seize new opportunities that can contribute towards advancing its mission and increasing its impact, at a time when the global drive to implement the Paris Agreement and the SDGs [Sustainable Development Goals of the UN] is providing further impetus to renewable energy deployment worldwide, Ameen said.

Zhi Guo, Chief Economist of China’s national Energy Administration, who was elected as the council chair said: “We will promote a revolution in energy production and consumption, and build an energy sector that is clean, low-carbon, safe and efficient.”

The programmatic discussions at the council will cover increasing the share of renewable energy through Nationally Determined Contributions, and scaling-up renewables deployment through effective project facilitation.

At the side-events of the council, delegates will attend events on the modern use of bioenergy and the crucial role of electricity storage as a means to provide flexibility to future energy systems. These are critical issues for Irena’s efforts to take the energy transformation to the next level and accelerate the decarbonisation of the energy sector. There will also be another event on accessing funding in the sixth cycle of the Irena/Abu Dhabi Fund for Development Project Facility.

Irena achieves near universality in membership

A young global organisation headquartered in Abu Dhabi has attracted most of the world nations as its members in a few years. “We have reached near universality in a very short time since Irena’s formal establishment more than six years ago, with 153 members (152 States and the European Union ) and 27 others engaged in the membership processes,” said Adnan Z Ameen, director-general of the International Renewable Energy Agency (Irena).

“This is a unique achievement in the recent annals of international cooperation,” he said at the Irena council meeting in Abu Dhabi.

Lebanon, El Salvador, and Uzbekistan joined recently and Nepal is expected to join in December. Forty-eight nations have designated a permanent representative to Irena.