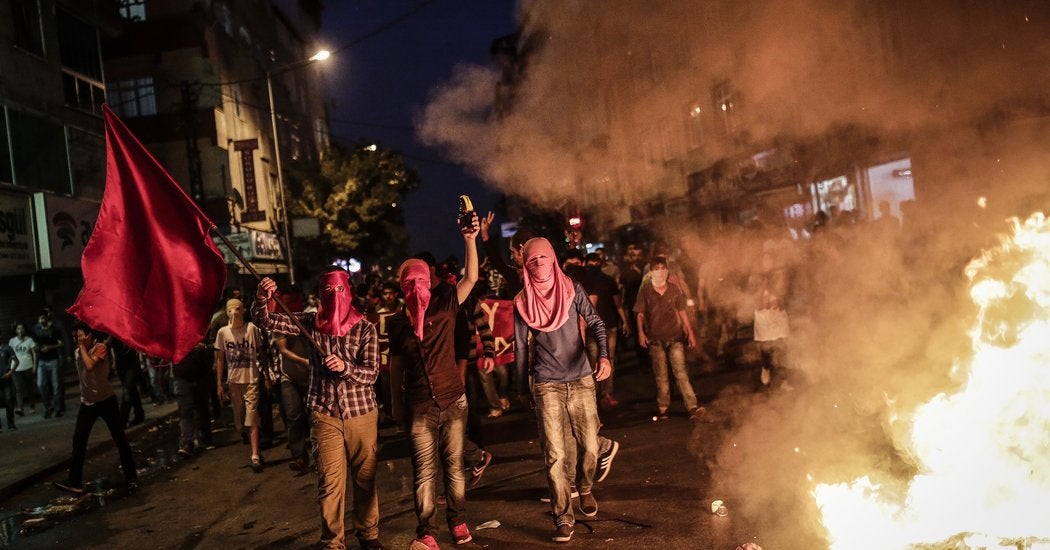 Hundreds of angry Iraqis took to the streets late Thursday to decry deadly strikes on an Iraqi tourist resort the previous day that the government has blamed on Turkey. The protests erupted just hours after the families of those killed in the shelling buried their loved ones.

Turkey's foreign minister rejected accusations that his country's military carried out Wednesday's attack on the district of Zakho in Iraq's semi-autonomous northern Kurdish region. At least eight Iraqis were killed, including a child, and 20 were wounded.

Turkey frequently carries out airstrikes and attacks into northern Iraq and has sent commandos to support its offensives targeting the outlawed Kurdistan Workers Party, or PKK. The insurgents, who have for decades battled the government in Ankara, have bases in the mountainous Iraqi region. And though civilians, mostly local villagers, have been killed in the past, Wednesday's attack marked the first time that tourists visiting the north from elsewhere in Iraq were killed.

Speaking with Turkish state broadcaster TRT, Foreign Minister Mevlut Cavusoglu said Turkey was willing to cooperate with Iraqi authorities to shed light on the "treacherous attack." He offered to bring the wounded to Turkey for medical treatment.

The protests outside what was formerly the Turkish Embassy in Baghdad's neighborhood of Waziriah started peacefully but later escalated. Some in the crowd carried signs that read: "Turkey's attacks on civilians is a crime against humanity."

Others threw stones at the riot police and burned tires. At one point, clashes erupted when some demonstrators tried to storm in to replace the Turkish flag that was still flying over the building with an Iraqi one.

Several protesters were hurt when the police threw back some of the stones hurled at them. The Turkish Embassy, which had relocated to the heavily fortified Green Zone last year, cancelled visa appointments for the day.

Earlier Thursday, Iraq's government summoned Turkey's ambassador in protest and caskets carrying the bodies of victims were flown from the semi-autonomous Kurdish-run northern region to Baghdad for burial.

Before the flight, the Iraqi Kurdish region's president, Nechirvan Barzani, laid a wreath on one of the caskets and helped carry it onto a military plane.

At the Baghdad airport, Prime Minister Mustafa al-Kadhimi received the dead and met with the families of those killed, offering his condolences. He promised the wounded would be taken care of.

There remained a discrepancy over how many were killed in Wednesday's attack. Iraq's military said eight people died but nine caskets were loaded onto the military plane Thursday.

Cavusoglu, Turkey's top diplomat, claimed the attack was a "smokescreen" aimed "at preventing Turkish military operations in the region."

"We did not conduct any attack against civilians," he said and insisted that Turkey's "fight in Iraq has always been against" the PKK.

The attack catapulted into the spotlight Turkey's ongoing military operations against Turkey's Kurdish insurgents in northern Iraq — an issue that has long divided Iraqi officials. With deep economic ties between the two countries, many hesitate to damage relations with Ankara.

Baghdad and Ankara are also divided on other issues, including the Kurdish region's independent oil sector and water-sharing. But in the aftermath of the attack, anger against Turkey is mounting on the Iraqi street.

In April, Turkey launched its latest offensive in northern Iraq, part of a series of cross-border operations that started in 2019 to combat the PKK.

The Iraqi government condemned Wednesday's attack as a "flagrant violation of Iraq's sovereignty," convened an emergency national security meeting and ordered a pause in dispatching Iraq's new ambassador to Ankara.

Iraq's Parliament was also to convene on Saturday to discuss the Turkish attack. Al-Kadhimi accused Turkey of ignoring "Iraq's continuous demands to refrain from military violations against Iraqi territory and the lives of its people."

The PKK, listed as a terrorist organization by Turkey, the United States and the European Union, has led an insurgency in southeastern Turkey since 1984 that has killed tens of thousands of people.

Ankara has pressed Baghdad to root out the PKK from the Kurdish region. Iraq, in turn, has said Turkey's ongoing attacks are a breach of its sovereignty.