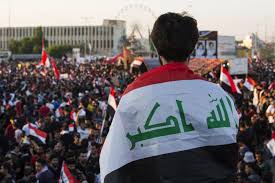 The anti-corruption protests in Iraq have been described as Arab Spring 2.0

Iraq’s cabinet decided on Tuesday to postpone the general election to Oct. 10 from June, the state news agency INA said.

The government last year set a general election for June 6, 2021, roughly a year ahead of when it would normally be held, but Iraq’s Independent High Election Commission (IHEC) on Monday proposed it be delayed to October to allow more time to prepare.

Early elections were a key demand of anti-government protesters who staged mass demonstrations that started in October 2019. Hundreds were killed by security forces and gunmen suspected of links to militia groups.

Iraq’s Prime Minister Mustafa al-Kadhimi said on Tuesday the decision to set a new date to hold an early contest was made to give IHEC enough time to be fully prepared to hold fair and transparent elections, a cabinet statement cited Kadhimi as saying.

Kadhimi was selected by parliament in May to head a government that would guide the country towards early elections. His predecessor Adel Abdul Mahdi quit under pressure from protests in late 2019.

Activists who led rallies in October 2019 also demanded fairer elections and changes to Iraq’s voting process and election committee after widespread accusations of fraud in the last nationwide vote in 2018.

Pushing back elections by Kadhimi’s government could cause further resentment among activists and protesters who consider delaying elections an attempt to ignore their key demands.

“We took to the streets to demand change through early elections but now we are facing stalling and delay. This is like a stab to our demands,” said protest activist and law student Mutaz Imad in Baghdad.