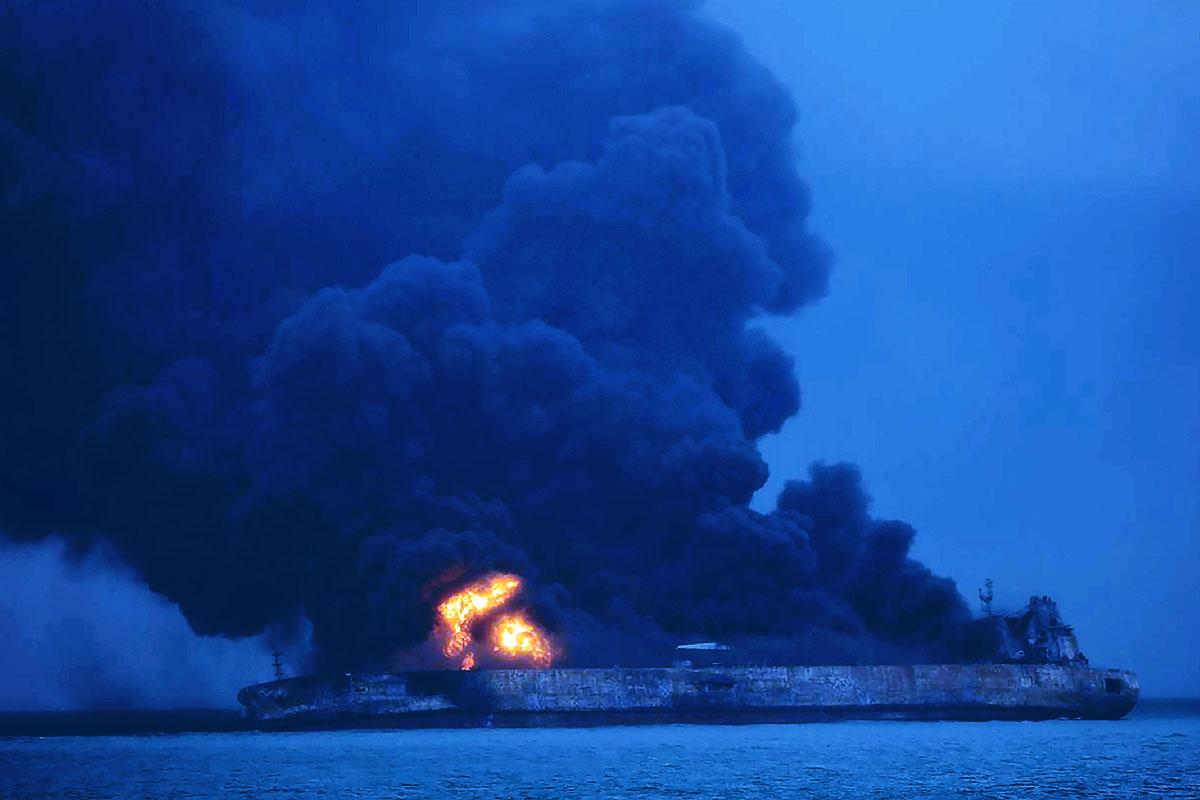 A tanker carrying Iranian oil and run by the country’s top oil shipping operator was ablaze and spewing cargo into the East China Sea on Sunday after colliding with a Chinese bulk ship, leaving its 32 crew members missing, the Chinese government said.

Thick clouds of dark smoke could be seen billowing out of the Sanchi tanker <C}KS7309492494>, engulfing the vessel as rescue efforts were hampered by bad weather and fire on and around the ship, Mohammad Rastad, head of Iran's Ports and Maritime Organisation, told Iranian television. (Graphic: Map showing ship collision location - tmsnrt.rs/2CBgqai)

The Sanchi collided with the CF Crystal <C}BO7309522955> about 160 nautical miles off the coast near Shanghai on Saturday evening, the Chinese Ministry of Transportation said in a statement.

The Panama-registered tanker was sailing from Iran to South Korea, carrying 136,000 tonnes of condensate, an ultra light crude. That is equivalent to just under 1 million barrels, worth about $60 million, based on global crude oil prices.

“Sanchi is floating and burning as of now,” the ministry said. “There is an oil slick and we are pushing forward with rescue efforts.”

It had sent four rescue ships and three cleaning boats to the site by 9 a.m. (0100 GMT) on Sunday, it added.

South Korea also sent a ship and helicopter to help. A Korean Coast Guard official confirmed the tanker was still raging at 1 p.m. (0500 GMT). He declined to be identified as he was not authorized to speak to the media.

The tanker’s 32 crew members were all Iranian nationals except for two Bangladeshi nationals, the Chinese transport ministry said.

“There is a wide perimeter of flames around the vessel because of the spillage and search and rescue efforts are being carried out with difficulty,” Rastad said.

“Unfortunately, up to this moment, there is no news of the crew,” he said.

The incident marked the first major maritime incident involving an Iranian tanker since the lifting of international sanctions on Iran in January 2016.

There was a collision involving an NITC-operated supertanker in the Singapore Strait in August 2016, but there was no loss of life or pollution.

The Chinese government gave no details of the size of the spill. The Foreign Ministry said in a separate statement that the cause of the incident was under investigation.

Reuters ship tracking data shows Sanchi was built in 2008 and was managed by the National Iranian Tanker Co (NITC). Its registered owner is Bright Shipping Ltd.

It was due to arrive at Daesan in South Korea from Kharg Island in Iran on Sunday, according to Reuters ship tracking.

Sanchi collided with CF Crystal, registered in Hong Kong, which was carrying 64,000 tonnes of grain from the United States to China’s southern province of Guangdong, the government said.

CF Crystal, which was built in 2011, was due to arrive in China on Jan. 10, according to Reuters ship tracking data.