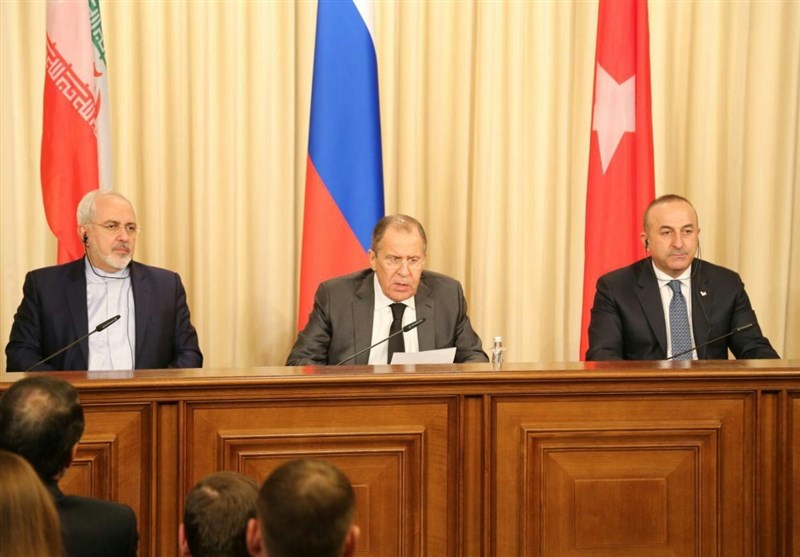 TEHRAN (Tasnim) – Iran, Russia and Turkey issued a joint statement on Tuesday, calling for continued cooperation on Syria and reiterating their respect for Syria’s sovereignty, independence, unity and territorial integrity.

According to the statement, the ministers of foreign affairs of the Islamic Republic of Iran, the Russian Federation and the Republic of Turkey, meeting in Moscow on Tuesday, agreed on the following:

1. Iran, Russia and Turkey reiterate their full respect for sovereignty, independence, unity and territorial integrity of the Syrian Arab Republic as a multi-ethnic, multi-religious, non-sectarian, democratic and secular state.

2. Iran, Russia and Turkey are convinced that there is no military solution to the Syrian conflict. They recognize the essential role of the United Nations in the efforts to resolve this crisis in accordance with UNSC resolution 2254. The ministers also take note of the decisions of the International Syria Support Croup (ISSG). They urge all members of the international community to cooperate in good faith in order to remove the obstacles on the way to implement the agreements contained in these documents.

3. Iran, Russia and Turkey welcome joint efforts in Eastern Aleppo allowing for voluntary evacuation of civilians and organized departure of armed opposition. The ministers also welcome partial evacuation of civilians from Fuaa, Kafraia, Zabadani and Madaya. They commit to ensure the completion of the process without interruption and in a safe and secure manner. The ministers express their gratitude to the representatives of ICRC and WHO for their assistance in conduction the evacuation.

4. The ministers agree on the importance of expanding ceasefire, unhindered humanitarian assistance and free movement of civilians throughout the country.

5. Iran, Russia and Turkey express their readiness to facilitate and become the guarantors of the prospective agreement, being negotiated, between the Syrian government and the opposition. They invited all other countries with the influence on the situation on the ground to do the same.

6. They strongly believe that this agreement will be instrumental to create the necessary momentum for the resumption of the political process in Syria in accordance with the UNSC resolution 2254.

7. The ministers take note of the kind offer of the President of Kazakhstan to host a relevant meetings in Astana.

8. Iran, Russia and Turkey reiterate their determination to fight jointly against ISIL/DAESH and Al-Nusra and to separate from them armed opposition groups