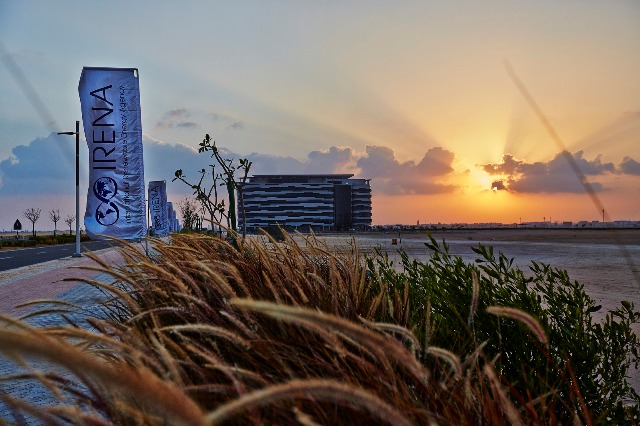 The UAE and the International Renewable Energy Agency, IRENA, today signed a supplementary agreement to the headquarters agreement that was signed in 2012 on hosting the Agency’s permanent headquarters in the UAE capital. The new document outlines the specific conditions governing the occupancy by IRENA of its headquarters premises.

Dr. Thani bin Ahmed Al Zeyoudi, Minister of Climate Change and Environment, and Francesco La Camera, Director-General of IRENA, inked the agreement in Abu Dhabi, in the presence of Dr. Nawal Al-Hosany, the Permanent Representative of the UAE to IRENA.

Highlighting the UAE’s progress in the field of renewable energy, Dr. Al Zeyoudi said, "The UAE is strongly committed to increasing the share of renewables in its energy mix through mega-projects, such as the 100MW Shams 1 concentrated solar power plant, the 1.17GW Noor Abu Dhabi, and the 5GW Mohammed bin Rashid Al Maktoum Solar Park. Guided by the UAE Energy Strategy 2050, the country has broken the world record for the lowest solar energy cost multiple times."

"We are pleased to sign the supplementary agreement with IRENA. Hosting the Agency in our flagship Masdar City reinforces the UAE’s leading role as a supporter of global renewables deployment endeavours. The country has implemented multiple grants and soft loan programmes to fund clean and renewable energy ventures around the world," he added.

Commenting on the signing, Francesco La Camera said, "Hosting IRENA shows once more the UAE’s long-term commitment to the energy transition. Based in the UAE, IRENA advances low-carbon energy solutions and sustainable development pathways that serve as a strong example to the region and beyond. IRENA’s efforts to promote the deployment of sustainable energy in line with climate and development goals, are strengthened by the UAE’s unwavering support."

For his part, Mohamed Jameel Al Ramahi, Chief Executive Officer of Masdar, the Abu Dhabi Future Energy Company, said, "The IRENA headquarters is a Masdar City landmark and a powerful symbol not only of our commitment in the UAE to advancing commercial renewable energy solutions, but also of our determination to apply new standards for sustainable urban development."

He added, "IRENA has become an invaluable repository of knowledge for both government and business decision makers driving the energy transition in MENA, and a passionate supporter of Abu Dhabi Sustainability Week and the UAE’s many other sustainability initiatives. Today’s agreement will continue the positive momentum achieved to date."

IRENA is the intergovernmental organisation that supports countries in their transition to a sustainable energy future, and serves as the principal platform for international cooperation, a centre of excellence, and a repository of policy, technology, resources, and financial knowledge on renewable energy.

The IRENA complex in Abu Dhabi received four Pearls from Estidama - a UAE certification system measuring energy, water, and carbon efficiency. As the UAE’s first four-Pearl structure, it is one of the most advanced buildings in the country in addition to being among the most sustainable premises of any international organisation worldwide.