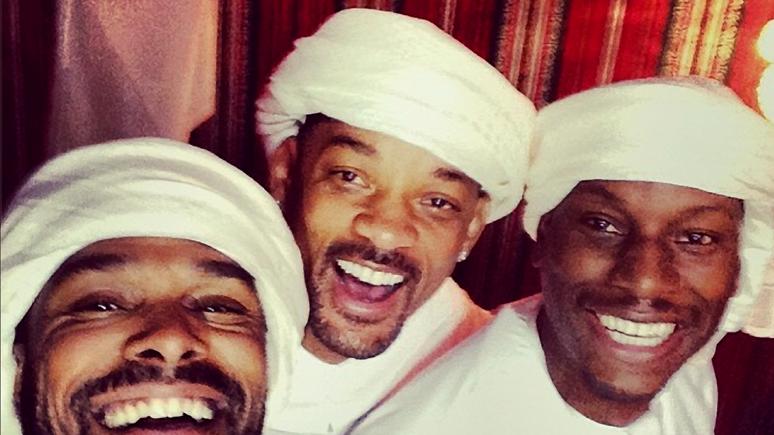 Inside Will Smith’s Dubai diary

Hollywood actor Will Smith continues to fill his Dubai photo album with many experiences, which has included a trip to the desert with wife Jada Pinkett Smith and son Trey, shooting for a hush-hush project, along with yet another picture of him hanging out at the Burj Khalifa.
Early on Wednesday, Will posted a picture of the family filming in the desert, writing: “Family Time in Dubai. I can’t wait to show y’all what we’re shooting!”

The Smiths were pictured wearing a keffiyeh staring at something in the distance.
The following day, the 50-year-old actor posted yet another picture from the world’s tallest building, after visiting it earlier in the week, writing: “A thousand years from now, humans are gonna look at the Burj Khalifa the Same way we look at the Pyramids... like “How the hell did they build that?”. But then they’ll just look it up on YouTube.”

Earlier, the Aladdin star posted a picture of himself seated on a toilet at the Burj Khalifa as he updated his fans about his UAE sojourn.
“This is the Highest Toilet ON EARTH!! Burj Khalifa, Dubai. 154th Floor. Sittin’ on top of the world! (The Joke was too Easy:-),” he posted on Instagram.

Over the past few days, the family has been busy with their Dubai escapades, which also saw Jada Pinkett play with elephants here, along with jump out of a plane to go skydiving above The Palm Jumeirah.

The celebrity couple are no strangers to Dubai, with Will earlier attending the red carpet screening of his action film Suicide Squad in 2017 and spending a few private holidays here.
Ever since he turned 50, Will has been on the road. Before Dubai, the actor also spent time in India, busting out a few moves on the set of the Bollywood film Student of the Year 2 with Tiger Shroff, before meeting filmmaker Karan Johar and actor Ranveer Singh for a few photo ops.
Will jet off to Taj Mahal in Agra soon after, posting pictures on his Instagram, while saying: “Lots of people don’t know this... but the Taj Mahal is a mausoleum built for a single person. Emperor Shah Jahan, so distraught over the death of his beloved wife Mumtaz Mahal, preserved her body for 22 years while he built the Taj Mahal as her final resting place.”
Will also spent time in the Indian holy city of Haridwar where he performed traditional Hindu rituals at a local temple.