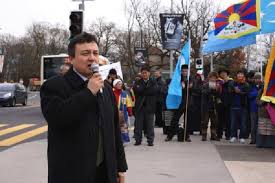 By Dipanjan Roy Chaudhury, for The Economic Times -- Days after giving permission to Dolkun Isa, chairman of the executive committee of the World Uyghur Congress (WUC), to attend a conference of Chinese dissidents in Dharamsala, India has cancelled his visa amid the hype surrounding his maiden trip to the country. However, IIshat Hassan, the chief of the Uyghur American Association, is expected to attend the meet.

Isa, whose grant of Indian visa had angered China, told ET from Berlin on Monday that his visa was cancelled through a short email last Friday evening. Isa claimed that no reason was given by Indian authorities for cancelling his visa. A home ministry spokesperson confirmed that his visa was cancelled. The Uyghur leader was issued a tourist visa and would not have been able to attend the conference under normal circumstances. The Chinese foreign ministry had reacted sharply as Isa has been brand a terrorist by it.

Isa hinted that his colleague Hassan will travel to India this week for the conference from April 28 to May 1 in Himachal Pradesh where the Tibetan government-in-exile is based. The conference titled 'Strengthening Our Alliance to Advance the Peoples' Dream: Freedom, Justice, Equality and Peace' is the initiative of Citizen Power for China, a US-based organisation led by exiled Chinese dissident Yang Jianli.

The conference will bring together 100 human rights activists and representatives of the Uyghurs, Tibetans, Mongolians, Falun Gong practitioners and Taiwanese, according to Isa. The Uyghurs and Tibetans have been politically, economically and culturally persecuted by the Chinese government and India as the world's biggest democracy and a neighbor of China must give Beijing lessons in democracy suggested Isa.

Talking to ET over phone from Berlin Isa alleged that both Uyghurs and Tibetans are victims of human rights violations for decades. "Our economic, political and cultural rights have been muzzled by Beijing...extrajudicial killings and disappearances are rampant in our regions," Isa said.

Isa claimed that WUC was a non-violent political group fighting for the rights and freedom of Uyghur region from Beijing. "We are not a terrorist organisation and not supporting any terrorist group," claimed Isa who fled from China in 1997 and has been a German citizen since 2006.