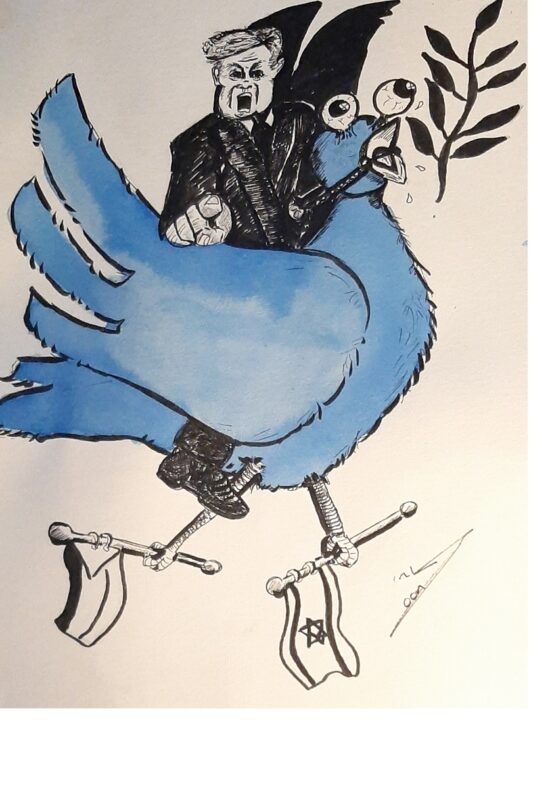 Image credits: An artistic impression of Donald Trump tweeting away. Special to the Levant News courtesy of Joon W.

The Inconvenient Truth about former US President Donald Trump’s accomplishments

“You either die a hero, or you live long enough to see yourself become the villain,” Harvey Dent, district attorney of Gotham City said in “The Dark Knight”. Introducing a fatalistic idea that being a hero comes with a certain responsibility and is sometimes a dangerous task. For outsiders former U.S. president Donald Trump falls in both categories: a hero to his followers and a villain to everyone else. For the latter, even his impressive list of accomplishments while in office seems irrelevant.

By Arthur Blok
Donald Trump is without doubt the most controversial American presidents in modern times. Some have seen him as the salvation of a faltering democracy, others as an existential threat to that same democracy.

It will be a long time before historians arrive at any kind of consensus concerning the significance of the Trump presidency. If ever they reach that. However, some consequences of his tenure are already apparent. One of those is the impact he has had on the nation’s defense position. Trump has done more in four years to shift the path of U.S. military preparations than most presidents accomplished in eight.

Military record
Trump's military record stands apart from other modern American presidents. Supporters praise him for being the first president since Ronald Reagan "not to start a new war." Is this true? In a way it is.

Formal declarations of war are rare in American history and can be counted on one hand, the most recent formal declaration of war is the Second World War. Most conflicts fall under the pretext of "authorizations of military force" approved by Congress. The latter gave permission to President George W. Bush in 2001 to start the “War on Terror” in Afghanistan and the invasion of Iraq in 2003, and for his father, George H.W. Bush in 1991 to start the Gulf War.

Republican president Ronald Reagan - in the White House between 1981 to 1989 - got approval in 1983 to send forces to Lebanon to reduce the threat of civil war. While other presidents have got involved in foreign conflicts. Barack Obama brought the U.S. into the Libyan Civil War in 2011. Before him, Democratic president Bill Clinton got authorization from the United Nations and funding from Congress to bring 20,000 American troops into the Bosnian War in 1995.

Trump did in fact the opposite. He withdrew thousands of troops from both Iraq and Afghanistan, fulfilling one of his campaign elections pledges to put a stop to America's “endless wars."

Abraham Accords
In addition in August 2020 the Abraham Accords were signed. A joint statement between Israel, the United Arab Emirates and the United States that marked the first public normalization of relations between an Arab country and Israel since that of Egypt in 1979 and Jordan in 1994.

Soon after Bahrein followed suit. In the same period both Sudan and Morocco established diplomatic ties with the Israeli’s as well. If it would have been for a second Trump term Saudi Arabia and Oman would have probably done the same.

Former president Barack Obama received the Prize after a simple speech, full of flaws, at the Cairo based conservative Al-Azhar University. A speech, ironically, full of big words and good intentions, but in practice it was empty. It meant absolutely nothing on the ground.

This empty exercise, was rewarded with the ultimate Peace Award.

While in office Trump not only secured diplomatic breakthroughs in the Middle East. He also put a lot of effort in easing tensions in Asia. Having a first of its kind top conference with his North Korean counterparts. A conference including an unprecedented meeting with Kim Jong-un. To no avail.

You cannot blame the good man for at least trying to talk some sense into ‘Little Rocket Man’. Not the easiest material to work with. That is evident by now.

U.S. Economy
For the record, it will be hard to find an economist that would deny the fact that the U.S. was experiencing an unprecedented economic boom before the China virus pandemic put an abrupt end to that.

A surplus in job opportunities for Americans (of all backgrounds), tax relief for the middle class, job creation and investments in Opportunity Zones, deregulation, and trade policies and deals. The nation saw the lowest unemployment rates since the sixties, a booming housing market and the list of inconvenient economic accomplishments goes on and on.

Another pillar of the Trump’s era is the over 450 miles of new border wall between the U.S. and Mexico. Other highlights are “imposed restrictions on certain Chinese officials, internal security units, and companies” for their complicity in persecuting members of religious groups in China. Not to forget the blacklisting of various Lebanese and Syrian corrupt politicians. And the list goes on.

Shadow Campaign against Trump
However, there is one factor that should be taken into consideration: the Trump-factor. As much Obama’s style was loved, Trump’s style was despised. Initially praised for his fresh wave of anti-establishmentism, but now merely remembered as an unpleasant narcissistic style of leadership.

Overshadowing all his accomplishments.

The hatred towards his personality went as far that group of Democratic opponents started a ‘shadow campaign’ to rigged the 2020 election. All set out in detail by Time magazine last week in a shameless article: “The Secret History of the Shadow Campaign That Saved the 2020 Election".

A myriad of pre- and post-election actions taken by a careless coalition of Democratic operatives, grassroots activists, mainstream media, tech companies, and corporate CEOs before and after the 2020 presidential election.

According to the article, the effort consisted of “a well-funded cabal of powerful people, ranging across industries and ideologies, working together behind the scenes to influence perceptions, change rules and laws, steer media coverage and control the flow of information.”

Of course not with the intention of subverting the election, but rather as part of a heroic grassroots movement intent on salvaging American democracy and preserving the integrity of this and future elections.

Right. It is all a matter of perspective.

As if the roughly 75 million Trump voters do not exist and are irrelevant to the said noble cause. Credible doubts from Republicans about matters such as mail-in voting, voter fraud, concerns about delayed voting results and other similar issues were framed as “Trump’s lies,” “conspiracy theories” or “Bad actors spreading false information”.

The list with admitted scandals in the Time article is impressive. Please take the time to read it carefully and draw your own conclusions.

Anticlimax
A sad climax in the anti-Trump campaign - all with the best intentions of course - was the overall social media ban leading up to the Democratic enforced unconstitutional impeachment procedure that kicked off this week.

A ludicrous waste of time.

Anyone literate in the English language understands that the concept of impeaching a former president is entirely absent from the U.S. Constitution. Removing someone from office who is no longer in office.

A show trial deriving from a Democratic complex by a bunch of frustrated individuals who unsuccessfully tried to impeach Trump in the past four years due to lack of credibility and evidence.

A group of professional Democratic politicians refusing to admit the inconvenient truth about a former US president’ accomplishments. Backed up in the Senate by a handful of lost Republicans.

All still very angry that Trump largely ruined their image by unmasking them as phonies.

God Save the USA.