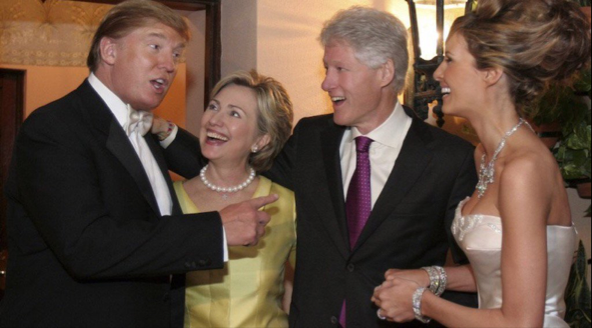 How Trump Is Corrupting Hillary’s Administration

The Levant News — by Graham E. Fuller– The scariest thing about Donald Trump’s candidacy is not that a guy like him is running for top office, but rather the disastrous impact he is going to have on a Hillary administration.

And the Donald probably deserves a great deal of it.

Yes, we can all see now how Trump is engaged in shredding, maybe even remaking the Republican party—creative destruction. That, in the view of many including myself, is basically a good thing, given how far off the rails of reality the party has drifted. Trump has trashed the neocon war party, blamed George W. Bush for the debacle in Iraq and elsewhere, wants to throttle way back on foreign wars, and has declared a readiness to talk to Putin—otherwise treated in the US press as toxic and satanic. (Though even Chuck Hagel, former Secretary of Defense, recently had the temerity to suggest that things with Russia were getting dangerous and that we should be in constant dialog with Putin.)

Like many others, I have been galvanized at watching the spectacle of Bernie Sanders proclaiming issues in his campaign that had been virtually off limits for political discussion for decades: gap between rich and poor, rapacious international trade deals, a fair wage, free university education, the call for US balance (gasp!) in handling the Arab-Israeli, issue, etc.

The great thing about Bernie—even if he probably won’t get nominated—is that he has pushed hawkish, friend-of-Wall-St Hillary to the left. She has as much acknowledged that. That will be Bernie’s greatest legacy. I would have hoped that the issues Sanders has raised can never be shoved back into the political toothpaste tube again.

That was the hope. But now along comes Trump. The right—and especially the neocons—are hysterical about what he is doing to the Republican party— of neo-cons, hawks, Wall Street cash recipients, fundamentalist Christian, Tea Party, and US global supremacy. They are pulling out all stops in a desperate attempt to block Trump at all costs. Many of them already say they will vote for Hillary, such is their fear of the Donald.

And herein lies the fear. Just what does that do to Hillary—ever tacking to the shifting winds of popular opinion? Bottom line is that Democrat party nominee Hillary will no longer have to worry about winning over the Sanders’ left—some of whom might have stayed home on election day. The massive support of Republicans, and especially neocons, will bail Hillary out. Hillary will indeed embrace this Republican support—and will accommodate to it. Indeed her basic political instincts have been all along in that direction anyway— rather than to the left.

And that means we are guaranteed to have a President Hillary Clinton far to the right of Obama—who barely qualifies even as centrist himself.)

In short, the essential pressures that Bernie has been exerting to pressure Hillary to the left—so vital to balanced government—are being cancelled out. Bernie’s influence, and all those who revel in the fresh air of his platform, will be drowned in the new love-fest between Hillary and the Republicans—whose key neocon figures like Robert Kagan and Charles Krauthammer now enthusiastically and publicly embrace her.

The handwriting on the wall is clear: the advisors, counsellors, so-called brain trusts and special aides around her (some of whom even infiltrated into Obama’s ranks) —those who remain blindly impervious in their serial defeats in foreign policy—they will all be back in full force to offer us same old same old losing foreign policies dating back to George W.

And so the US will continue to be virtually the only democratic country in the world whose political spectrum runs boldly from Right to Center—and then stops. There is no Left in America. We operate on half a spectrum.

Why do I cringe in using the word “Left”—even to describe myself? Because Left is a dirty word in the US. One can speak freely of politicians on the Right. But to say that someone is on the Left is fightin’ words—it smacks of the un-American.

Trump’s delivery of the neons and Republican establishment to Hillary’s door will be his final and greatest damage to our political order. He will now bring out all the very worst instincts in Hillary that some of us had hoped might have been softened or nuanced through Bernie’s unwavering spotlight on what really ails the nation. Precisely in his own defeat will Trump bring about his greatest revenge in decisively coloring the next administration.

US Iran envoy now in talks with Europe over nuclear deal