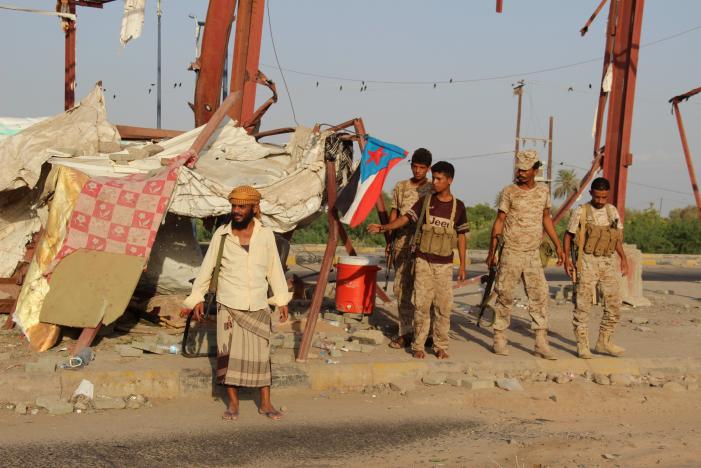 Houthis put an end to all UN activities in Sanaa

The Houthi administration in Yemen has suspended all United Nations and humanitarian flights to the capital Sanaa as its Saudi-led coalition foe blocks commercial vessels in the Red Sea port of Hodeidah.

The Iran-aligned Houthis took over Sanaa and most cities in 2014 after ousting the Saudi-backed government of Abd-Rabbu Mansour Hadi. The ensuing war has led to a major humanitarian crisis.

Since then, only U.N. and humanitarian flights have been allowed by the coalition, which controls Yemeni airspace, to land at the capital’s airport.

The decision, which the Houthis blamed on a fuel shortage, comes as the coalition holds 21 commercial vessels in Hodeidah port, preventing more than 500,000 tonnes of fuel from entering the country.

The group said the suspension took effect on Wednesday.

“Our inventories are very scarce…we have been waiting for three months, now we have reached a dangerous level,” said Khaled al-Shayef, managing director of Sanaa airport.

“We have informed the U.N….but we haven’t heard from them so far.”

The Houthi foreign ministry sent a letter on Aug. 30 to the United Nations saying that for the airport to continue servicing its flights, the organization must provide the airport with 30,000 liters of diesel, 15,000 liters of petrol and 3,000 liters of fuel oil for other equipment, sources familiar with the matter said.

U.N. officials think the airport needs less than half of that amount of fuel, U.N. sources said.

“They are using the humanitarian response as an instrument.. They know we can’t have the airport closed, so they want us to pressure the coalition,” said a U.N. official who declined to be named.

Houthi officials could not be reached for further comment, but the group has blamed the Saudi-led coalition of waging economic warfare on Houthi-held territories by holding U.N.-cleared commercial vessels in Hodeidah port.

The contested Red Sea city is the entry point for more than 70% of Yemen’s imports of commercial goods and aid.

As of Sept. 3, 21 vessels have been cleared by the Djibouti-based U.N. Verification and Inspection Mechanism but held by coalition warships stationed off Hodeidah.

The vessels carry a total of 525,000 tonnes of oil products including diesel, gasoline and liquefied natural gas, U.N. sources said. The coalition did not respond to a request for comment

The Western-backed coalition intervened in Yemen in 2015 to try to restore Hadi’s government to power but the war, which has killed 100,000 people, has been in stalemate for years.

In Sanaa, dozens of cars formed long queues where drivers could wait for up to 48 hours. Fuel rationing imposed by authorities restrict private cars to a maximum of 40 liters of gasoline per week.

“We are enduring severe hardship. I have been queuing since yesterday and my turn hasn’t arrived yet and the ration is not enough anyway,” said Hassan al-Ghile, a taxi driver.

“We are calling on politicians, the U.N. and the world to end the blockade on the Yemeni people: Have mercy, have mercy!” Ghile said.