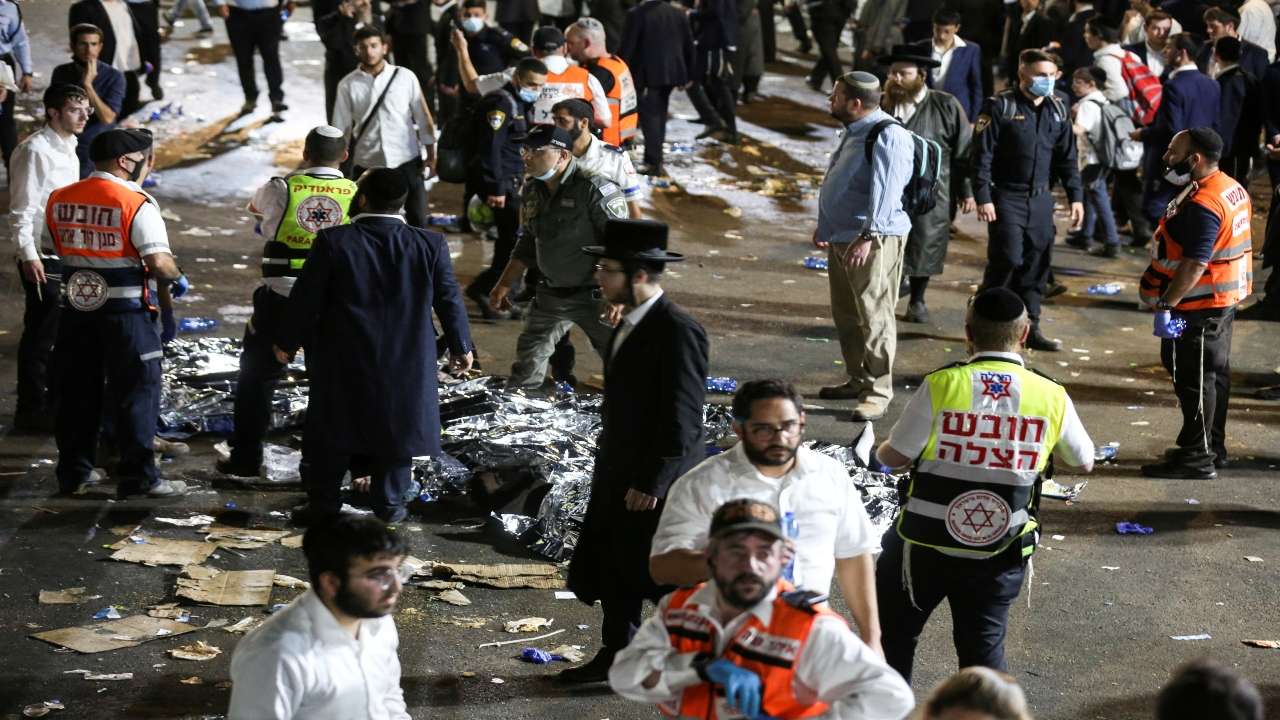 At least 44 people were crushed to death at an overcrowded religious bonfire festival in Israel on Friday, medics have said, in what prime minister Benjamin Netanyahu described as a “heavy disaster”.

The crush occurred as tens of thousands of ultra-Orthodox Jews thronged to the Galilee tomb of second-century sage Rabbi Shim Bar Yochai for annual Lag B’Omer commemorations that include all-night prayer, mystical songs and dance.

Witnesses said people were asphyxiated or trampled in a tightly packed passageway, some going unnoticed until the public address system sounded an appeal to disperse, as crowds packed the Mount Meron slope in defiance of Covid-19 warnings.

Medics said 103 people had been injured in what they described as a stampede. Casualties included children, witnesses said. The site is mostly gender-segregated and bystander video suggested the crush took place at one of the men’s sections.

“We were going to go inside for the dancing and stuff and all of a sudden we saw paramedics from [ambulance service] MDA running by, like mid-CPR on kids,” Shlomo Katz (36) told Reuters. He then saw ambulances come out “one after the other”.

Videos posted on social media showed chaotic scenes as Ultra-Orthodox men clambered through gaps in sheets of torn corrugated iron to escape the crush. Bodies lay on stretchers in a corridor, covered in foil blankets.

A police spokesman said overall capacity at Mount Meron was similar to previous years but that this time bonfire areas were partitioned-off as a Covid-19 precaution. That may have created unexpected choke-points on foot traffic, Israeli media said.

“Rabbi Shimon used to say that he could absolve the world . . . If he didn’t manage to cancel this edict on the very day of his exaltation, then we need to do real soul-searching.”

With the site cleared, rescue workers collapsed against railings, some weeping as their colleagues comforted them.

Mr Netanyahu called it a “heavy disaster”, adding on Twitter: “We are all praying for the wellbeing of the casualties.”

As rescue workers tried to extricate the casualties, police shut down the site and ordered revellers out. The transportation ministry halted roadworks in the area to enable scores of ambulances and pilgrims’ buses to move unhindered.

The Mount Meron tomb is considered to be one of the holiest sites in the Jewish world and it is an annual pilgrimage site. The event was one of the largest gatherings in Israel since the outbreak of the coronavirus pandemic more than a year ago.

Private bonfires at Mount Meron were banned last year due to coronavirus restrictions, but lockdown measures were eased this year amid Israel’s rapid Covid-19 vaccination programme that has seen more than 54 per cent of the population fully vaccinated.

By The Levant - 2 hours ago
An electrical fire swept through an Egyptian Coptic Christian church during Mass on Sunday, causing a stampede and killing at least 41 people, most of them children, security sources said. The blaze started just before 9 a.m. in the Abu Sifin church in the city of Giza where 5,000 people had gathered. The fire blocked […]
Read story