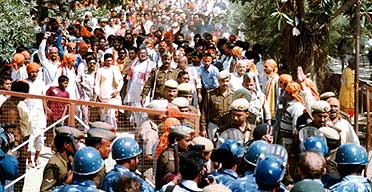 The first woman detained under India’s controversial new ‘Love Jihad’ laws has miscarried in custody, her family have told The Sunday Telegraph.

Yesterday a distraught Muskan Jahan, 22, called her mother-in-law, from a government shelter where she is being held in the city of Moradabad in Uttar Pradesh, saying she had bled profusely and then lost her baby.

Mrs Jahan believes her three-month-pregnant daughter-in-law was given an injection to abort the baby by staff because she converted from Hinduism to Islam and married a Muslim man.

“The tyrannical world has said goodbye to this child before he was able to see the world,” said Mrs Jahan.

Muskan’s husband Rashid, 27, is being held in an unknown prison in Uttar Pradesh for allegedly coercing Muskan into converting from Hinduism to Islam by marrying her.

The arrests have driven protests against BJP-lead government
A further four Bharatiya Janata Party-ruled (BJP) states are expected to pass similar laws later this month, despite the Indian government admitting in February it had not been able to find one case of so-called ‘Love Jihad’ nationwide.

While the law doesn’t specify any religion, police in Uttar Pradesh are targeting Muslims – at least ten Muslim men have been arrested so far but no Hindus.

Muskan and Rashid met when Rashid left his impoverished family home to work as a hairdresser in the northern Indian city of Dehradun.

Scraping to get by, he began to grow close to another migrant worker from Uttar Pradesh, a woman then known as Pinky.

The pair were employed by adjacent salons and Rashid began walking to work every morning with Pinky, making her laugh.

“Then, around five months ago, we got a sudden call from Rashid, he was very excited and he said that he had married the Hindu girl,” Mrs Jahan told the Sunday Telegraph.

“I scolded him that he did a wrong thing and asked him why he didn’t consult with us first. But, then he said he was coming home in July and we treated Pinky like our own daughter.”

Rashid got a new job in a salon in Moradabad and Pinky – who had taken the decision to convert to Islam and adopt the name Muskan before her marriage in July – soon fell pregnant, much to the delight of her mother-in-law.

“Like every mother, I also had a dream that my son should get married and then the happiness of all of us increased with the news of Muskan’s pregnancy,” said Mrs Jahan.

“There is no small baby in our house that we could play with on our lap and we had dreams of making the baby a good person through education.”

Rashid’s family
Hindus and Muslims have lived side-by-side in Uttar Pradesh for hundreds of years and while interfaith marriages are rare, they constitute three percent of unions.

However, since Mr Modi was re-elected with a landslide win in 2019, the BJP has implemented a string of policies protecting Hinduism. He has regularly been accused of Islamophobia.

The BJP has argued that Muslim men trying to brainwash Hindu women to convert to Islam before marriage to enact demographic change, a practice described as ‘Love Jihad’. India’s Muslim community constitutes just 14 per cent of the population.

On Tuesday, the police arrested Haider Ali, a Muslim from the town of Kushinagar, tortured him and threatened to “skin him alive”. Mr Ali was released the next day after it was discovered his bride was born a Muslim.

Rashid was arrested on Sunday after the family visited a lawyer in Moradabad to register their marriage in Uttar Pradesh, as the couple had married in neighbouring Uttarakhand.

The family’s route home was blocked by the Bajrang Dal, a hardline Hindu nationalist group, who threatened them and called the police.

The police arrested Rashid and took Muskan to the shelter home, despite her protesting the couple were happily married.

“This is what Muslims do, first they love, and then they carry out Love Jihad after a few months. We know Pinky [Muskan] is seeing love right now, but after a few days she will find it very difficult to live her life,” said Gaurav Bhatnagar, the Bajrang Dal leader from Moradabad.

“Our workers are active in the street, locality, villages, cities, everywhere. Our job is to inform the police when Love Jihad cases occur and then it’s the court’s job to punish them.”

When Mrs Jahan tried to visit Muskan at the Nari Niketan shelter on Saturday morning, she was refused inside the building.

“Fear aggravates in our family, I do not know what will happen when both of them get released but I am very scared,” said Mrs Jahan.

The Sunday Telegraph approached the shelter where Muskan is held but did not receive a response.