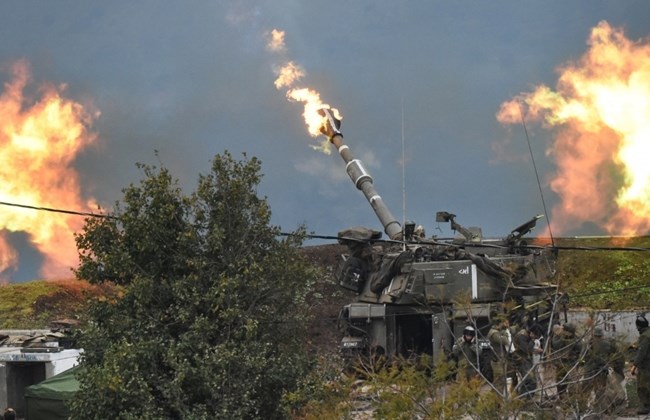 THE LEVANT NEWS — Hezbollah set off a bomb in an Israeli armored patrol in the occupied Shebaa Farms Monday, sparking Israeli shelling of southern Lebanon, in what appeared to be a limited escalation on the volatile border region that has remained largely quiet since 2006.

“A group of martyr commander Samir Kuntar in the Islamic Resistance detonated a large explosive device on the Zibdin-Kafwa road in the occupied Lebanese Shebaa Farms, targeting an armored Israeli patrol,” Hezbollah said in a statement claiming responsibility for the attack, in what seemed to be a retaliation for Israel’s killing of party commander Samir Kuntar.

“The explosion destroyed a Humvee vehicle hitting those inside,” the statement added.

Hezbollah’s Al-Manar TV channel quoted a security source as saying that “one of the vehicles targeted in the explosion was carrying a senior Israeli officer.”

Tensions on the Lebanese-Israeli border have been high since Kuntar, who staged a cross-border attack in Israel and spent nearly 30 years in a jail there, was killed in an Israeli airstrike in Syria last month.

Israel’s army said the explosion, targeting military vehicles in the Shebaa Farms area, prompted Israeli forces to respond with artillery shelling of areas in south Lebanon. It made no mention of casualties.

He denied reports that anti-tank rockets were fired or that any Israeli soldiers were abducted or wounded.

Israeli forces fired around 40 shells at areas near the south Lebanon border village of Wazzani, as its infantry units combed areas looking for other explosive devices while unmanned aerial vehicles hovered above.

“The Israeli enemy fired artillery shells, targeting the following southern towns: Wazzani, Majidieh, Abbasieh, Bastra, Halta and Mari,” the Army said in a statement. It added that the Israeli shelling prompted Army units deployed in the region to take “appropriate defensive measures,” while they followed up the situation with the U.N. Interim Force in Lebanon.

UNIFIL urged both sides to avoid an escalation, saying it had stepped up patrols across the area of operations in coordination with the Lebanese Armed Forces.

A UNIFIL statement said Force Commander Maj. Gen. Luciano Portolano was in immediate contact with the parties, urging both sides to exercise utmost restraint in order to prevent any escalation of the situation.

“The need of the time is to maintain security vigil and to exercise utmost restraint against any provocation,” Portolano said in a statement released by UNIFIL.

“General calm has been restored in the area and the parties have reassured me of their continued commitment to maintain the cessation of hostilities in accordance with Resolution 1701.”

UNIFIL has launched an investigation to determine the facts and circumstances of the incident, the statement said.

The U.N. special coordinator for Lebanon, Sigrid Kaag, expressed concern over the Hezbollah attack on the Israeli patrol and the retaliatory Israeli shelling of south Lebanon.In discussions with the parties, including regional stakeholders, Kaag stressed the risks posed to the stability of Lebanon, according to a statement released by her office. Kaag also highlighted the danger of miscalculation, which could lead to a deterioration of the situation on the ground.

“The special coordinator urged all parties to fulfill their obligations under Resolution 1701, and to refrain from any acts or rhetoric which could undermine stability across the Blue Line,” the statement said.

Israel has neither confirmed nor denied the airstrike that killed Kuntar along with eight others on a residential building in Jaramana near Damascus on Dec. 19. Israel is believed to have been behind more than a dozen strikes in Syria targeting either Hezbollah, the Syrian army or their interests over the past three years, but has not officially acknowledged or denied any of the attacks.