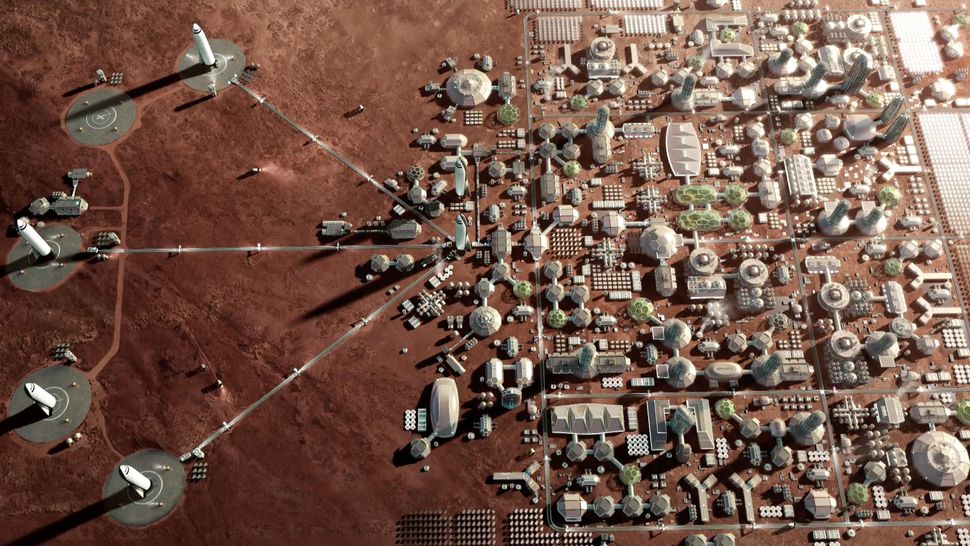 Here's what future Mars and lunar space colonies could look like

British architect Norman Foster is known for his designs here on Earth, but now his firm Foster + Partners is looking to expand its portfolio into the cosmos, with futuristic-looking designs for colonies on Mars and the moon.

The lunar and Martian habitats will be on display at the Goodwood Festival of Speed in Chichester, England, being held from July 12 to 15. A virtual reality demonstration will allow people to "walk" around the habitats on the Red Planet, and attendees will also be able to steer miniature remote-control robots around a Mars-like sand pit.

Foster + Partners first unveiled designs for a lunar habitat module in 2012, in partnership with the European Space Agency. Renderings show an astronaut outpost shrouded in lunar soil, which is molded into an exterior shell around the modules to protect them from radiation, asteroid strikes and temperature fluctuations.
The firm released plans for a Mars habitat three years later as part of NASA’s 3D-Printed Habitat Challenge. Foster + Partners won the second phase of the challenge in 2017.

The designs for the lunar and Martian habitats both feature inflatable pods that will be launched to the moon or Mars ahead of time. These will act as the base of the settlement, and then robot-operated 3D printers will cement together regolith — loose soil and rocks — to form a protective shield around the pods.

In the construction industry on Earth, using robots and large-scale 3D printing in the building process is relatively rare, “but when considering extra-planetary structures, they become an absolute necessity,” Irene Gallou, head of the research and development unit at Foster + Partners, told NBC News MACH in an email. “Forcing ourselves to incorporate these features into relatively small, but highly complex buildings lets us develop our knowledge and project into the future.”

Here’s how the architecture firm envisions being able to construct habitats on Mars and the moon.

Semi-autonomous robots begin the operation by digging a crater on Mars, the site of the future colony.

Inflatable habitat pods are rocketed to Mars, and land on the Red Planet with the help of a parachute and airbags. This soft-landing system has been used before by NASA on its Mars Pathfinder mission, which delivered a rover to the Martian surface in 1997.

Several small robots fuse regolith, or loose rocks and soil on Mars, into concrete, which acts as the building material for the habitat’s protective exterior shell. Foster + Partners has successfully lab-tested this method, dubbed Regolith Additive Construction, and the firm is awaiting field trials, Gallou said.

The operational Mars base upon completion, where an exterior regolith shell acts as the base’s protective covering. The future colony will not only be home to astronauts, but also to dozens of robots and automated vehicles.

The interior laboratory module, where the four astronauts of the outpost will live and work. A virtual reality demonstration of the interior of the Mars pods will take place at the Goodwood Festival of Speed.

Like with the Mars habitats, a rocket transports habitation pods to the moon, where they inflate and are ready for Regolith Additive Construction.

Autonomous robots 3D print a cellular structure around the habitation pods with the moon’s regolith, which protects the base from gamma radiation, meteorite impacts and temperature fluctuations.

The dwellings are designed to house four astronauts. In 2016, the head of the European Space Agency spoke of plans to build a “moon village” in collaboration with Foster + Partners, according to Space.com.

The lunar outpost would be based near the moon’s south pole, where the moon receives almost constant sunlight.