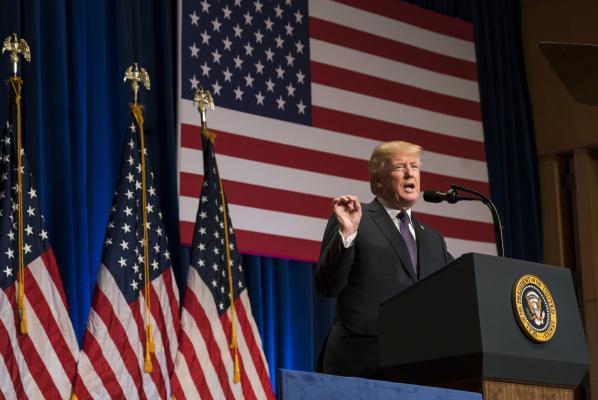 ‘Here is what my #shithole looks like:’ African countries and Haiti react to Trump’s remark

President Trump’s dismissal of Haiti, El Salvador and all of Africa as “shithole countries” whose people are not desirable for U.S. immigration  shocked people around the world and provoked swift condemnation.

The president made the remarks Thursday during a White House meeting with lawmakers. And reactions were swift.

“The African Union Commission is frankly alarmed at statements by the president of the United States when referring to migrants of African countries and others in such contemptuous terms,” said Ebba Kalondo, the spokeswoman for commission chair Moussa Faki. “Considering the historical reality of how many Africans arrived in the U.S. during the Atlantic slave trade, this flies in the face of all accepted behavior and practice.”

She added that the statement was particularly unpleasant coming from the leader of country that is a “global example” of how a strong and diverse country can be the product of migration and she expressed hope that “the values the U.S. is known for because of its particularly experience with migration will come to bear.”

“There is no other word one can use but ‘racist,’” he said at a briefing in Geneva. “You cannot dismiss entire countries and continents as ‘shitholes,’ whose entire populations, who are not white, are therefore not welcome.”

In El Salvador, the news of the comments quickly shot to the top of news websites. “Donald Trump insults El Salvador,” read one headline.

In Haiti, people took to Twitter to share pictures of their country — verdant green hills, palm trees in the sunset, and sparkling turquoise water.

“Hey #ShitHolePresident!” wrote Harold Isaac. “Here is what my #shithole looks like.”

Hey #ShitHolePresident ! Here is what my #shithole looks like

Haiti's ambassador to the United States condemned the statements and said that the country had asked for an official explanation of Trump’s comments from American officials.

“In the spirit of the people of Haiti we feel in the statements, if they were made, the president was either misinformed or miseducated about Haiti and its people, ” the ambassador, Paul G. Altidor, said in a statement.

Altidor said the Haitian Embassy in Washington was inundated with emails from Americans apologizing for Trump’s remarks, which he found heartening.

In Africa, where the entire continent was dismissed by Trump, there were similar reactions celebrating their countries’ beauty, with a well-known presenter for South Africa’s broadcaster SABC tweeting “Good morning from the greatest most beautiful ‘shithole country’ in the world!!”

The Johannesburg-based news site the Daily Maverick reported Trump’s remarks and then wryly wondered if “Casual Friday at the White House is soon to include hoods and tiki torches at this rate.”

Kenyan political cartoonist Victor Ndula, who has criticized Trump’s immigration policies in the past, drew a “‘White’ House map of Africa,” with regions labeled as “west of the shithole,” “southern shithole” and “horn of the shithole” for Kenya’s Star newspaper. 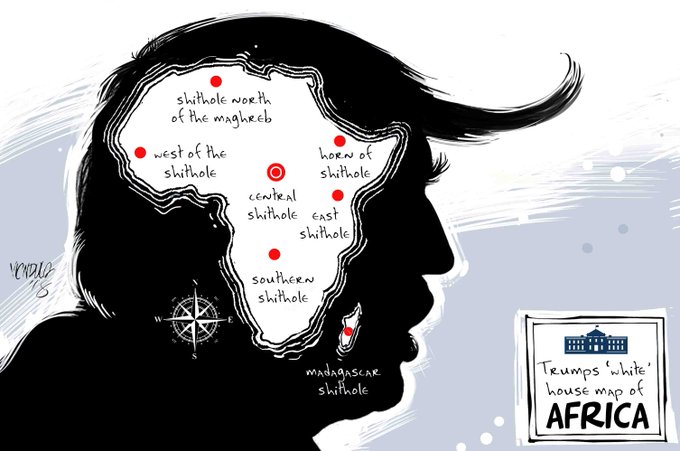 #NBONYCdaily Worth noting though what @POTUS thinks of #Africa ..direct flights to a s*******. Cartoon for @TheStarKenya

“It's derogatory and sad to belong to countries that have been labeled ‘shithole’ countries, lamented Moses Osani, a communications specialist on his lunch break in Nairobi. “Immigrants also contribute to the economy of the U.S. We have relatives who work so hard, some three jobs a day, working and hoping for a breakthrough for their families back home.”

Vicente Fox, a former president of Mexico and a harsh critic of Trump, also noted on Twitter America’s immigrant history, saying “your mouth is the foulest shithole in the world. With what authority do you proclaim who’s welcome in America and who’s not. America’s greatness is built on diversity, or have you forgotten your immigrant background, Donald?”

In light of Trump’s alleged preference for immigrants from Norway, a number of users on social media were resharing a Norwegian website launched in 2016 aiming to convince Trump-skeptical Americans to immigrate to Norway. “We are offering acute aid to descendants of emigrated Norwegians, and other Americans, considering a new start abroad,” read a welcome message on the website,“in light of the results of the U.S. presidential election.”

Reaction across the United States, home to a large population of immigrants from these countries, was emotional.

Illinois state Sen. Kwame Raoul, son of Haitian immigrants, said there was no “apologizing out of this.”

Republican pollster Frank Luntz quoted a report and said that 43 percent of immigrants from African countries have a bachelor's degree or higher, compared with 33 percent of the American population overall.

43% of immigrants from “shithole” African countries have a bachelor’s degree or higher, compared to 33% of the overall American population.

“Nigerian-Americans, for instance, have a median household income well above the American average.”https://www.bloomberg.com/view/articles/2015-10-13/it-isn-t-just-asian-immigrants-who-excel-in-the-u-s- …

Skilled foreign workers from anywhere in the world do well in the U.S.

Farah Larrieux, a Haitian immigrant and organizer in Miami, referenced statements Trump made in Miami’s Little Haiti neighborhood while campaigning before the 2016 election that he wanted “to be the biggest champion” for Haitian Americans.

“This is beyond politics. The guy has no respect for anyone. I am trying not to cry,” she told CBS. “I can't understand how someone goes from making a statement in Little Haiti saying I want to be the biggest champion of Haiti to calling Haiti a 'shithole.' It makes me sick.”

Journalist Amélie Baron‏ ran down a list of stereotypes promoted about the country in recent years, referencing a flap where a Weather Channel meteorologist claimed that Haitian children were so hungry they ate trees, another statement reportedly made by Trump in 2017 that Haitian immigrants “all have AIDS,” and Trump's remark from Thursday.

“How bad some US citizens judge Haiti,” she wrote.

How bad some US citizens judge #Haiti...