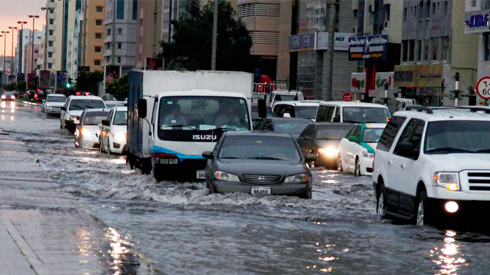 12,537 emergency calls made during rainfall

Dubai Police Command and Control Unit logged up to 12,573 emergency calls during the same period.

Read our guide on how to safely drive in the rain

Lieutenant Colonel Turki Abdul Rahman Bin Faris (left), Director of Command and Control Unit at Dubai Police, urged motorists to be cautious when driving in rainy conditions on the road.

“Motorists should always keep a safe distance between cars and adjust their speed to the weather conditions … allow extra time for your journey and check your planned route. It’s also advisable to slow down as rain makes roads slippery,” Lt Col Bin Faris said.

He said accidents happen during bad weather conditions due to low visibility.

“People must check the weather condition before jumping behind the wheel and they should follow safety instructions and regulations to avoid accidents.”

He urged motorists to leave earlier to reach their offices and to check the weather update to avoid traffic accidents.

In Sharjah, police cordoned off a number of areas in the eastern region due to waterlogged roads, and warned residents to stay away from the valleys and the coast.

Traffic was exceptionally slow on the Dubai – Al Ain Road, and the Shaikh Mohammad Bin Zayed (MBZ) intersection near Dubai Silicone Oasis, as residents left work early in an attempt to beat the evening rush.

Drivers were also faced with more than one hour traffic delays as they made their way into Deira and Bur Dubai, especially on Ras Al Khor Road, Shaikh Zayed Road, Garhoud Bridge and Hatta Road.

Earlier in the day, traffic was much slower than usual with nearly half an hour delays on roads, according to Google Maps.

Road closures have been reported on the Abu Dhabi – Ghweifat road, D67 and Al Asayel Street.

There was a traffic delay on Al Khail Road. If you are on any of these roads, please use caution.

Dubai: Authorities warned motorists to drive with caution as heavy rain lashed across the UAE on Sunday.

In its midday update, the National Centre of Meteorology (NCM) reported rainfall in Jumeirah, Al Ain, Fujairah, and across the northern emirates.

Dubai Police cautioned motorists to drive on paved roads and not to speed on the roads.