Breaking News
Home / In Depth / Have the Syrian armed factions changed their loyalties? 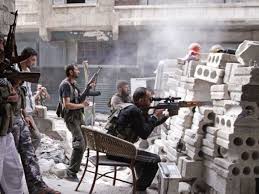 Have the Syrian armed factions changed their loyalties?

The Levant News Exclusive — By Dr. Haytham Mouzahem* — While the alliances of the Syrian regime seem clear and public, opposition and jihadi armed factions are working hard to keep their ties with regional and international parties vague and covert. Until 2014, the regional and international alignments of these factions were not clear.During the first two years of the Syrian war, the parties supporting the armed opposition were inclined to back all armed factions, despite some exceptions imposed by the nature of said factions, their region of influence and ideologies.

Syrian analyst and correspondent Suhaib Anjarini told The Levant News that the supporters’ provision of arms and money to all formed [opposition] groups “aimed at the beginning of the Syrian Crisis at attracting the different opposition groups and encouraging division in the ranks of the Syrian army.”

He added, “The Gulf support triangle formed of Qatar, Kuwait’s Salafis and Saudi Arabia, has succeeded in imposing its pace since the beginning [of the war] by fostering the influence of Salafi groups inside Syria. Consequently, Gulf support was divided unequally: most support was given to groups relying on ‘jihadi principles’ that have tried to remain efficient since their formation, like Ahrar al-Sham, Jabhat al-Nusra and Jaish al-Islam. Less support was given to smaller groups under revolutionary banners such as Martyr Ahmad Khalaf’s Brigade, Martyr Ahmad Khatib’s Brigade, Martyr Abdel sattar AlYunsy Brigade.”

In 2015 and 2016, major developments took place. Some countries restricted their support to certain groups, which resulted in almost complete control of these countries on the groups’ decisions.The strong return of Saudi Arabia to the Syrian spectrum has played at that time a direct role in pushing certain groups to the fore again and to isolate others, by using its “support level” to adjust these changes. Among the results of this restructuring was the formation of “The Islamic Front” which has been presented as the “unified faction” of those groups. Also, “Syria Revolutionaries Front” jumped into the forefront along with the decline of the role of Al-Shamia Front.”

Syrian correspondent Alaa Halabi told The Levant News, “Saudi Arabia, Turkey and Qatar constitute the main countries supporting armed factions within an ideological race (Brotherhood-Salafist) to increase their influence in Syria. Prominent Gulf figures and emirs in Kuwait and the UAE are also participating in this race, as are the US, Jordan and some European states that are offering support to so-called ‘moderate’ factions such as“NourreddienZanki Movement”, “Al-Shamia Front”, MOC groups in Southern Syria, The Kurdish People’s Protection Units(YPG), The Syrian Democratic Forces, New Syrian Army, and others.

Halabi noted that most arms that were given to these factions ultimately reached radical “jihadi” factions and that Israel is offering complete logistic support to factions on border areas in the southern front, including Jabhat al-Nusra.

Halabi said that with time, personal relations developed between some countries and faction leaders like Zahran Alloush, head of Liwa al-Islam then, and Jaish al-Islam later, whose ties were limited to Saudi Arabia. While Al-Tawhid Brigade that operated in Aleppo and its countryside received huge support from the “Muslim Brotherhood” group supported by Qatar and Turkey.

The Southern Front and the Military Operation Center (MOC)

The Syrian arena can be divided into two main fronts: southern and northern. Neighboring countries impose their pace on these two fronts as per their interests and concerns. In the south, Jordan and Israel seem bent on hindering jihadi groups to control this front as opposed to the northern front that was open to the “Jihadis”.

The presence of “Jihadi” environment in Jordan has played a decisive role in Jordan’s decision, due to the danger of the potential spill-over of those fighters to the country.Jihadis were seen by Jordan and its alliesas an effective, but unruly tool. Consequently, support by US and Jordan was not given to one group at the expense of the other. Instead, support was offered to collective operations in which most groups participated under the command of a joint operation centerand the supervision of the US-led MOC. The latter handled the management of the operations’ field during the last quarter of 2014.

A jihadi source affiliated with Jabhat al-Nusra [which was renamed JabhatFateh al-Sham] told The Levant News on condition of anonymity, “Jihadis in Daraa and its suburbs were deceived, as they were deluded into thinking that MOC’s support was unconditional.” The source asserted that “the most dangerous of MOC’s actions was pitting factions against each other. One day, they would support a faction and boycott another. The next day, they would turn the tables. While doing so, they were constantly trying to keep us afraid of each other”, in terms to let them divided, and easing controlling them(Divide and control).

Before 2014, the Saudi influence dominated the Syrian south, but the establishment of the MOC, which Saudi Arabia was a member of it,limited this influence to provision of arms and money only through the center.

A former militant in the Forces of the Martyr Ahmad al-Abdo told The Levant News on condition of anonymity, “Our Saudi brothers backed us unconditionally at first, especially in the battles of east Qalamun. With time, the MOC took over the support and offered it intermittently.”

Forces of the Martyr Ahmad al-Abdo were no longer supervised by Saudi Arabia, after they joined the New Syrian Army (NSA) that was formed end of 2015 with the complete support and supervision of the US.

According to Secretary General of the Authenticity and Development Front (Jabhat al-Asala and al-Tanmiya) Khaled al-Hammad (backbone of the NSA), “NSA members were pooled and trained by the anti-Islamic State (IS) alliance forces and were supplied with ammunition, arms and salaries.”

Hammad told The Levant News, “The credo of the Authenticity and Development Front is Salafi, and our forces are maintaining their presence in Aleppo, Homs, Rif Dimashq, Daraa and east Qalamun.”

Although the MOC is gradually dominating in the south, several groups are still completely loyal to Saudi Arabia, mainly the Syria Revolutionaries Front. The latter was active in the north (Idlib and its countryside) before Jabhat al-Nusra expelled it from the area and pushed it to move south.
The main faction allied with Saudis in Syria is Jaish al-Islam, which is mostly influential in Qalamun and Ghouta. Since its formation by [Zahran] Alloush who was killed end of 2015 it has been known to be completely affiliated with Saudis, in terms of armament, funding and unlimited media and political support. Saudis succeeded in helping their ally [Jaish al-Islam] to make it to the Geneva negotiations in January and February 2016 through its political bureau officer Mohammad Alloush, member of the Supreme Commission for Negotiations that was the fruit of the Riyadh Conferenceon January 20, 2016 [Mohammad] Alloush occupied the position of senior negotiator between December 2015 and May 2016.

Turkey and the Northern front

In north Syria, the situation looks different. Turkey has imposed its pace there despite the US attempts to repeat the MOC experience in north Syria. The Turks were not concerned of creating any suitable environment for jihadis in Turkey, by supporting them in Syria,and offered the necessary facilitations to jihadi groups without except, in accordance with each stage.

Anjarini said that “Turkey has made sure to choose groups that show absolute loyalty based on ideological and racial factors. Turkey took advantage of the Muslim Brotherhood that enjoys historical weight in north Syria. The Brotherhood oversaw the formation of armed groups affiliated with it like Al-Tawhid Brigades, the Safwa Islamic Battalion, Abo Amara Battalion, Jaish Mohammed and the Shamiah Front.”

Racially, the Turkish intelligence directly oversaw the formation of armed Turkmen groups like Sultan Abdul Hamid Brigade, the Seljuq Brigade and Ahfad al-Fatihin Regiment. Since the first months of 2015, the Turkistan Islamic Party formed of Uyghur jihadis appeared. Turkey offered full support to the party as it is a melting pot between the ideological and the racial. All its members are from east Turkestan or the Chinese Xinjiang region.

Anjarini asserted that Turks have a huge role in supporting and directing the Islamist Ahrar al-Sham, which is the largest Syrian faction on the ground, with nearly 25,000 fighters.
The regional influence of the movement was divided between Saudis and Turks until September 2014. A vague explosion in Idlib on September 8, 2014, killed itsmost first-ranking leaders, mainly the founder of the faction, Hassan Abboud. Ultimately, Turks managed to control the movement when new leaders affiliated with the Muslim Brotherhood replaced the deceased ones.

Ahrar al-Sham’s political loyalty to Turkey appeared in several pivotal stages. For instance, Ahrar al-Sham did not join the Supreme Commission for Negotiations that was formed in Riyadh, which many analysts considered a Saudi attempt to monopolize the political and military decisions of the Syrian opposition.

Regarding the groups tied to Turkey or allied with it, Halabi said, “All active factions along the Syrian-Turkish border, which stretches over a distance exceeding 800 km from Lattakia countryside to the extreme northeast, except for Kurdish factions, are affiliated with Turkey. The Turkmen factions and the members of Jaish al-Fatah are among these factions.”

Halabi claimed that Turkey has good relations with IS, amid the increasing smuggling of Syrian oil by IS militants to Turkey. He noted that cameras of international journalists captured photos of IS-affiliated militants who are safely active near border regions. All the factions, including IS, are against the Kurds. This is ; an additional meeting point between the interests of Turkey and the factions.

Are Saudi Arabia and Turkey capable of pressuring these groups and binding them to a truce, a political solution or military escalation? Halabi thinks that Turkey and Saudi Arabia can pressure some factions that completely depend on them by halting their political and financial support. But, active factions on the Syrian ground have managed to build complicated relations and find local sources of funding (self-funding), either through imposing royalties or stealing oil.
As a result, Saudi Arabia and Turkey no longer have the upper hand in pressuring factions, as they can only stop political, military and financial support, close the Turkish and Jordanian borders and offer a political cover for the Syrian army against the factions. Claiming absolute dependency or Saudi Arabia and Turkey’s completeability to pressure all their affiliated factions has no ground to stand on.

Previous Syria—what cost “victory?”
Next Terrorism: A Hard Power Or A Real Threat?

The threat seemed clear. The low-tax countries of the Middle East would have to fall …