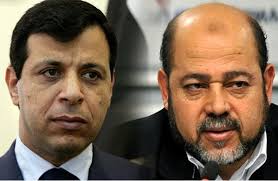 Hamas and Dahlan Coordinate Positions ahead of PLC Conference

By Jasmin Rasheed -- Palestinian reliable sources revealed that Mousa Abu Marzook, member of the Hamas Political Bureau, met the representatives of Mohammad Dahlan to discuss future moves against Abu Mazen.
According to these sources, a week ago, Abu Marzook met in Cairo two close associates of Mohammad Dahlan - Samir Masharawi and the PLC member, Majed Abu Shamala. They discussed the cooperation between the Hamas, Dahlan supporters and other factions for the coming conference of the Palestinian Legislative Council (PLC).
The sources explained that Hamas and Dahlan wish to undermine the legitimacy of the PA chairman, Mahmoud Abbas, and the conference of the Palestinian National Council (PNC) he had initiated. They prefer promoting a PLC conference assuming that it will be more favorable for them.
The sources assess that the Hamas leadership and Dahlan understand that the conference in Lebanon was held after the victory Abbas and the PA had in promoting a UNSC resolution against the settlements. The goal of the conference was to show that Abu Mazen's diplomatic path is effective and strengthens Fatah's position as the leader of the Palestinian people.
In addition, the sources noted that in Hamas' view, following Dahlan's links in Egypt, he is capable of providing solutions to economic and civilian problems in the Gaza Strip. Therefore, Hamas wishes to tighten their ties with Dahlan.
Of note that on January 10-11, 2017, a meeting of the preparatory committee for the PNC conference will be held in Beirut, Lebanon. The PNC chairman, Salim Zaanoun, invited the representatives of all factions, including Hamas. After being promised that they will be able to discuss any topic, Hamas confirmed their participation in the committee. It was published that Abu Marzook is expected to head the Hamas delegation. In addition, Hamas spokesman, Sami Abu Khater, has already released a statement saying that Hamas wishes to re-organize the PNC and re-establish political institutions for the Palestinian people.

Tags:
Hamas and Dahlan Coordinate Positions ahead of PLC Conference