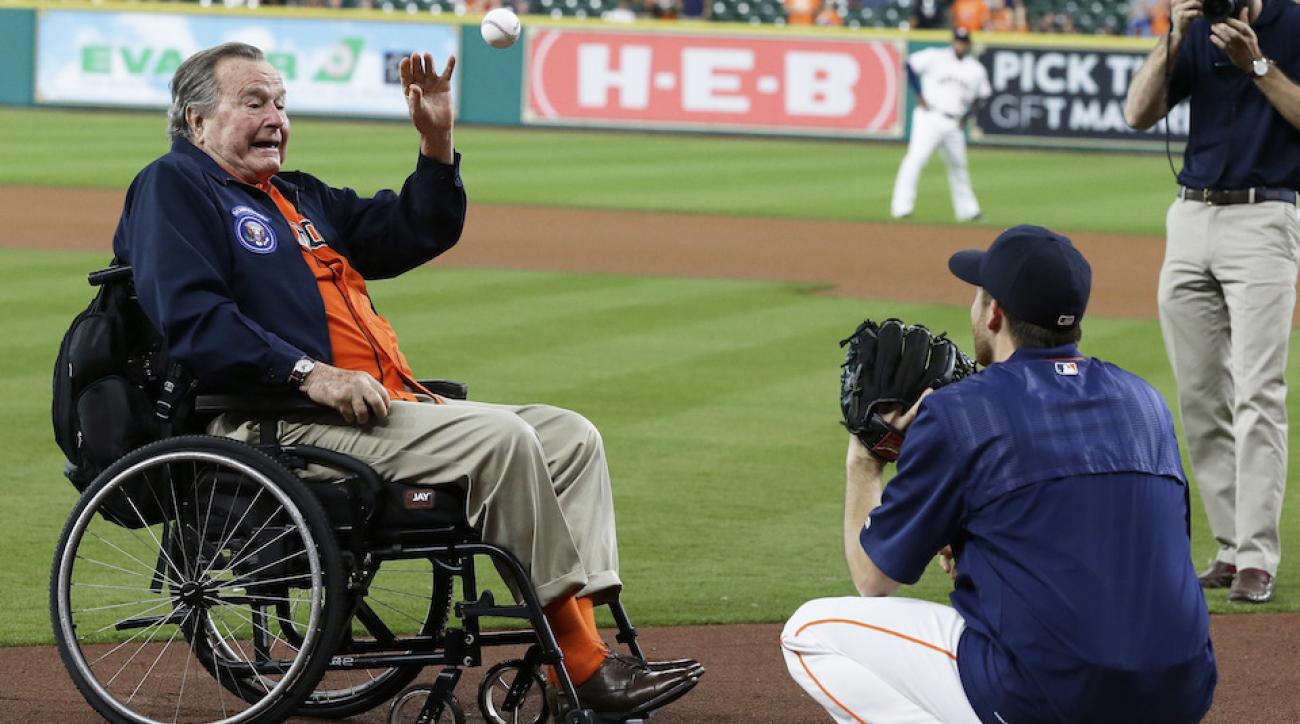 Former president George H.W. Bush apologized after actress Heather Lind said he groped her as they posed for a picture at an event a few years ago — and that his wife, Barbara Bush, saw it happen.

In a brief response to the allegations, which Lind detailed in a recent Instagram post that she has since deleted, a spokesman for the 93-year-old former president did not explicitly deny Lind’s account but said in a statement: “President Bush would never — under any circumstance — intentionally cause anyone distress, and he most sincerely apologizes if his attempt at humor offended Ms. Lind.”

At age 93, President Bush has been confined to a wheelchair for roughly five years, so his arm falls on the lower waist of people with whom he takes pictures. To try to put people at ease, the president routinely tells the same joke — and on occasion, he has patted women’s rears in what he intended to be a good-natured manner. Some have seen it as innocent; others clearly view it as inappropriate. To anyone he has offended, President Bush apologizes most sincerely.

Lind said the incident happened when she met Bush four years ago during a promotion of a historical television show she was working on.

Lind played Anna Strong in AMC’s Revolutionary War-era drama, “Turn: Washington Spies,” which premiered in 2014. She said Bush “sexually assaulted” her as she stood next to him during a photo op.

“He touched me from behind from his wheelchair with his wife Barbara Bush by his side. He told me a dirty joke. And then, all the while being photographed, he touched me again,” Lind wrote on Instagram.

Lind said Barbara Bush “rolled her eyes as if to say ‘not again’ ” when she saw what happened. McGrath said the former first lady has no comment.

Lind also said that a security guard later told her that she shouldn’t have stood next to Bush.

On Wednesday night, another actress came forward with a similar story about the former president. Jordana Grolnick told Deadspin that she was working on a production of “The Hunchback of Notre Dame” in Maine in August 2016, near the Bush family compound in Kennebunkport, when Bush came backstage during intermission and grabbed her as they posed for a picture.

“He reached his right hand around to my behind, and as we smiled for the photo he asked the group, ‘Do you want to know who my favorite magician is?’ As I felt his hand dig into my flesh, he said, ‘David Cop-a-Feel!’ ” Grolnick said.

The other ladies in the picture laughed uncomfortably while Barbara Bush made a remark like ‘He’s going to get himself put into jail!” Grolnick said. Grolnick, who posted a photo of the moment on her Instagram account, according to Deadspin, said she had been warned by other actors not to stand next to Bush.

“What comforts me is that I too can use my power, which isn’t so different from a president really,” she wrote. “I can enact positive change. I can actually help people. I can be a symbol of my democracy. I can refuse to call him president, and call out other abuses of power when I see them.”

Lind said she decided to talk about the incident after seeing a photo of Bush and former president Barack Obama shaking hands at an event last weekend. The two, along with three other ex-presidents, appeared at a benefit concert Saturday in Texas to raise money for hurricane victims.

“I found it disturbing because I recognize the respect ex-presidents are given for having served,” Lind said. “And I feel pride and reverence toward many of the men in the photo.”

It’s unclear when exactly Lind shared the Instagram post or when and why she decided to delete it.

Managers for Grolnick and Lind did not immediately respond to requests for comment from The Washington Post.