BY NIDAL AL-MUGHRABI AND DAN WILLIAMS for Reuters 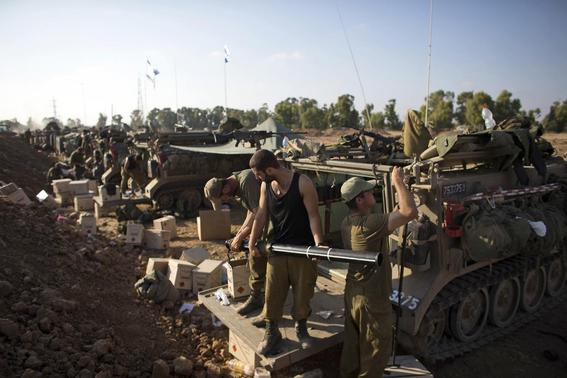 (Reuters) – A fragile truce in Gaza for the Muslim Eid al-Fitr festival was fraying on Monday as Israel’s prime minister saidUnited Nations calls for a long-term ceasefire ignored his country’s security needs.

Israeli forces said they were firing only when fired upon while army engineers hunted infiltrator tunnels from the Gaza Strip’s eastern frontier. They accused Palestinians of firing 17 rockets across the border, causing no casualties.

Palestinian officials said seven people, at least five of them minors, were killed in Israeli strikes, bringing the Gaza death toll from the three-week-old conflict to 1,049, mostly civilians. Israelhas lost 43 soldiers to Gaza fighting and another three civilians have been killed by Palestinan shelling.

Gaza’s dominant Hamas Islamists had called for a pause to the hostilities ahead of Monday’s festival marking the end of the fasting month of Ramadan. But Israel balked, having abandoned its own offer to extend a 12-hour truce from Saturday as Palestinian rockets kept flying.

Foreign pressure on Prime Minister Benjamin Netanyahu mounted on Sunday, with both U.S. President Barack Obamaand the U.N. Security Council urging an immediate ceasefire that would allow relief to reach Gaza’s 1.8 million Palestinians, followed by negotiations on a more durable cessation of hostilities.

Israel wants guarantees Hamas will be stripped of its tunnels and rocket stocks. It worries the Palestinian Islamists will parlay the truce talks mediated by their friends in Qatar and Turkey into an easing of an Israeli-Egypt blockade on Gaza.

“The statement … relates to the needs of a murderous terrorist group that attacks Israeli civilians, and has no answer for Israel’s security needs – among them a demilitarization of the Gaza Strip,” Netanyahu said.

“Israel accepted three U.N. proposals for humanitarian truces and Hamas violated them all,” his office quoted him as saying.

In New York, Ban deplored what he described as a lack of resolve among all parties in the conflict.

“It’s a matter of their political will. They have to show their humanity as leaders, both Israeli and Palestinian,” he told reporters. “Why these leaders are making their people to be killed by others? It’s not responsible, (it’s) morally wrong.”

Israeli officials were more reticent about Sunday’s phone conversation between Obama and Netanyahu in which the U.S. president appeared to link any Gaza demilitarization to a peace accord with the Palestinians that is nowhere on the horizon.

Briefing foreign reporters, Strategic Affairs Minister Yuval Steinitz declined to say if the Netanyahu government might defy its U.S. ally by refusing another formal truce on such terms.

“We will have to consider everything. I am not going to elaborate here,” he said.

The Israelis signaled preference for a de facto mutual halt to fighting rather than an agreement that would preserve Hamas’s arsenals and shore up its status by improving Gaza’s crippled economy.

“The situation now is an unlimited truce,” Israel’s chief military spokesman, Brigadier General Motti Almoz, told Israel Radio on Monday. “The IDF (Israeli Defence Forces) is free to attack after any fire if there is any.”

Residents reported Israeli shelling in east and northern Gaza and the health ministry said two people, including a five-year-old boy, were killed in one of the attacks. An Israeli army spokeswoman said she would look into the incident.

Jibril Jnaid, the boy’s father, said his son, Sameeh, was playing with his cousins when a bullet fired from Israeli forces operating on the edge of Jabalya, the biggest refugee camp in northern Gaza, hit him and he fell bleeding to the ground.

“At the day of Eid, I am proud to sacrifice my son for the sake of victory of the resistance and the victory of the will of the Palestinian people,” the father told Reuters as the boy’s mother and other mourners kissed his cheeks before burial. 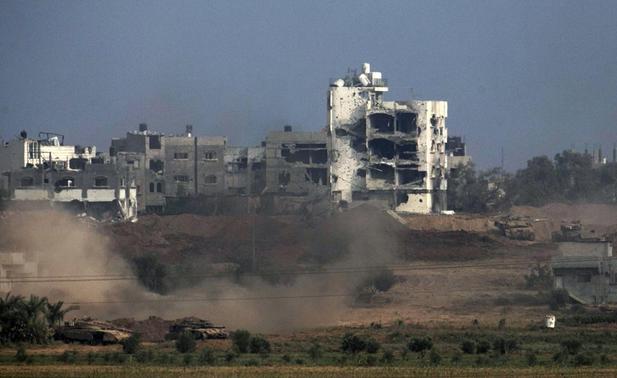 Hamas’s armed wing said it killed two Israeli soldiers in the northern Gaza Strip. An Israeli military spokeswoman said a soldier was wounded there but she knew of no fatalities.

Some residents in Gaza reported they had received a recorded telephone message on Monday which said in Arabic: “Listen Hamas, if you are still alive, you should know that if you continue, we will respond, we will respond violently.”

In another attempt at psychological warfare, Israel dropped leaflets over Gaza listing dozens of names of gunmen from Hamas and its ally, Islamic Jihad, that the military says it has killed since the start of the offensive.

Deputy Islamic Jihad chief Zeyad Al-Nakhala said mediation had made progress and the group was working with neighboring Egypt to craft a deal.

“We are days away from the end of the battle, the clouds will clear and you (Palestinians) will see victory,” he told Islamic Jihad’s radio station Al-Quds, “We will not accept anything less than ending the blockade.”

U.S. Secretary of State John Kerry visited the region last week to try to stem the bloodshed, his contacts with Hamas – which Washington formally shuns – facilitated by Egypt, Turkey, Qatar and Western-backed Palestinian President Mahmoud Abbas. Tension between Netanyahu’s government and Washington has flared over U.S. mediation efforts, adding yet another chapter to the prickly relations between the Israeli leader and Obama.

Repeated U.S.-led negotiations over 20 years have failed to broker a permanent deal. The most recent round collapsed in April, with Palestinians livid over Jewish settlement building in the occupied West Bank and Israelis furious that Abbas had signed a unity pact with old foe Hamas. Qatari Foreign Minister Khaled Al-Atteya said Israel had not respected an ceasefire agreement brokered by Cairo that ended the last Gaza war in 2012 and it was time the blockade of the coastal enclave – also enforced by next-door Egypt – was lifted.

“We have worked with the U.S secretary of state and we were about to achieve substantial results, and the brothers in Hamas acted positively, but the one who rejected the Kerry proposal was Israel,” Al Atteya told Al-Jazeera TV.

The main U.N. agency in Gaza, UNRWA, said more than 167,000 displaced Palestinians had taken shelter in its schools and buildings, following repeated calls by Israel for civilians to evacuate whole neighbourhoods ahead of military operations.