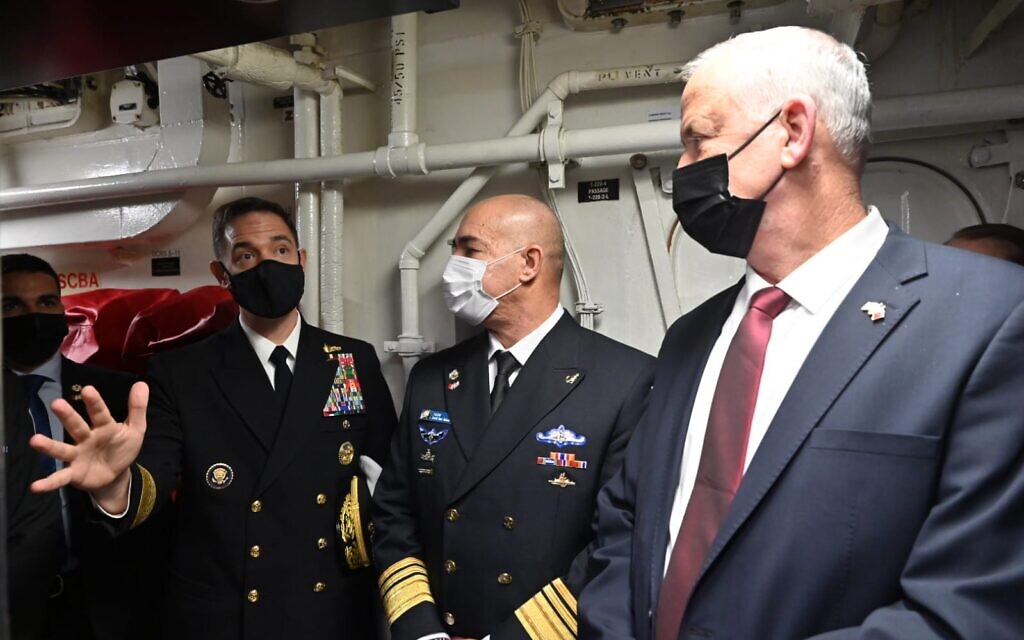 Israel's defense minister on Thursday visited the headquarters of the U.S. 5th Fleet in Bahrain, in a show of cooperation aimed at sending a message toward archenemy Iran.

Benny Gantz toured the U.S. naval base on the second day of his official visit to Bahrain — a strategically located Arab country in the heart of the Persian Gulf. Israel and Bahrain, which share a deep animosity toward Iran, established official relations in 2020.

Gantz was joined by the commander of Israel's navy as well as Bahrain's defense minister on the tour. The delegation visited a U.S. guided-missile destroyer, the USS Cole, and discussed ways to cooperate in the volatile region. With Israel improving ties with Arab countries, the U.S. last year moved Israel away from its European Command and into its Central Command, which oversees the Middle East.

Over the past year, Israel's cooperation with the 5th Fleet has expanded, Gantz said.

"This strategic cooperation is critical in facing developing challenges in the region," he added. "Deepening cooperation will enable us to maintain regional stability and to defend the common interests of Israel, the United States and Bahrain."

The visit comes at a time of growing tensions in the region fueled by the unraveling of the international nuclear deal with Iran and the ongoing war in Yemen. The U.S. and Israel have accused Iran of carrying out a number of attacks on ships in the Gulf, including Israeli-linked cargo carriers, and Iranian-backed Houthi rebels launched a series of recent missile strikes at the United Arab Emirates. Israel has acknowledged stepping up naval operations in the Red Sea, an important waterway in the region.

Gantz's visit also comes as the U.S. leads a naval exercise with the participation of some 60 nations, including Israel and Saudi Arabia.

"This visit highlights the importance of the U.S. 5th Fleet's decades-long strategic relationship with Bahrain and expanding partnership with Israel following the recent alignment of Israel to U.S. Central Command," said U.S. Vice Adm. Brad Cooper in a statement issued by Israel's Defense Ministry. "We are always at our best when we work together with our international partners."

Bahrain and the United Arab Emirates were among four Arab countries that joined the "Abraham Accords," a series of diplomatic pacts with Israel brokered by the Trump administration.

For years, Israel and Bahrain maintained clandestine security ties, rooted in their concerns about Iran. Since the agreement, the countries have opened embassies, signed a series of agreements and established direct flights and business ties.

Bahrain's population is majority Shiite, and the country has been ruled since 1783 by the Sunni Al Khalifa family. Since Iran's 1979 Islamic Revolution, Bahrain's rulers have accused Tehran of arming militants and fomenting dissent on the island, something Iran denies.

Normalization with Israel remains a contentious issue for Bahrain's Shiite majority, which long has accused the country's Sunni Muslim rulers of treating them like second-class citizens.