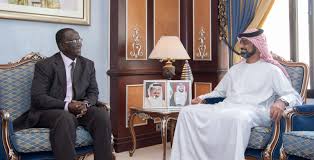 Fansu Bojang, Ambassador of Gambia to the UAE, has expressed his sincere gratitude to the UAE’s leadership for providing humanitarian aid to his country that contributed to alleviating the suffering of Gambian citizens and developing the standard of living.

This said this during his meeting with Hamad Salem bin Kardous Al Ameri, Director-General of the Zayed bin Sultan Al Nahyan Charitable and Humanitarian Foundation.

Bojang expressed his country’s appreciation for the foundation’s charity programmes and projects, especially the construction of the Sheikh Zayed Regional Eye Care Centre in 2007, in the Gambian capital, Banjul, in cooperation with the Sightsavers Global.

The centre, which costs AED7 million, is the first of its kind in Africa and covers six countries in West Africa, provides training to volunteers from the region in nursing to treat the trachoma that is prevalent in those countries. Millions of people have been treated since the establishment of the centre.

Al Ameri, in turn, highlighted the importance of supporting projects that serve the community, especially in the areas of education, health, and social services, in order to increase the economic and educational level in the Gambia.

He also emphasised the foundation’s keenness to continue its humanitarian efforts across the world, especially in Africa, to continue the legacy of the UAE’s Founding Father, the late Sheikh Zayed bin Sultan Al Nahyan, who believed that the UAE’s wealth must benefit others.

Bojang invited Al Ameri to visit his country to assess the need for new projects and monitor the progress of current projects.