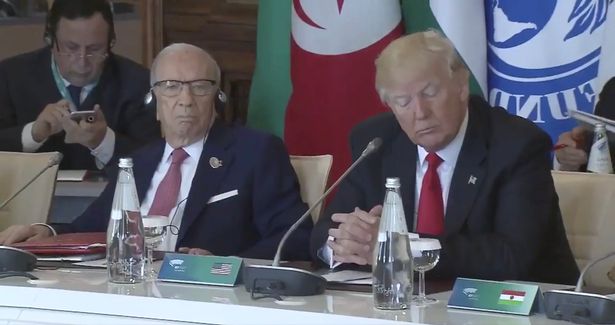 US President Donald Trump has fired off a string of angry tweets criticising America’s closest allies hours after leaving a divisive G7 summit in Canada.
Mr Trump said the US paid “close to the entire cost of Nato” to help protect countries that “rip us off on trade”.
“Fair trade is now to be called fool trade,” he added in response to the threat of new tariffs against the US.
The US actually contributes about a fifth of Nato’s direct funding under a formula based on national income.
But, say analysts, Mr Trump’s argument is that the primary US contribution is as a military superpower, whose own defence spending exceeds that of several allies put together.
Mr Trump’s tirade came after G7 allies criticised his decision to reject a joint communique.
German Chancellor Angela Merkel said on TV late on Sunday that his change of heart was “sobering and a little depressing”. The French presidency had earlier condemned “fits of anger”.
After Mr Trump had left the summit in Quebec he rounded on Justin Trudeau personally, suggesting the Canadian prime minister was “very dishonest and weak” and “acts hurt when called out”.
Trump’s jibe angers Canadians
During a news conference Mr Trudeau had reasserted his opposition to US tariffs on steel and aluminium, and vowed to press ahead with retaliatory moves on 1 July.
Unbelievable
By Jon Sopel, BBC North America editor
In Quebec at the G7 the sherpas, political advisers and draftsmen toiled through two nights to find a form of words that all sides could sign up to.
I left before the end of the summit to embark on a marathon journey from Canada to Singapore.
When I left Quebec all the talk was there would be no agreement. But lo, by the time I landed in Hong Kong to change flights I read that there was a joint communique. Success. Only to see a tweet from Donald Trump a little later rescinding his signature over something Justin Trudeau had said at his news conference. Unbelievable.
Skip Twitter post by @realDonaldTrump
Report
End of Twitter post by @realDonaldTrump

What has Trump said now?
The US president, who is in Singapore for a landmark summit with North Korean leader Kim Jong-un, tweeted on Monday that America was paying disproportionately more towards the costs of the North Atlantic Treaty Organisation (Nato) than fellow members.

The war of words comes after Mr Trump rejected the final communique agreed by G7 leaders
“They pay only a fraction of the cost – and laugh,” he wrote, adding that the EU needed to pay “much more” to help fund the international military alliance, which comprises 28 members including the UK, US, Germany, Canada and Turkey.
What’s happening in this G7 picture?
Trump prefers unscripted Kim summit to G7 ritual
Trump’s ‘obsolete’ comment worries Nato
Mr Trump went on to say that the US gets “unfairly clobbered” on trade despite “protecting Europe at great financial loss”.
“Change is coming!” he warned.
Skip Twitter post 2 by @realDonaldTrump
Report
End of Twitter post 2 by @realDonaldTrump

How did the spat unfold?
Mr Trump said his decision to reject the joint communique was based on Mr Trudeau’s “false statements… and the fact that Canada is charging massive tariffs to our US farmers, workers and companies”.

Jump media playerMedia player helpOut of media player. Press enter to return or tab to continue.
Media captionTrudeau: “I don’t want to hurt American workers”
Mr Trudeau had said that while he did not want to “punish American workers”, his job was to protect Canadians and as such he would press ahead with tariffs on some US imports.
“Canadians are polite and reasonable but we will also not be pushed around,” he said.
Late on Sunday Angela Merkel went on German TV to denounce Mr Trump’s stance. “We won’t let ourselves be ripped off again and again. We will then act too,” she said in reference to US import tariffs.
She did, however, accept that Germany had to pay more for its own security even if it was an unpopular step.
Other G7 partners also seemed stunned by Mr Trump’s reaction, and pledged to support the communique.

In recent weeks, trading partners of the US have criticised new tariffs on steel and aluminium imports imposed by the Trump administration.
What are the tariffs?
On 1 June, the US imposed a 25% tariff for steel and 10% for aluminium on imports from the European Union (EU), Canada, and Mexico. Mr Trump said the move would protect domestic producers that were vital to US security.
The EU then announced retaliatory tariffs on US goods ranging from Harley-Davidson motorcycles to bourbon. Canada and Mexico are also taking action.

Turkey and the Donbass war: Balancing between Russia and Ukraine